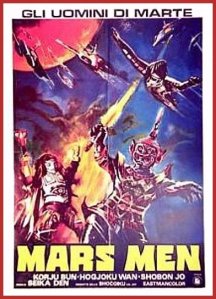 MARS MEN aka HUO XING REN (1976) – What do you get when Taiwanese filmmakers take a co-produced Thai/ Japanese kaiju movie, alter the monsters and the character names then edit in their own actors Mighty Morphin Power Rangers-style?

You get this deliriously weird sci-fi/ monster flick which combines the appeal of Godzilla, Gamera, Jet Jaguar and Ultraman with The Golden Bat and Infra-Man plus a wig or two from Fugitive Alien! Not to mention pirated Pink Floyd music! Who could resist?

Taiwan’s elusive monsterpiece Mars Men has long been the Holy Grail for all fans of kaiju and of overdubbed & re-edited movie mashups from around the world. Huo Xing Ren, as it was called during its Taiwanese run, started out in 1974 as Giant and Jumbo A, a co-production of studios from Thailand and Japan.

Jumborg Ace was a Jet Jaguar/ Ultraman-ish kaiju superhero from a Japanese tv show (all 50 episodes are available for purchase).

The Taiwan release changed Jumborg Ace’s name to American Super Robot in a bit of pandering to the Taiwanese-to-American cultural connection that dated back to the late 1940s.

Yak Wat Jaeng STAYED Yak Wat Jaeng, however, since this heroic monster came from actual Thai mythology and in fact a statue of him guards the Grand Palace in Bangkok.

As to the story: “American Super Robot” grows to giant size and does battle with a menagerie of kaiju-monsters from Mars who stomp on Earth cities while searching for a gem that will help them construct a super-weapon.

Allied with the robot are the normal-sized Thai humans who serve as the film’s replacements for Giant and Jumbo A‘s Protection Association Troop and for The Golden Bat‘s “Friends of Sonny Chiba” as I call his aluminum-foiled sidekicks in that flick. 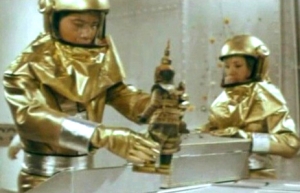 American Super Robot and company are no match for the Infra Man Meets Ogon Batto brigade of gigantic Martian monsters, one of whom wears a Star Wolf (kinda) wig. They need help, so they seek out a small stone idol of Yak Wat Jaeng and expose it to x-rays so that it grows to appropriately enormous size. (In some dubs they say it has already been exposed to radiation and they simply watch it grow.) 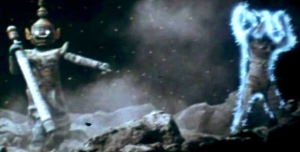 The battle is on … and on … and on … in the typically tedious, repetitious way of kaiju movies. Look, I love the mindless, childlike appeal of these films as much as anybody but in my opinion too many of them have the monster fights go on WAY too long. The lunar final battle in Mars Men is one of the worst examples.

In the end, Yak Wat Jaeng and American Super Robot save the world from the Martian monsters, and, in the Italian-dubbed version of this movie the allies shake hands and say “Grazi!” How can you NOT love seeing a Thai monster and a Japanese ripoff of their own Ultraman starring in a Taiwanese release and thanking each other in Italian!

If you liked the magic of Mars Men then you’ll LOVE the magic of the similar mashup Hanuman and the Seven Ultramen. The Hanuman character simply STANDS IN FRONT OF THE SEVEN ULTRAMEN FILM FOOTAGE to pretend he’s taking part in the same movie. Hilarious! 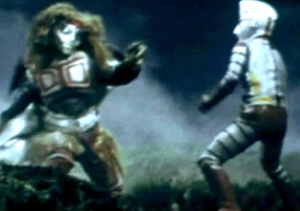 The Hanuman figure is, of course, the famed mythological Monkey Trickster whose father is the wind god. Hanuman’s Far East appeal is such that in some dubbed versions of Mars Men the obligatory little kid pest tries to call Yak Wat Jaeng “Hanuman” instead. It makes about as much sense as the way Indio Black is called Sabata and Maciste is called everything from Hercules to Samson in various flicks.

In addition to the Italian dubbed version of Mars Men (Gli Uomini di Marte), the Turkish dubbed version (Mars Adam) and the French dubbed version (Les Hommes d’une Autre Planete) there IS an English version. Unfortunately that version pleases nobody by periodically using supposedly “funny” colloquialisms in the dialogue, but not enough to make it qualify as a comedy.

Either go all the way with a What’s Up, Tiger Lily?/ What’s Up, Hideous Sun Demon comedy overdub or do a faithful translation. In my view simply tossing in a few jokey references here and there just annoys everyone. 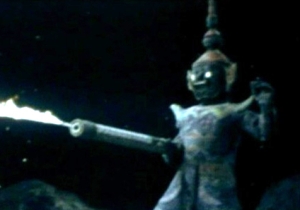 Insert your own “Say hello to my little friend” joke here.

Overall, if you’ve seen enough kaiju movies it doesn’t matter which dubbed version of Mars Men you decide to watch, you’ll still be able to figure out what’s going on. You just may not know the names of all the characters. As if it mattered in movies like this.