A DAY OF JUDGMENT (1981) – This movie plays as if Owensby collaborated with Reverend Estus W Pirkle like Ron Ormond did for the religious zealot/ Cold War potboiler If Footmen Tire You, What Will Horses Do?

You can strip away that movie’s Cold War angle, though, since A Day of Judgment is set in the 1920s American south. Well, 1920s-ISH we’ll say since the usual fun Owensby anachronisms turn up repeatedly in assorted scenes.

Reverend Cage addresses a church that is virtually empty and bores the few faithful who remain by bitching and moaning about how poor attendance has been. He’s leaving town and is basically washing his hands of the place, warning that the increasingly sinful town will get what’s coming to it.

Next we have a series of scenes featuring some of the more sinful citizens of the deep southern town. Adultery, bigotry, covetousness, greed and outright murderous passions lurk behind every corner of this Mayberry-turned-Sodom and Gomorrah. These scenes go on so long even Larry Buchanan would scream “Pick up the pace, dammit!” at the screen.

A sinister, monstrously ugly man in black arrives in town, driving a horse-drawn carriage and sporting a long scythe. This figure is the film’s Grim Reaper/ Angel of Death/ Foolkiller- type menace.

As the citizens’ various forms of evil reach their sinful climax the black-garbed figure steps in and kills each of them.

He doesn’t just use his scythe, however, he bumps them all off in supernatural ways that reek of poetic justice, like when evil figures get their comeuppance in anthology shows like Twilight Zone, Tales from the Darkside and others.

You can shut the film off when the Man in Black dispatches all of his victims in appropriately macabre ways OR you can stay tuned for the goody-two-shoes Christian sermonizing ending. That ending shows the dead sinners waking up and realizing it was all a dream, scaring them all back into attending church on a regular basis and renouncing their “sinful” ways. 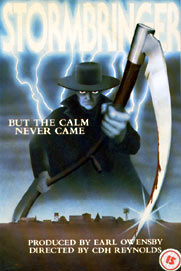 A Day of Judgment was also released under the title Stormbringer to try to make the supernatural vigilante seem like the main character. The main – some would say only – fun from watching this flick lies in ridiculing it relentlessly.

The backstory on this hilarious mess of a movie is legendary among us lovers of Bad Movies: it started out as a moralizing Christian scare film stretched out to feature length. Along the way it was decided it would sell better as a horror film so the Grim Reaper figure was thrown in just to provide scary-looking scenes for the trailer. Ah, the shenanigans pulled by low-budget filmmakers in those pre-internet days!

FOR MY ORIGINAL LIST OF THE TOP ELEVEN BAD MOVIES FOR HALLOWEEN: https://glitternight.com/2011/10/24/the-eleven-most-neglected-bad-movie-classics-for-halloween/