I’ve never made any secret out of the fact that I’m a hopeless silent movie geek. As we get closer to Halloween Balladeer’s Blog will examine the greatest silent horror films of all but for this little teaser I’ll take a look at the best silent horror shorts from 1896 to 1909.

THE HOUSE OF THE DEVIL (1896) – Unless an earlier example turns up this is the very first horror movie with a semblance of a story. This 3 minute film from THE Georges Melies features the Devil setting up housekeeping in a creepy mansion and conjuring up his infernal lackeys like witches, goblins and a living skeleton man to keep him company. Much as the early film world owes to Melies we all know if you’ve seen one of his flicks you’ve seen them all so this will be the last work by him that I cover for this list. His camera trickery and broad characters get old REALLY fast.

FAUST AND MEPHISTOPHELES (1898) – George A Smith, a British stage magician, presents this very brief depiction of Faust selling his soul to the devil named Mephistopheles.

THE MISER’S DOOM (1899) – Like an 1899 Twilight Zone episode this Walter Booth short features a clutching, grasping miser getting his comeuppance in the form of a fatal encounter with a woman’s ghost.

THE FREAK BARBER (1905) – In a sort of “Extreme Sweeney Todd” story a mad barber decapitates his customers until the tables are turned and he himself gets his head chopped off in the finale. 3 minutes of weirdness.

THE THIRTEEN CLUB (1905) – A group of iconoclastic eccentrics intentionally break superstitions by walking under ladders, embracing the number 13, letting black cats cross their paths, etc. Their laughter dies – just like they do – and their bodies are reduced to nothing but skeletons. 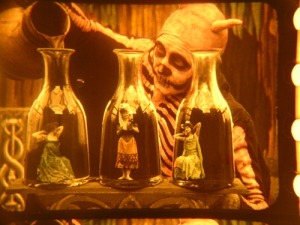 The Red Spectre with the bottled souls of his victims.

THE RED SPECTRE (1907) – 9-10 minute Pathe production which features beautifully rendered red tinting. The central figure is a demon in the depths of Hell clad in a red cape plus a skull mask and skeletal central costume.

The Red Spectre toys with the captive souls of various women until an angel shows up to end his evil deeds and defeats him. The angel is played by a woman with very short hair so it may have been meant to be a little boy angel.

The angel frees the women’s souls, subdues the Red Spectre and places her foot on his back in triumph before donning his red cape herself.

This film is notorious both for its surreal, almost Dali-esque images and for its association with one of the possible suspects in the Zodiac murders in the 1960’s and 1970’s. Ignore comparisons with Melies. This short is much more inventive than the work of that repetitious quasi- hack ever was.

THE DOLL’S REVENGE (1907) – 81 years before Chucky, this short featured a killer doll storyline. When a mean- spirited little boy rips apart his sister’s doll the dismembered doll reassembles its body parts, grows to human size and is then joined by another life-sized doll in ripping the boy limb from limb. Pretty dark for a 1907 movie!

THE GHOST HOLIDAY (1907) – Ghosts and skeletons rise from their graves and joyously dance and frolic their way out of the cemetery. Michael Jackson’s Thriller video goes to the turn of the century!

LEGEND OF A GHOST (1907) – In Pathe’s ground-breakingly long 17 minute film this macabre tale of gothic horror features an imperilled woman facing Hell on Earth in the form of demons, a vampire and a dragon. Toss in a ghost who has an important message for our heroine and enjoy!

THE PEARL FISHER (1907) – In a slimmer 9 minutes this time Pathe presents the story of a male pearl diver being lured by the Queen of the Deep into encounters with monstrous undersea creatures and other odd beasts.

THE PROFESSOR AND HIS WAXWORKS (1907) – In the oldest known Wax Museum horror film a mad scientist brings to life the figures in a wax museum.

THE BLOODSTONE (1908) – A gothic horror story about an accursed ring that brings discord, violence, terror and death to everyone who possesses it.  Lubin Studios produced this little gem (sorry).

DR JEKYLL AND MR HYDE (1908) – This very first film version of the Robert Louis Stevenson story was a slimmed- down presentation of a stage adaptation of the time. Selig Polyscope Company produced this 13 minute classic, which is also the oldest known American-made horror film. The name of the actor playing Jekyll and Hyde has not come down to us and does not show in the credits.

THE DOCTOR’S EXPERIMENT (1908) – A mad scientist injects human guinea pigs with extracts of monkey glands. The unfortunate victims begin to devolve and display the behavioral characteristics of monkeys. (Don’t go there … or there, either.) 10 minutes long.

THE LEGEND OF SLEEPY HOLLOW (1908) – This 14 minute flick was the very first film adaptation of the famous Washington Irving story about the Headless Horseman.

FEATHERTOP (AKA LORD FEATHERTOP) (1908) – The first film version of the Nathaniel Hawthorne tale about a witch who brings a scarecrow to life to do her bidding against the townspeople she loathes.

THE MONKEY MAN (1908) – A mad scientist transplants a monkey’s brain into a human being’s body with predictable results.

THE SNOWMAN (1908) – A snowman comes to life with much more sinister motives than Frosty the snowman ever had.

THE SPECTRE (1908) – 8 minute Pathe short about a cobbler being haunted by the ghost of a man he murdered.

SPIRITUALISTIC SEANCE (1908) – 5 minute film about a seance and the unholy spirits conjured up by the ritual.

THE THIEVING HAND (1908) – In this film with a pioneering premise an artificial hand develops a life of its own, bringing horror to its owner. Vitagraph gave us this 5 minute long piece.

THE BOGEY WOMAN (1909) – Pathe studios strike again with a 7 minute tale about a distaff version of the Bogey Man transforming innocent children into vegetables.

DR JEKYLL AND MR HYDE (1909) – Denmark’s early contribution to the world’s horror cinema. This was a 17 minute version of the famous story but it wimped out with an ending in which all the horror was just a dream. Not that you care but Alwin Neuss starred as the title duo.

ELECTRIC TRANSFORMATIONS (1909) – A mad scientist creates a device that melts metal – and the human beings who get in his way. He’s particularly fond of melting people’s faces with the weapon. (At last – the mystery of Helen Thomas’ face solved!) Percy Stow directed this 7 minute Clarendon production from Great Britain.

THE HAUNTED MAN (1909) – Duskes Productions in Germany produced this first known film version of a Doppleganger story as a young man is tormented by his evil spiritual twin.

THE IMP OF THE BOTTLE (1909) – First filmed adaptation of Robert Louis Stevenson’s short story about a bottled imp who grants wishes with the catch being that whoever dies with the bottle in their possession is damned forever. Edison Company short that ran for 12 minutes.

THE INVISIBLE THIEF (1909) – Pathe’s Ferdinand Zecca directed this 6 minute long film that was the first screen presentation of the H.G. Wells story The Invisible Man.

THE MAN WHO LAUGHS (1909) – Screen debut of the lesser-known Victor Hugo story about Gwynplaine, another man with a disfigurement. In this case a face that is permanently distorted into a demented grin. “Winged freak terrorizes? Wait til they get a load of me!” … Had to be said.

THE MUMMY OF THE KING (1909) – First serious presentation of a mummy story on film. Lux Studios produced and Gerard Bourgeois directed. An archaeologist brings the mummy of THE King Ramses to life with the expected complications arising in this 10 minute story.

THE PRINCESS AND THE FISHERMAN (1909) – This 15 minute flick is a version of an often reworked sailor’s story. A sea hag spares a fisherman’s life and provides him with a princess bride and a castle to live in. The only condition is that he must return to her whenever she blows her enchanted bugle. The day arrives when she does just that but the fisherman fails to keep his end of the bargain with horrific results. Variations of this tale turned up in Kwaidan and Tales from the Darkside: The Movie.

‘TIS NOW THE VERY WITCHING TIME OF NIGHT (1909) – 8 minute movie from the Edison Company that features a man spending the night in a haunted house on a bet. Witches, living skeletons and bats terrify the man during his night-long ordeal.