Halloween Month continues here at Balladeer’s Blog with my take on the top four (of ten) movies in the Hellraiser franchise.

HELLRAISER (1987) – “Jee-zuz WEPT!” Clive Barker helped translate his novel The Hellbound Heart to the big screen in this film. It’s incredibly rare for a novelist to get to DIRECT a movie version of one of his own works but Barker made the most of it.

Frank Cotton (Sean Chapman) has exhausted sexual sensation with women, men, corpses and animals. Seeking new stimulation he solves LeMerchand’s Puzzle Box, a “Rubik’s Cube From Hell” which leaves him at the mercy of the demonic inter-dimensional sadomasochists called the Cenobites of the Order of the Gash.

Suffering unimaginable torments as the M in this S&M relationship, Frank struggles to escape the Cenobites for good, even if it means sacrificing his brother Larry plus Larry’s wife Julia (Clare Higgins) and daughter Kirsty (Ashley Laurence).

The lead Cenobite (Doug Bradley), called Pinhead from the next movie onward, stole the film from Frank and Julia and became the real star of the subsequent franchise. Ashley Laurence’s Kirsty became one of the best “Last Girls” in horror film history.

HELLBOUND: HELLRAISER II (1988) – Kirsty, the survivor of the first movie, is confined to an insane asylum because of the horrific otherworldly events she claims to have taken part in.

It turns out that Dr Philip Channard, the head of the asylum, has been obsessed with LeMerchand Boxes and Cenobite mythology for years, like Frank in the 1st film. He’s even managed to collect a few Lament Configurations and personal effects of human beings who became canonized as Cenobites, including Pinhead during World War One.

At long last – in Kirsty – fate has delivered to him a patient who has had actual contact with those other-dimensional entities. The kinky Dr Channard winds up turning his insane asylum into a branch office of Hell after conjuring up the Cenobites plus Julia from Hellraiser.

Kirsty allies herself with a fellow female patient in a struggle to survive the blood-soaked mayhem unleashed by the foolish Channard. Hellbound: Hellraiser II features some unforgettable imagery including a labyrinthine Hell and Dr Channard’s exquisitely perverse canonization as a Cenobite himself. (“And to think, I hesitated!”)

HELLRAISER: BLOODLINE (1996) – Yes, I skipped 1992’s Hellraiser III: Hell On Earth because I don’t rate that one this high. Anyway, ONLY the Director’s Cut of Hellraiser: Bloodline is good enough to come in third of these top four. It’s easy to see why Kevin Yagher was willing to have his name connected to that longer version versus the hacked-up mess that had to be released as an Alan Smithee film.

Clive Barker himself had creative input into this film, another plus. I’m a whore for horror sequels that flesh out their mythos a bit more, so that makes me virtually alone in ranking Hellraiser: Bloodline in 3rd place.

We viewers get treated to the LeMerchand family clashing with Cenobites and related entities in separate time periods, giving Bloodline a kind of anthology feel. The first section lets us see the LeMerchand patriarch Philippe crafting the very first Lament Configuration puzzle box, appropriately enough for a depraved French aristocrat obviously based on the Marquis de Sade.

Obviously in this Director’s Cut there’s no Pinhead in this first section, since World War One is far in the future. Rest assured he’s in the 2nd and 3rd sections. (That’s one of the reasons the studio butchered the original cut, since they wanted Pinhead front and center IMMEDIATELY.) A proto-Cenobite called Angelique (Valentina Vargas) is the featured monster instead in this pre-French Revolution segment.

The second section is set in the 1990s. Remember that mysterious skyscraper filled with Lament Configuration imagery and architecture at the end of Hellraiser III? Turns out it was designed by the latest member of the LeMerchand bloodline, though they’ve long since Americanized their surname to Merchant.

John Merchant is obsessed with redeeming the family honor by devising a configuration that can ban the Cenobites from our dimension forever. To that end he designed and lives in the bizarre skyscraper that’s laid out like a LeMerchand Box. Pinhead shows up to complicate things and Angelique tags along to tempt Merchant.

The final section is set in the year 2127 on a space station designed and commanded by Dr Paul Merchant, the latest member of our title bloodline. Pinhead and some of the new Cenobites (crafted in the previous segment) attack, intent on finishing off their enemies’ family once and for all.

This installment – in the Director’s Cut – has a nice imitation Alien 1-3 feel to it. Some sneering critics think they’re being geniuses for noticing that and bashing the film for it, but to me it just adds to the fun. SPOILER AHEAD:

In the end, after a long running battle pitting Merchant and his crew against Pinhead and the Cenobites Paul Merchant reveals that he has lured the demonoids into a trap. Space technology has at last permitted one of the Merchant family to fully realize the massive puzzle box needed to banish the Cenobites forever.

Through working certain controls scattered throughout the space station Dr Merchant manages to alter the space station’s shape. It first becomes an enormous LeMerchand Box and is then manipulated into the proper configuration to send Pinhead and company back to Hell permanently.

I wish Clive Barker had done THIS work as a novel instead of the godawful Scarlet Gospels. 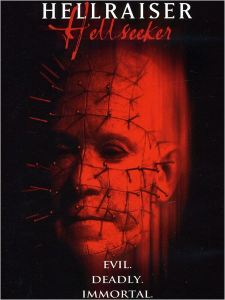 HELLRAISER: HELLSEEKER (2002) – I skipped Hellraiser: Inferno from the year 2000. People are 100% correct when they say that Inferno and Hellseeker are far too similar but since Hellseeker at last brings back the character of Kirsty (Ashley Laurence) I prefer it to its predecessor.

Kirsty long ago decided to just play along to get out of the insane asylum. She pretended to “recover” and admit that her tales of her horrific experiences were just delusions.

She’s been out for well over a decade but is now trapped in an unhappy marriage with a sleazy husband who cheats on her with several women on the side. As an anniversary gift the prick gives Kirsty a LeMerchand Box.

He internally hopes it will drive her over the edge and he can have her committed again, then party with his mistresses more freely. He doesn’t believe that the puzzle boxes really unleash anything supernatural, he just thinks Kirsty really used to be crazy and wants her that way again. You can see where all this is going.

In the end it turns out Kirsty has managed to turn the tables on her slimeball of a husband and his skanks. She had used the puzzle box he spitefully bought for her and summoned Pinhead and the Cenobites. Kirsty made a deal with them to take her husband and the women he was involved with plus his criminal accomplices, but leave her untouched. Pinhead was glad to get multiple victims instead of just the lone Kirsty.

Personally I was hoping it would end with Kirsty willingly becoming a Cenobite herself so she could punish her hubby and his harem in perpetuity. It would have been a nice callback to the first two Hellraiser movies when the Cenobites teased Kirsty that she must be drawn to them.

When Kirsty insisted she didn’t summon them they replied “So you say, and yet we do keep finding each other.” My alternate ending to Hellseeker would have changed the context of that exchange to “Ohhh, turns out she really WAS intrigued by the Cenobites on some kinky, obscene level.”

*** If I was forced to add a fifth Hellraiser movie to this list I would have thrown in Hell On Earth but I feel the others deserve their “meh” direct-to-video reputation. +++

BONUS: FOR THE TRAILER TO HELLRAISER: ORIGINS CLICK HERE  … FOR MY REVIEW OF THE SCARLET GOSPELS CLICK HERE