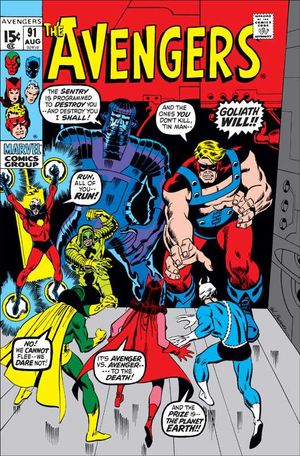 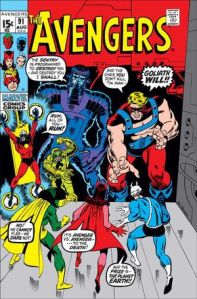 Sentry 459 and the unwilling Goliath are preventing Wanda, Pietro and the Vizh from entering the Citadel and trying to rescue Captain Marvel. Meanwhile on another viewscreen, Ronan and Mar-Vell behold the Avenger called Yellow Jacket – now devolved to cave-man levels – approaching his fallen wife the Wasp, who was just rendered unconscious while fighting the Sentry and Goliath last issue.

Before the action resumes here is some vital data on the Kree Supreme Intelligence, a long-standing cornerstone of the Marvel Comics Universe. 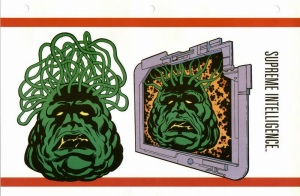 As artificial intelligence is so inclined to do in sci-fi pop fiction the Supreme Intelligence eventually took over as dictator, but since the figure’s genius proved almost flawless militarily the warlike Kree basically said “Meh” and were happy to have him rule them all. I will say again that the fictional history of Marvel’s various alien races is as strong as other pulp sci-fi stories, like in Doctor Who or Star Trek.

The ambitious Ronan the Accuser wanted to overthrow the Supreme Intelligence partly because he blamed the S.I. for the current stalemated state of the Kree Empire’s ancient war with the Skrulls, another prominent alien race in the Marvel Comics Universe. (For the “senses-shattering” origin of that war see The Celestial Madonna Saga.)

The Vision defeats Goliath but then is felled himself by Sentry 459. The Scarlet Witch – who is just beginning to feel attracted to the Vision as he is to her – is so upset at the pain that the Sentry inflicted on the Vision that she is easily defeated herself. Quicksilver grabs Rick Jones and gets the two of them away from the Citadel before Sentry 459 can capture them like it just did Vizh and Wanda.

While trying to find the fallen Wasp, Pietro and Rick come across the tableau of the devolved Yellow Jacket fighting the other cavemen. The watching Ronan says that Hank Pym’s (Yellow Jacket’s) subconscious battle savvy from a lifetime of superheroing is what is letting him triumph against the greater numbers of his fellow raging cavemen and their raging … Nah. Too easy.

Hank’s love – as in tender affection – for Jan slightly penetrates (Again – too easy. Not gonna go there.) the haze of his primordial lust and also helps her to calm him down so that he doesn’t try to ravish her. Quicksilver and Rick decide to renew their attempts to break into the Citadel.

Inside that structure, Ronan the Accuser is still haranguing the captive Captain Marvel – held in place by graviton rays on his limbs. Ronan also has the Scarlet Witch, the Vision and Goliath held captive now by energy-bonds created by Kree technology.

The Vision and the Scarlet Witch are exchanging some of the earliest words of affection that they would ever speak to each other and nearly kiss but the Vision, feeling ashamed at his status as an artificial being made of plastoid flesh, pulls away and tells Wanda he’s not fit to be her romantic partner.

Ronan sadistically taunts the pair of Avengers but Captain Marvel replies with pop sci-fi tropes about how it is humanity’s capacity for “love” which may yet enable them to win out over Ronan and the rest of the Kree, despite the Kree superiority in technology.

Quicksilver and Rick Jones finally burst in, thanks to a fancy trick courtesy of Quicksilver’s super-speed powers. (Don’t bother asking – he’ll apparently never use this very potent trick in the future no matter how helpful it would be. Comic book writers, am I right?)

Quicksilver frees Wanda, the Vizh and the now UN-hypnotized Goliath, while Rick frees Mar-Vell. In the ensuing battle between our heroes on one side and Ronan the Accuser & Sentry 459 on the other, a lot of Kree equipment in the Citadel gets destroyed, unleashing a chain reaction.

In the middle of this chaos Ronan the Accuser gets a sub-space emergency message via Omni-Wave Projector from Hala, the Kree homeworld. Skrull agents have learned of Ronan’s successful coup against the Supreme Intelligence and of his stated plans to intensify the Kree-Skrull War.

The Skrulls have launched a pre-emptive strike against the entire length and breadth of the Kree Empire. Nearly a third of the Milky Way Galaxy is now embroiled in war. Ronan hastily teleports himself back to Hala via an Omni-Wave Projector in his Cosmi-Rod to assume control of the Kree war effort, leaving Sentry 459 alone against the Avengers.

The departing Accuser uses Kree technology to surround the Earth with a Nega-Shield to mark it as a spoil of war for the Empire.

The Citadel continues to crumble and fall apart. The Avengers escape as it AND the Sentry are destroyed. Yellow Jacket and the scientists are instantly back to normal, as is the Alaskan wilderness. The De-Evolution Zone is no more.

Yellow Jacket, feeling almost useless in this adventure, vows to stop being Yellow Jacket and just work with the scientists in his civilian identity of Hank Pym, PhD. The Wasp says she will stay in Alaska with Hank since they are married.

The Scarlet Witch, Goliath, Quicksilver, the Vision, Captain Marvel and Rick Jones fearfully contemplate the next move from the Kree and the Skrulls. +++