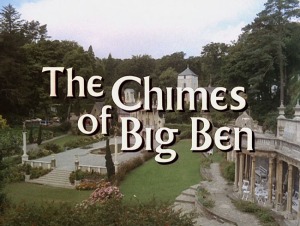 Episode Title: THE CHIMES OF BIG BEN. In the ongoing debate about the exact numbering of the 17 episodes of The Prisoner I place this as the 3rd in the series. Any comments that I have regarding the Alternate Chimes of Big Ben will be made in this same post.

Leo McKern makes the first of his three appearances as one of the Village’s rotating series of Number Twos. Despite his villainous role he gets the audience on his side right off the bat. He does that while watching the surveillance video of Number Six as he wakes up for the day and voices his observation that the Prisoner “Can make even the act of putting on a dressing gown seem like a gesture of defiance.” 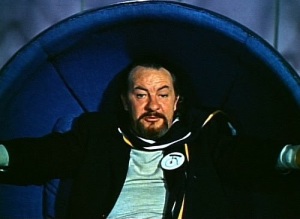 Leo McKern’s character’s verbal fencing with Patrick McGoohan is as much fun to watch as Columbo’s cat and mouse games with the murderers on his show. (And yes, I know McGoohan was no stranger to Columbo, both the 1970s series and the later revival.)

The part where the Prisoner intentionally adds three lumps of sugar to his tea just because Number Two says his file reflects that he takes NO sugar is particularly enjoyable. It’s also one of those scenes that is not appreciated by people who don’t have a nonconformist bone in their body.

McKern as Number Two also proves to be the most informative of those rotating Village executives. His attempts to persuade our protagonist to just tell the Villagekeepers why he resigned and then join their conspiracy go beyond just admitting that he, too, tried to resist when he was brought to the Village. 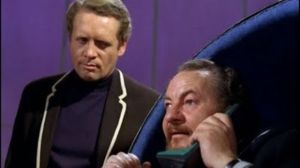 Leo makes it clear that the Village represents the model for the Earth of the future as pursued by highly-placed elements from both sides of the Cold War. He paints a picture of inevitability for the Prisoner in hopes that he can make McGoohan cave in while retaining his sense of personal honor. If a Global “Village” is inevitable there’s no shame in surrendering to it.

It’s like when cowardly conformists justify their spinelessness by citing pretended historical inevitability for the views they’ve been browbeaten into.

Storywise The Chimes of Big Ben presents our protagonist’s first finely-detailed escape attempt. Yes, it’s a bit predictable that the newly arrived Nadia is really a Villagekeeper plant but Number Six does at least wait until she seems to have been subjected to at least as much torture and Head Games as everyone else in the Village before he decides to trust her.

Nadia/ Number Eight claims to be an Estonian government employee who was sent to the Village for the rest of her life because she accidentally saw a map showing the location of the Above Top Secret experimental society. With her information our hero uses the cover of the Village’s art competition to slowly assemble components for an escape craft.

During all this there’s an awkward scene which poses the question “If a tree falls in some stock footage did Patrick McGoohan have anything at all to do with chopping it down?” The answer, of course, is “That would be telling.”

The pointlessness and lack of originality of State-Approved Art is hilariously lampooned in the scenes set at the Village’s Art Exhibit and Competition. The Prisoner is the only competitor whose piece is not just a pandering glorification of McKern’s Number Two. (And, with a smile, I’ll say again that you just have to push aside all the sophomoric jokes that enter your mind over the show’s frequent references to “Number Two.”)

McGoohan’s abstract piece, titled Escape, is praised to the skies by Number Two and moments later, miracle of miracles, the Judges, who were standing nearby when he did it, award the piece First Prize.  That choice of title is also a sign of our protagonist being a little too cutesy. At this early stage he still tends to underestimate the Villagekeepers as well as the depth of their conspiracy.

At any rate, when McGoohan and Nadia make their bid for freedom – after seemingly escaping one of the seaborne Rovers – they fall in with some of her contacts in the Estonian Underground. Our hero and the woman are sent along to London by way of an escape network used by defectors.

A coded message that the Prisoner has the Estonian Underground send ahead to his superiors in British Intelligence will ensure that the phony cargo box he and Nadia are traveling in gets delivered to Secret Service headquarters. Our hero also spontaneously asks a member of the Underground to give him his watch since McGoohan’s own was ruined by seawater in the escape from the Rover.

The Prisoner wanted the watch to make sure the trip to London really takes as long as it should, lest even the seeming Estonians be working for the Villagekeepers. All seems to be going according to plan.

To avoid any interception by co-conspirators of the people who run the Village, McGoohan’s coded message arranged for the phony cargo box to be opened ONLY in the office of Fotheringay, an Intelligence Operative that he trusts. The box is opened and the Prisoner is greeted by Fotheringay AND “the Colonel” – obviously another man known and trusted by our protagonist. London street sounds are heard outside Fotheringay’s familiar office.

Rather than welcoming the Prisoner with open arms Fotheringay makes it clear he distrusts McGoohan and fears he is now working for the Soviets. This seems like plausible suspicion, since Number Six vanished a while ago then suddenly shows up with an “outrageous” story about some prison city called the Village.

After some harsh exchanges, Fotheringay makes it clear that if our hero expects to be believed, his story needs to be taken from the top: Why, for instance, did he abruptly resign? McGoohan begins to answer, but doesn’t get far before he is distracted by the fact that from outside, Big Ben can be heard chiming in eight o’clock.

That matches the time on the watch that neither Fotheringay nor the Colonel knew he had obtained. The problem is IT SHOULDN’T match. Estonia has a one-hour difference from London. With his suspicions now raised, the Prisoner ransacks the office, discovering equipment designed to replicate London street noises.

He is back in the Village. The office is a replica of Fotheringay’s REAL office. Nadia lied about the location of the Village. Not just Nadia, but Fotheringay and the Colonel were all in on it, too, in an elaborate attempt to trick the Prisoner into revealing why he resigned. (If you have a problem with that reread my first two Prisoner posts in which I emphasized the show’s role as allegory and metaphor and NOT an improvised reality like on Star Trek or The X-Files.)

It can be assumed that the pretend-Estonian who foolishly gave his watch to McGoohan and then did not bother advising his superiors about it will be put to death.

In this episode we see that once again The Prisoner used Cold War attitudes to further the deceptive premises lurking in the show. We know now that in the end the Villagekeepers aren’t on EITHER side of the Free World/ Communist World paradigm, it was all just part of the misdirection to keep audiences guessing the first time they watched The Prisoner.

The Chimes of Big Ben is one example of the Villagekeepers rubbing salt in the wound of a Villager after a thwarted escape attempt. As the Prisoner resigns himself to still being a captive after all the toil and hardship, the Public Announcement system spreads a mockingly cheerful broadcast about a new art competition in which the theme will be “Seascapes.”

Pretty cold, but also condescending in a paternal way, as if chiding Number Six for his egotistical, transparent in-joke of titling his art piece Escape. The coldest and most heartless example of this treatment by the Villagekeepers comes at the end of Many Happy Returns.

The alternate version of The Chimes of Big Ben is, to me, just a study in trivia for hardcore Prisoner fans. And yes, that applies to me, but I think the differences are so small that non-fans will simply roll their eyes at them.

*** I agree with editing out the special navigational tool that the Prisoner used in the Alternate Chimes. If he was using a tool that involved sky-readings he’d have immediately been able to tell that Nadia was lying about the Village being in Estonia. Especially IF (and it’s a big if) we go by the Canary Islands locale for the Village, the Prisoner would have seen he was too close to the equator to be in Estonia.