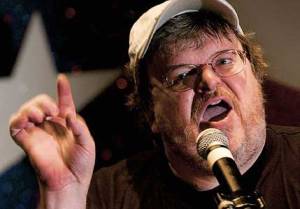 Hey, Michael, why not put your money where your busy mouth is: keep just 2 or 3 million dollars of your money and give the rest away to the 99% that you pretend you support? It might actually give you a moral leg to stand on when you attack de facto Third Party President Donald Trump, the new FDR.

President Trump really has done good works for the working class and the poor through his policies. We all know countless, formerly suffering families who have reasons to be thankful for that. Michael Moore’s self-indulgent propaganda movies don’t seem to benefit anybody but himself.

18 responses to “MICHAEL MOORE: FAKE FRIEND TO THE WORKING CLASS”