PANTHER’S RAGE THIRTEEN – AFTERMATH: A STUDY IN ASHES AND RUIN 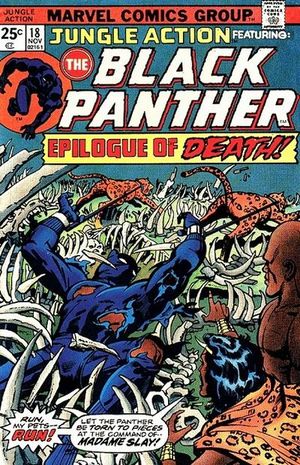 It’s the Epilogue chapter to Panther’s Rage! After Killmonger’s defeat and the foiling of his uprising against the Black Panther last time around, Wakanda City is being rebuilt. Various loose ends are wrapped up as T’Challa must get to the bottom of a series of revenge killings by an obvious Killmonger sympathizer.

XIII. AFTERMATH: A STUDY IN ASHES AND RUIN

Synopsis:  We are told two months have gone by since Killmonger’s death at Warrior Falls and the defeat of his army in Wakanda City ended the war. Much of the capital city is still being reconstructed after all the damage done by Killmonger’s forces, especially his trained dinosaurs from Serpent Valley.

The Black Panther has been sagely overseeing his people during this period of rebuilding and struggling to make food supplies, etc last until stability can be fully restored. He also oversaw the return to Serpent Valley of those dinosaurs still alive at the end of the last issue’s battle royal.

One newly arrived piece of furniture is a piano from America and T’Challa’s Royal Consort Monica Lynne plays that piano while she and T’Challa chit-chat amid the ruins of the partially rebuilt Royal Palace.

Hidden in the jungle Madame Slay plots revenge killings on behalf of the late Killmonger and plans to slay the Black Panther himself.

Venomm (Horatio Walters) is being released on time served because of consideration over his defection to Wakanda City’s side during Killmonger’s army’s inhumane assault on the capital’s hospitals. Not to mention Venomm’s saving of Taku’s life when King Cadaver was killing him.

Taku – the Chief of Communications Technology – is on hand with T’Challa and a Quin-Jet crew as Venomm is released from his chains. Horatio says his farewells with Taku and then the Quin-Jet crew flies off with him to return him to his homeland in America.

Tayette and Kazibe are on hand for another comic relief bit at Venomm’s departure. They too have been pardoned (or something – it isn’t made clear) by the Black Panther, presumably for leading him to Resurrection Altar back in part seven.

And I guess for Tayette saying he hoped that T’Challa would “get” Killmonger in our previous chapter. Just don’t tell the family of that old man Tayette and Kazibe tortured to death for Killmonger back in part one.

Unfortunately the marriage of W’Kabi, the Security Chief, really did fall victim to the war and its strains. Despite the teasing but less gritty possibility of a reconciliation between W’Kabi and his wife Chandra last time around, now that the Security Chief has fully recovered from his wounds – albeit with a bionic arm replacing the one he lost – he must deal with his wife leaving him and taking their children with her back to her home in one of the outlying villages.

Meanwhile, revenge killings are being committed around the Wakandan kingdom by Madame Slay, Killmonger’s heretofore unknown lover. She is accompanied in her mayhem by her HUGE, loyal manservant called Mute and by her trained pack of leopards, including the late Erik/ N’Jadaka’s favorite – Preyy.

NOTE: “Mute?” What a bland name! And Madame Slay said Killmonger named him. From a guy who gave his followers Revolutionary Names like Baron Macabre, Lord Karnaj, Salamander K’Ruel and others, Mute is a sure sign his creativity had been exhausted. I’d expect something like “the Marquis de Silence” or “Silence Majestic” from Erik.

Eventually T’Challa and W’Kabi track down Madame Slay but get captured after a battle with her, Mute and her leopards. In typical fashion for pulp fiction villains, rather than just kill the Black Panther while he’s helpless she keeps him alive to be killed in an elaborate death-trap.

She has a conversation with T’Challa, in which he chides Madame Slay regarding the way Killmonger kept her such a secret all these years just to preserve his “above it all, more than human” image to his followers. She in turn points out that it was a child who killed Erik, rather than T’Challa himself, robbing Killmonger of the martyrdom that should have been his.

Madame Slay eventually ends the conversation by having the two leopards whose collars the Black Panther’s wrists are bound to with rope race off, dragging T’Challa behind them. The two large leopards drag our hero over a long course they’ve run plenty of times with other victims that Madame Slay wanted to die horribly.

That course is laden with rocks and jagged bones that tear T’Challa’s sacred panther uniform to shreds and subject him to some nasty wounds. Before he can be sliced in half by the bladed rock at the end of the course our hero manages to gain his feet, leap over the bladed rock and – impossibly (hey, it’s a comic book) land with one foot on each of the leopard’s backs.

He thus rides them back to Madame Slay’s cavern lair where T’Challa uses the element of surprise to defeat the massive Mute. Madame Slay tries to kill the Black Panther in battle with her spiked wristbands but W’Kabi uses some of the weaponry in his bionic arm to subdue her.

T’Challa and W’Kabi emerge from the cave with Madame Slay and Mute as their prisoners. W’Kabi notes that with Killmonger’s unknown lover now defeated maybe it is all finally over. T’Challa replies that there are times when he feels that it will NEVER be over, a reference to all the literal and figurative scars and ruins left in the war’s wake.

And that wraps up the underrated Panther’s Rage from 1973-1975. I’ll close with yet another remark about how Don McGregor and other Marvel Comics writers blazed trails that are usually credited to the overrated and overpraised Alan Moore even though the Marvel writers got there first. +++

16 responses to “PANTHER’S RAGE THIRTEEN – AFTERMATH: A STUDY IN ASHES AND RUIN”