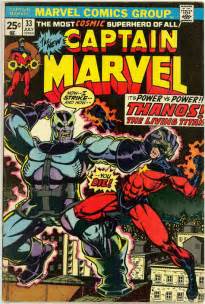 Before I dive into Mantis’ crucial role in this final chapter of the 1970s Thanos War I’ll do a quick look at two supporting figures in that conflict – Drax the Destroyer and Moon Dragon.

These two characters and their relationship with each other have a direct connection to the mysteries surrounding Mantis herself, especially the upcoming Celestial Madonna storyline.

DRAX THE DESTROYER: Just like our Vietnamese heroine Mantis, Drax from the Guardians of the Galaxy movies was introduced in the 1970s. He’s much different in the G of the G films but this blog post deals strictly with his original depiction.

Drax was originally an Earthling named Arthur Douglas. Years earlier he was driving home from Las Vegas with his wife Yvette and his little daughter Heather when they spotted a UFO that was one of Thanos’ scout ships checking out the Earth in advance of a planned invasion years down the road.

The ship blasted the Douglas’ car to kill any potential witnesses. Douglas died in the crash, but Thanos’ father Mentor – wanting to create a nemesis to destroy his mad son – intercepted Arthur Douglas’ soul as it left his body. Mentor encased that soul in an incredibly strong and powerful elemental body.

As Drax the Destroyer, whose sole purpose for existence was the destruction of Thanos, the late Arthur Douglas became a major player in the forces opposing the mad Titan in the Thanos War. Among other deeds he helped Iron Man defeat Thanos’ minions the Blood Brothers.

MOON DRAGON: As for Arthur’s daughter Heather, Mentor took the child back to live with him and his fellow Eternals inside Saturn’s moon Titan. From an early age the girl was rechristened Moon Dragon and was trained in super-powerful versions of martial arts.

Most importantly Titan technology helped bring out and enhance her telepathic and other psionic powers to the point where she outclassed even Charles Xavier himself. (And Moon Dragon debuted YEARS before the bald woman Ilea in Star Trek: The Motion Picture)

NOTE: So, as we’ll see, a) Mantis and Moon Dragon were born at the exact same time in different parts of the world to different parents … b) Each were raised and trained by otherworldly cultures to bring out the most in their physical and supernatural abilities (Mantis by the Priests of Pama, Moon Dragon by the Eternals of Titan) … c) Each is “the other woman” in a romantic triangle (Mantis with Vision and the Scarlet Witch, Moon Dragon with the Black Widow and Daredevil) … AND d) Each recently had an emotionally scarring reunion with a father they’ve never really known (Mantis with Libra, Moon Dragon with Drax the Destroyer).

Synopsis: The Avengers (Thor, Captain America, the Scarlet Witch, the Black Panther, the Vision, the Swordsman and MANTIS) have just landed back at Avengers Mansion after destroying Thanos’ invasion fleet in space. As we saw in the previous installment Mantis’ mutant empathic powers told her some strange change had come over the entire planet during their hours-long battle in outer space.

Thanos, lurking nearby, smugly observed that Mantis was correct. He had willingly sacrificed his invasion fleet because while the Avengers had been off the Earth fighting that fleet of spaceships he had made subtle alterations that have doomed every life form on the planet.

At this particular time in the Marvel Comics Universe the Fantastic Four had disbanded after Mr Fantastic and Invisible Woman got a Separation. The world at large did not even know the Defenders existed and the X-Men were Missing in Action (in 1975 readers would learn they had been held captive by the mutant colony creature Krakoa).

This added to the feeling of urgency in the story since – unlike today – there were not roughly two dozen superhero teams to pick up the slack if the Avengers fell to Thanos.

But for right now the narrative shifts to the Avenger called Captain Marvel (the Kree Captain Mar-Vell). The Thanos War is concluding in his comic book with the Avengers as Guest Stars because Mar-Vell has been at the forefront of the forces battling Thanos.

I’ll omit the many story elements irrelevant to Mantis for simplicity’s sake. Suffice it to say that while the Avengers battled Thanos’ space fleet in Avengers # 125 back in Captain Marvel’s previous issue – # 32 – our mad Titan had become literally a disembodied god thanks to the power of the Cosmic Cube (later renamed the Tesseract).

Mar-Vell and his alter-ego Rick Jones had led the mad god back to the Earth. Thanos reassumed corporeal form to fight Captain Marvel one-on-one. To ensure that the other Avengers could not come to Mar-Vell’s aid Thanos – still as powerful as a god – had shifted the rest of the Earth into a separate Time Continuum a fraction of a second out of synch with the Avengers.

To Thanos and the good Captain it seemed like they were the only two beings on Earth and even though they were fighting on the roof of Avengers Mansion none of the Avengers could detect their presence. EXCEPT, of course, for our homegirl Mantis with her empathic powers.

Mantis was aware simultaneously of BOTH sets of events. To the Avengers and the rest of the world Thanos was announcing himself as the new god, declaring Demiurge style that no other gods should be worshipped but him. To Cap and Thanos their battle was all that existed on Earth.

Presently, Mantis used her absolute control of her body to make herself able to interact with Captain Marvel and Thanos. Drax the Destroyer, whom Thanos thought dead, turned up alive and joined in the attack on the mad Titan.

This gave Mantis and Mar-Vell time to figure out a way to stop Thanos. They realized that even though the Cosmic Cube had been drained of all power by the villain he was still dependent on the Cube’s physical existence to retain the power he had stolen from it. If the Cube was shattered the godlike power would drain from Thanos.

Mantis hands off the Cosmic Cube from her and the Avengers’ time continuum to Captain Marvel in the time continuum with her, him, Drax and Thanos. (But NOT Bob, Ted, Carol and Alice)

With the speed of thought Thanos tries to stop Mar-Vell from karate-chopping the cube to bits by willing him dead. The Captain starts to die but just a nano-second in time manages to destroy the Cosmic Cube.

Thanos screams and fades into non-existence while his mysterious romantic partner now reveals herself as Death.

Showing what a truly ungrateful bitch Death is, she laughs at Thanos’ fate and departs. With Thanos gone Captain Marvel and Earth are restored to normal so all our heroes are in one time continuum.

Amid the rejoicing over the defeat of the mad Titan, Mar-Vell and Mantis share a private moment of mutual adoration – does any man NOT fall for this woman?

Epilogue: And so ended the original Thanos War, a story that had been playing out in multiple issues of The Avengers, Captain Marvel, Iron Man, Daredevil and the Black Widow plus Marvel Feature. +++