RESISTANCE, INC – THE FAUX REBELS OF THE ANTI-TRUMP HYSTERIA

Well, I am STILL having a terrific time watching the political realignment going on here in the U.S. The only change we would have gotten would have come from either Donald Trump or Bernie Sanders and if one of them got in then the two rival gangs of White Collar Criminals called Democrats and Republicans would attack the outsider at all costs.

The attacks would be different in nature but Bernie would now be getting slammed like Trump is by the establishment forces. Most recently United States President Donald Trump withstood the awkward Comey/ Russia/ Impeachment witch-hunt. In related news the Democrats’ Pro-Sharia mobs in their black masks attacked the protests against Sharia around the country. 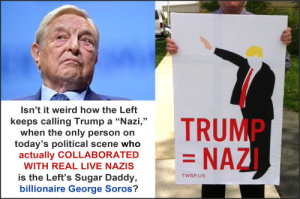 Then there’s the childish drama queens of the self-styled “Resistance.” LMFAO! Yep, the opposition to Trump and his Populism is a rag-tag collection of bloated rich pigs, privileged children of the left, international corporate interests and establishment politicians who’ve been in office for DECADES in many cases.

“Resistance, Inc” or maybe “ResistCo” would be a better name for them. None of these allegedly “rebellious” groups lacks funding and the mask-wearing members gleefully launch physical attacks on anyone who disagrees with them.

The bizarre little people who make up the conformist mobs that oppose Trump are the ones inflicting physical injury on people as well as “filing complaints” around the clock to try to inflict financial or professional harm on their victims. 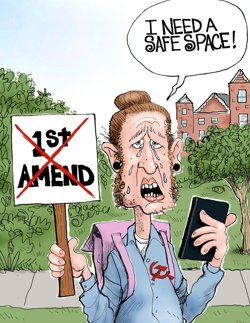 If you can file a complaint and get the Powers That Be to act on your behalf to punish those who disagree with you then you are NOT part of a Resistance Movement … you’re part of the forces of Oppression.

If TEACHERS – the ultimate forces of conformity – are on your side and encouraging your “resistance” (LMFAO) then you are NOT part of a Resistance Movement … you’re part of the forces of Oppression.

If TEACHERS can only threaten your future career prospects if you dare to disagree with the worldview of those secular clergy members then you are NOT part of a Resistance Movement … you’re part of the forces of Oppression.

If you can impose censorship on others while remaining free to express open hatred to anyone who disagrees with you then you are NOT part of a Resistance Movement … you’re part of the forces of Oppression.

If you pretend to be a rebel but you need a Safe Space to deal with the world then you are NOT part of a Resistance Movement … you’re part of the forces of Oppression.

Members of REAL Resistance Movements risk ending their lives in a prison where the last sound they ever hear may be the laughter of the people torturing them to death. Posturing drama queens like you Americans of “The Resistance” figuratively spit in the faces of those courageous people. And you cheapen what they represent with your oh-so-safe play-acting.

In a way it’s another negative feature passed on by the Left-Wing Archie Bunkers of the 1960s generation of “educators.” (LMFAO)

37 responses to “RESISTANCE, INC – THE FAUX REBELS OF THE ANTI-TRUMP HYSTERIA”