Balladeer’s Blog’s month-long celebration of Halloween continues! If you’re like me you’re bored with all of the zombie and pseudo-zombie films and tv shows that seem to come out every few months. Pontypool is at least a zombie film that defies the formula.

PONTYPOOL (2008) – Pontypool is based on the novel by Tony Burgess and is set in a small town in Ontario. The best way to describe this original and thought-provoking movie would be by saying “If PBS decided to do a zombie film I think it would go something like this …”

The movie stars Stephen McHattie who portrays Grant Mazzy, a former shock jock from America. He’s currently languishing on a small station in the backwoods of Canada after his provocative antics got him fired one too many times from radio stations in the States. 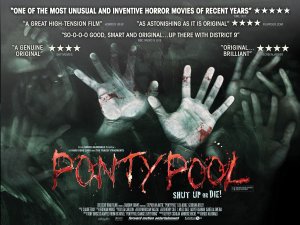 He tries to liven up his boring gig on local radio by suggesting some unorthodox public behavior to his listeners and is as surprised as his female producer Sydney Briar (Lisa Houle) when people around the area begin taking him up on the suggestion. As reports continue to come into the tiny radio station it soon becomes apparent that the population isn’t just extremely receptive to suggestion, many of them have become living zombies with a desire to kill anyone not similarly stricken.

The blood and gore in this flick is minimal so it won’t appeal to many fans of zombie films. Pontypool starts out emphasizing remote reports from personnel sent out by the small station where Mazzy is on the air. These reports and some paniced phone calls to the station make the first part of the movie seem like a zombie invasion version of Orson Welles’ infamous War of the Worlds radio broadcast.

As the story progresses, however, Pontypool becomes more like a zombie version of Eugene Ionesco’s absurdist comedy Rhinoceros, with the zombified citizens representing mindless conformists and the “unstricken” people representing individualists. The film actually betters Ionesco’s metaphor by way of its emphasis on mass media’s role in eroding individuality.

To simplify the premise for the sake of brevity if a person isn’t spouting the same kind of repetitious gibberish that the zombies are they immediately recognize that the person isn’t “one of them” and attack. Beautiful! If you yourself don’t go through life talking about Dancing with the Stars or Miley Cyrus or the latest reality tv hit you can definitely relate!

This allegorical representation of individuality versus the forces of conformity is cleverly handled and goes beyond commercial interests and entertainment. It applies just as much to the political arena and, since I live in this land of fanatics called America, independent voters like me are figuratively surrounded by rampaging and destructive Liberal zombies spouting Obama’s “Hope and Change” or “Diversity” gibberish and Conservative zombies spouting Reagan’s “American Exceptionalism” or “Family Values” gibberish.

To me the only thing marring Pontypool is its needlessly cryptic post-credits sequence.

FOR A LOOK AT SIX OFF-BEAT ZOMBIE FILMS CLICK HERE