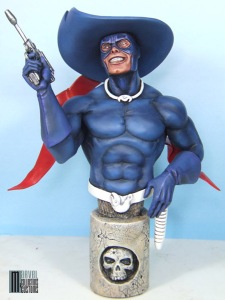 The lives of millions of innocent people are at risk in addition to the Mandrill’s actual targets. One last reminder that, though Foolkiller’s awkward moniker may put off some readers, it’s based on the figure from 19th Century American folklore. 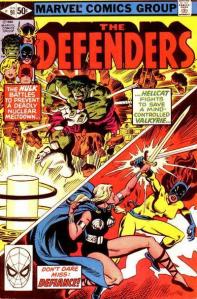 In the chaos of the Federal Court Building the S.H.I.E.L.D. agents surrounding the Defenders (Hulk, Valkyrie, Nighthawk, Daredevil, Hellcat and Foolkiller) prevent them from pursuing the escaping Mandrill and his enthralled female army Fem-Force. A tense argument breaks out between our heroes and the agents, who are led by Jack Norris.

Eventually the Hulk ends the standoff by impatiently leaping up and through the ceiling, causing momentary confusion during which Valkyrie swats away some nearby S.H.I.E.L.D. agents and smashes through a wall to escape. Hellcat simultaneously wrapped herself and Foolkiller in her Shadow Cloak and teleported away.

Nighthawk whispered to Daredevil to slip away to become Matt Murdock again so he’d be safe. Since Nighthawk’s identity was already publicly known at this point he would stay on the spot in custody. Cut to much later as Matt has secured Kyle’s (Nighthawk’s) release on his own recognizance. (Again, Marvel’s in-world fictional Superhero Laws facilitate the story.)

Meanwhile the Mandrill and what is left of Fem-Force are fleeing New York courtesy of an enthralled female cargo pilot who has snuck them onto her huge plane. The frustrated Mandrill makes with a Villain Rant about how he’s running out of options and will now be forced to proceed to his End Game. He vows never to be taken to prison but if he is to die he’s taking all his foes with him.

On board Kyle’s yacht later, Daredevil – for the Defenders’ benefit – is rehashing for the umpteenth time everything he knows about the Mandrill. Valkyrie suggests they focus on his rant last issue during the battle at the courthouse. Mandrill bemoaned how Daredevil, the Black Widow and Shanna the She-Devil thwarted his attempted takeover of the U.S. years earlier, then how the Defenders defeated his Mutant Force and stopped his attempted looting of gold and weapons in Colorado.

Mandrill had also raged about how the Defenders broke up his international arms business and defeated his attempt to steal vibranium from Kiber Island during the Wakanda/ Atlantis War. Thanks to them and the furious Black Panther he’s been running like a rat since then and vowed revenge on DD, the Defenders and his parents, who rejected him long ago when his mutant nature became apparent.

Foolkiller uses his computer hacking skills to track down the current whereabouts of Mandrill’s parents. He tells his fellow Defenders that they are now employed at the Trinity Island Nuclear Facility in Pennsylvania. (Yes, it’s a pastiche of Three Mile Island, which would have still been fairly fresh in the readers’ minds.)

The heroes realize with horror that this might be Mandrill’s destination. Feeling increasingly cornered and filled with more and more frustrated rage he may plan to cause a nuclear meltdown. He could thus kill his parents, the politicians in Washington, D.C. AND plenty of New York City’s superheroes in one blow.

Cut to the Mandrill and Fem-Force seizing the Trinity Island Facility aided by him enthralling every female employee they encounter. Soon he is reunited with his now-captive parents and vents at them.

Back with the Defenders, Hulk and Nighthawk are flying under their own power while Valkyrie is riding her winged horse Aragorn. Hellcat is piloting the Wakandan aircraft donated to the Defenders by the Black Panther. Foolkiller and Daredevil are inside riding along with her.

The heroes reach Trinity Island and overcome Fem-Force in a battle scattered throughout the installation. In all the chaos Mandrill defeats Daredevil and Hellcat in one-on-one battles enroute to the area from which he can trigger the nuclear meltdown, taking millions of people down with him as he dies.

Valkyrie catches up with Mandrill and is easily kicking his butt until the only remaining members of Fem-Force arrive to save him. At this time Valkyrie was still under the Enchantress’ spell which made her helpless in physical attacks by women so Fem-Force is on the verge of breaking her neck.

Mandrill, meanwhile, is about to unleash a nuclear holocaust but Foolkiller arrives and uses a white energy blast from his Purification Gun to blow the  villain to bits. The Fem-Force women are thus freed from Mandrill’s control and stop attacking Valkyrie. As in the original comic book the Hulk uses his body to prevent the meltdown, turning back into Bruce Banner from the process.

Nighthawk, Hellcat and a recovered Daredevil arrive on the scene. Daredevil is furious with Foolkiller for slaying the Mandrill and the two have the usual goody-two-shoes-hero vs antihero argument about the ethics of killing the villains they fight.

Foolkiller’s closing retort to Daredevil is that if he (DD) had killed Mandrill when he first fought him years earlier then all the pain and death the mutant has caused since then would have been avoided. He (Foolkiller) says he would rather have the deaths of some of his foes on his conscience than have the suffering of innocent people on his conscience as Daredevil now does.

Epilogue: The next afternoon, Foolkiller (in civvies) is getting ready to ride off in his van with his guitar, supplies and Foolkiller equipment. Dialogue makes it apparent he has decided to leave the Defenders over the repeated feuding over his methods of dealing with opponents. Also in civilian clothes are Bruce Banner, Matt Murdock, Val, Kyle and Patsy.

Everyone parts on good terms and Greg (Foolkiller) tells them not to ever hesitate to call on him if they need him. He and Valkyrie – his closest friend on the team – say their goodbyes last.

As Greg climbs behind the wheel and gets ready to drive off, Kyle and Matt kid him about being careful in his music career since organized crime likes to muscle in on musical acts. Greg replies that he has always heard that, too, then smiles wryly and observes it would be very “foolish” for crooks to try to muscle him. The other Defenders then laugh as Greg drives off.

*** THIS WOULD LEAD INTO A SOLO SERIES FOR FOOLKILLER IN 1981. I’LL BEGIN POSTING ABOUT THOSE STORIES VERY SOON.