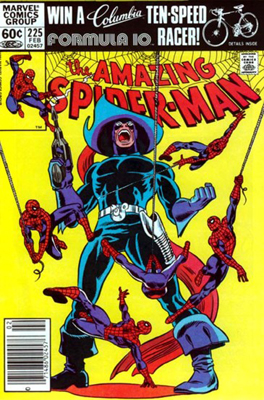 Foolkiller once battled Spider-Man, just like every other hero and villain in the Marvel Universe.

Superhero-Mania shows no signs of abating and Marvel Comics certainly rules the big screen right now. I have a soft spot for comic books because reading them as a kid led me to mythology, one of the big loves of my life. I’ve covered superheroes here at Balladeer’s Blog in the past and with Marvel’s Deadpool, Civil War and X-Men: Apocalypse all out this year I figured I’d explore a character Marvel never seemed to get a handle on: the Foolkiller.

This character’s lingering appeal first seemed to come from his Zorro-esque appearance. Beginning with the second man to don the costume and wield the Purification Gun the appeal started to come from the figure’s potential similarities to the Punisher and Paladin, with overtones of Rorschach before there ever WAS a Rorschach. (Oddly, Marvel tried a 1990 reboot with Foolkiller in which he was much like Deadpool, who didn’t debut until the following year.) 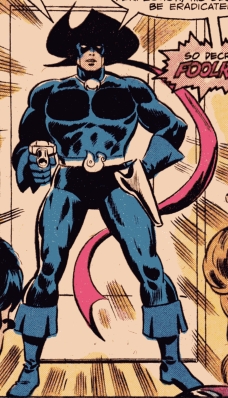 I took an hour or so for some escapist fun and buried myself in the various reboots Marvel attempted for the character over the decades. I would say Marvel REALLY missed their chance way back when Foolkiller faced the Defenders. Nobody asked for it, but here is my issue by issue look at how this misused figure could have been incorporated into the Marvel Universe beginning with Defenders # 74.

For readers unfamiliar with this obscure vigilante/ maniac I’ll pepper in relevant facts as we go along. For starters, outside of the name, this Foolkiller has no connection to the satirical figure from the 1800s American South. Marvel’s original Foolkiller (who died in just his second appearance) was a religious fanatic who killed people that he felt were spiritual “fools” designated by Heaven for him to slay. He donned the cool Zorro-type costume and used a Purification Gun (origin STILL unknown) that fired as yet undefined energies.

The power of those energy blasts varied wildly (you know comic book writing) but could do anything from blasting a regular human being to bits, to annihilating a supervillain called Blockbuster to blasting holes through stone and metal walls or even stunning the incredible Hulk. The unusual fabric of the red sash connected to the Foolkiller’s hat had expandable qualities, like when the figure would use it as a parachute when leaping from a tall building or airplane.

At the time that Foolkiller clashed with the Defenders the man using the costume and Purification Gun was blonde poet Greg Salinger. Unlike the original Foolkiller – the religious zealot Ross Everbest – Salinger’s criteria for “fools” to be killed was more secular, putting him one step closer to Punisher or Proto-Rorschach territory. 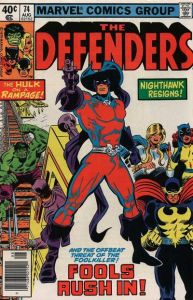 Ah, comic book inking screwups! Though Foolkiller’s costume was colored correctly inside the book, on the cover his costume was mistakenly red instead of his hat-sash.

A. Synopsis of the “real” story – Foolkiller (Greg Salinger) fresh off his encounters with Omega and Blockbuster (well, in comic book retcon time, anyway) travels to the Defenders’ Long Island Headquarters – the Richmond Riding Academy. He claims it’s because he is considering joining the Defenders, whose previously secret existence was recently exposed by “Dollar” Bill English’s televised documentary. In the cliffhanger ending it turns out that, in reality Foolkiller has designated the Defenders as his latest fools to slay.

B. Balladeer’s Blog’s Alternate Treatment – This could have been the start of a long run for Foolkiller with the Defenders and made him a potential hit instead of a never-was. There was no real risk in trying him out as a Defender. Hell, the Defenders had had a hero-villain like Sub-Mariner as a member, the forever-fugitive Hulk was STILL a member at the time as was Nighthawk, a reformed supervillain. They had even had unconventional figures like the feared Silver Surfer, the Son of Satan and Devil-Slayer as members.

That said, the reason there was no risk was that if the fans hated having Foolkiller as a Defender he was easily disposed of after a few months – have him carted off to an insane asylum (like the Defenders really did after defeating him in the next issue), or just kill him off or have the other Defenders get fed up with him and treat him like any other supervillain and send him to jail.

From what I gather the sales figures for the Defenders at the time were already faltering (hence the repeated “Defenders try to subdue their member the Hulk” storylines and covers). The comic book could definitely have used some pizzazz. By this time – 1979 – Wolverine over in the pages of The X-Men had shown that an abrasive, potentially deadly wildcard character could really liven things up.

Foolkiller’s running battle with the Hulk on the train to Long Island in the original story could have spilled over all the way to the Richmond Riding Academy. Nighthawk had just resigned as necessitated by the Federal Investigation into his alter ego Kyle Richmond’s legal troubles stemming from Nighthawk’s questionable past. (Kyle’s secret identity was publicly known by then)

The remaining Defenders at the Riding Academy HQ – the Valkyrie, Clea and Hellcat – could have been drawn to the chaos of the Foolkiller/ Hulk fracas, by now taking place on the Riding Academy grounds. Naturally they would side with their teammate the Hulk and join him in fighting Salinger. Somewhere in the course of the battle a cliffhanger situation could arise. 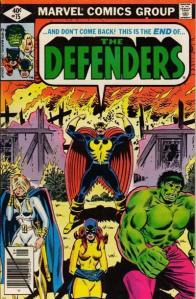 A. “Real” Synopsis – Foolkiller explains his reasons for wanting to kill the Defenders. A monumental battle follows between him and his intended victims, a battle which – largely through the powerful energy blasts from the Foolkiller’s Purification Gun – destroys the main building of the Richmond Riding Academy. News reports of the battle alert the departed Nighthawk about what is going on back at his (Kyle Richmond’s) Riding Academy.

He flies back to help his teammates but arrives just after Foolkiller has already been defeated and the main building is nothing but a charred ruin. Even though Nighthawk – one of the many millionaire playboys in the world’s superhero ranks – has property out the wazzoo he loses his temper.

The strain of his legal troubles, the heavy news presence on the grounds and the whole list of problems caused by the Defenders’ existence now being public knowledge get to him. He throws the Hulk, Valkyrie, Clea and Hellcat off his property and leaves in a fury.

Facing an uncertain future, the remaining Defenders begin to get involved in the problems of Foolkiller’s reluctant acquaintances Amber Grant and Richard Rory (think Rick Jones crossed with Woody Allen). The cliffhanger ending shows us that those problems will lead into the storylines left hanging in the canceled comic book series Omega the Unknown. 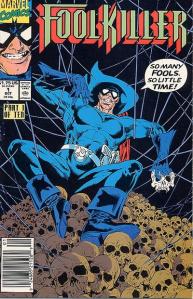 B. Balladeer’s Blog’s Alternate Treatment – First off I hated “Dollar” Bill English and found him to be the Jar Jar Binks of every story he was in. And the whole ridiculous storyline about Too Many Defenders (NONE of whom stayed even though the Defenders roster needed some new blood from a storytelling angle) and the nonsensical Lunatik/ Tunnelworld stories were awful even for 10 or 12 year old children. No wonder The Defenders was a struggling title at that particular time.

I mention all that to say that I would have made the Too Many Defenders story arc Dollar Bill’s LAST appearance. Surely even by 1979 a Greenwich Village would-be Hep Cat like him was a dated character. And as comic relief he was pure Jar Jar.

Anyway, in my handling of things Bill’s television expose of the Defenders would have been a more serious effort, like he and Ledge not only used the recent footage they shot of the Defenders vs Vera Gemini and other foes but would have dug up a few years’ worth of “sightings” of the Defenders in various adventures around the world since some of them were witnessed.

The documentary would have had the conspiratorial air of the many 1970s schlockumentaries that covered UFO’s, Bigfoot, the Loch Ness Monster, the Kennedy Assassination, etc. The slant would have been that “a Top Secret team of superheroes, including some of the world’s most powerful and controversial beings, has existed in secret for years.” I mean hey, give the Defenders some dignity. Captain Nice episodes were less ridiculous than Bill’s real documentary. 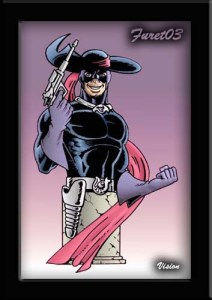 Anyway, in the Balladeer’s Blog Universe the Foolkiller would have been sincere about wanting to join the Defenders. After seeing the television expose he would have found himself attracted by their mysterious air, loose-knit organization and penchant for enlisting figures no other super-team would touch. (This was at a time when the Hulk had only lasted 2 issues as an Avenger)

Richard Rory and Amber Grant would have tagged along hoping to convince the Defenders to subdue this violent maniac fate had plonked in their laps. They would be the only “civilians” there, since in my world Dollar Bill and Ledge would have been gone for awhile.

Getting to the story, the battle between Salinger and the Defenders (Hulk would still be there, not off rescuing a whale like in the real comic book) would have picked up from where it left off in the previous issue’s cliffhanger. I envision Foolkiller using his Purification Gun’s energy blasts like Cyclops used his optic blasts in conjunction with his agility, making him a legitimate threat against multiple super-powered opponents.

At some point Clea’s magic or the sheer strength of Hulk or Valkyrie would have led to Salinger being captured and after being taken inside the main building he would breathlessly explain that he wanted to join the Defenders. In true comic book superhero fashion the team would view his mere survival in battle with four such powerful superbeings as a testament to his abilities.

To get close to closing the deal the Foolkiller would make the same arguments I made at the beginning of this article about why he would fit in with the Defenders. The team might even feel that, similar to how the Defenders serve to keep a wary eye on Hulk and try to keep him out of trouble they might do the same for Foolkiller, who could certainly come in handy against the Defenders’ bizarre Rogue’s Gallery of foes.

In typical comic book fashion, just as the assembled Defenders begin to relax and welcome their new member Richard Rory and Amber Grant would arrive on the scene after having been separated from Salinger during his train battle with the Hulk. The pair would blurt out that Foolkiller was a madman or otherwise reignite the tension and THEN the battle that destroyed the Richmond Riding Academy HQ of the Defenders would break out.

Nighthawk would arrive like in the real story and throw Hulk, Valkyrie, Clea, Hellcat and Foolkiller out and, though unsettled by Foolkiller’s continued presence, Richard Rory and Amber Grant would get the Defenders and their new teammate involved in the unresolved saga of Omega the Unknown. +++

THIS IS JUST THE BEGINNING! FOR PART TWO CHECK BACK TOMORROW AS I INCORPORATE FOOLKILLER INTO THE NEXT FEW ISSUES OF THE DEFENDERS!