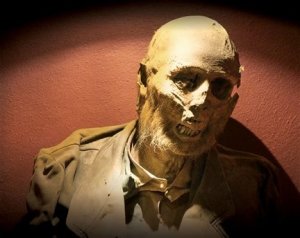 Balladeer’s Blog’s month-long celebration of Halloween continues! Recently I reviewed the neglected 1890’s horror stories The King in Yellow and The Great God Pan, two excellent pieces of Halloween reading. This time around I’ll examine The Squaw Hollow Sensation, originally published in serialized form in the California newspaper The Mountain Democrat from May 31st to July 26th, 1879. The story was set in Squaw Hollow, California, near Placerville in present-day El Dorado County. In fact the El Dorado County Historical Museum was where I obtained my copy of the story for this review.

Our main character is Berlin’s Doctor Loerder Von Herbst, a man trying to prove that ancient Egyptians migrated across the Atlantic Ocean and that the Aztecs were really a colony of Egypt. His studies have led him throughout the American West, northern Mexico and part of California, wherever he believes the legendary region of ancient Aztlan to have been. Von Herbst theorizes  that the preserved figures called Aztec Mummies are not corpses but rather living beings who were put into a centuries-long sleep and can be revived.

The good doctor has created a special chemical solution that in experiments has restored body parts from dissected corpses to a condition resembling living tissue. He believes he can use this chemical solution as part of a procedure to bring an Aztec Mummy back to life. Ancient papyri refer to “Heaven’s fire” and Dr Von Herbst is convinced that means lightning and so he plans to use electricity generated from a Daniell’s Battery to aid in the resuscitation process.

With the aid of various assistants the doctor investigates an Aztec tomb uncovered by mining operations. Inside that subterranean tomb are 50 mummified Aztec bodies that are over a thousand years old. With this bonanza on his hands Doctor Von Herbst sets up a laboratory in the massive burial structure and

sets to work, carefully keeping a secret of the bodies he and his assistants have discovered. He begins by soaking the mummies in large vats full of his restorative chemical solution which replenishes the bodily fluids of the dehydrated bodies.

Upon finding that the ages have damaged some of the bodies too severely to be fully revived, Von Herbst dismembers them and begins experimenting on the limbs with electricity to get an idea how much voltage might restore movement and capacity for thought without damaging the bodies further. The narrative’s descriptions of the doctor’s mummy-filled lab with various dismembered body parts floating in glass containers waiting for electrical experimentation are enjoyably ghoulish.

Only one of the mummies, named Sethos according to the doctor’s translations, is in good enough condition to be completely revived. When his chemical solution has restored enough moisture to the body of Sethos, Von Herbst at last launches his resuscitation experiment. The doctor pumps milk through the body to ensure the veins are all opened, then pumps sheep’s blood in. If this was being dramatized the ridiculous notion of sheep’s blood could be replaced with human blood, maybe by having the doctor or one of his aides drain a living human in a transfusion, say if the victim was trying to blow the secrecy Von Herbst is trying to maintain, that could be the motive.

Finally, running electrical current through the Aztec Mummy, with different voltages for the muscles and for the brain, Dr Von Herbst at last succeeds in reviving Sethos. Nursing his revived patient to full recovery over the course of weeks the doctor at length moves the Aztec Mummy to a room in his suite at the Hotel Continental in Ringgold, CA. At last the day arrives when Von Herbst makes his grand experiment public and invites various academics to the hotel to meet and interview Sethos, who is wearing 1870’s clothing and still acclimating himself to his restored mobility.

The Aztec Mummy is hideous from the ravages of time, but appreciates the miracle involved in Dr Von Herbst accurately translating the proper method of resuscitation. Sethos recounts his tale, confirming Von Herbst’s theory that the Aztecs originally came from Egypt. After centuries in the New World they had perfected the Egyptian mummification techniques they brought with them to the point where bodies could be placed in suspended animation for eons like his was. He and his forty-nine companions were put into slumber by drinking the Draught of the Everlasting Covenant, with the intention of preserving Aztec culture and the secrets of their religion and eldritch science.

Anne Rice fans who get into the tales of centuries-lasting woe told by the undead figures in her Vampire Chronicles would no doubt enjoy the tale related by Sethos. Since he and his colleagues, including his true love Talaka, were not dead and yet not truly alive their spirits wandered the region like ghosts, observing Aztec history without being able to affect it or make their presence known. The Fifty witnessed the passing of all their friends and loved ones, saw generations come and go and the size of the Aztec Empire change over the course of time.

Some of the preserved bodies of the Fifty began to break down due to Earth tremors and moisture leaking into their tombs, and as those bodies died their wandering ghosts vanished to the Afterlife, slowly whittling down the numbers of the wandering Aztec spirits. Sethos’ true love Talaka died by the time of the arrival of the Spanish, adding to his grief as he saw the Aztecs fall. As more of the preserved bodies died, more and more of Sethos’ ghostly companions dropped off over the years while they watched history take its course. First their people’s former territory became colonized by Spain, then Mexico became its own nation, and then came the war between Mexico and America, following which California became part of the United States.

Sethos observed the gold rush and the arrival of more and more settlers from the East, learning to speak English as he had learned Spanish, by having nothing to do but learn while dwelling for so long among the living without being detected. Finally, after more than a thousand years Dr Von Herbst’s expedition had unearthed the fifty Aztec Mummies. The doctor had unintentionally snuffed out the lives of Sethos’ few remaining companions with his handling of some of the fragile mummies and their ghosts, too, flickered away to the Afterlife, leaving him as the last of his people.

The centuries of slumber that the body of Sethos had been enduring awoke powerful telepathic and hypnotic powers in his inactive brain, and the Aztec Mummy proves capable of mentally controlling Dr Von Herbst and other humans. His mesmerism of his new thralls is enhanced by the gaping hole left in the center of his forehead by Von Herbst when he drilled into it to attach electrodes from his Daniell’s Battery.

Sethos plans on restoring the worship of the gods of his people, complete with large- scale human sacrifices. Those large-scale sacrifices will be enhanced by the combination of Industrial Age machinery and the eldritch, blood-based magic of the Aztecs. (And all of this was written six decades before the Final Solution.) Dr Von Herbst and his academic colleagues, now totally enthralled by Sethos, are merely the first of his soon-to-be- millions of obedient disciples.

Squaw Hollow deserves to be as much a part of American folklore as Sleepy Hollow and it is unfortunate to the point of tragedy that this 1879 story is so little known. A title change to The Squaw Hollow Mummy might help a little. The Halloween season seemed the perfect time for me to offer this commentary on it, and hopefully more and more people will come to appreciate this story, which came long before the campy Aztec Mummy movies of the 1950’s. Or before the Egyptian mummy movies of the silent era onward, for that matter.