FAUST: LOVE OF THE DAMNED (1987) – Written by David Quinn with artwork by Tim Vigil. Halloween Month continues here at Balladeer’s Blog with this review of the 1987-2012 “adult” comic book series Faust. This series included very graphic and very unusual sex and violence while offering a twisted update on the story of Faust selling his soul to Mephistopheles. The year 2000 Brian Yuzna (’nuff said) movie version of Faust: Love of the Damned is pretty bad but does capture the blood-soaked, anarchic WTF air of the series.

Before I get into plot details I’ll point out that, despite the criticism that Quinn and Vigil get for providing stories featuring extreme sex and gore in a purely sensational manner they never sold out their indy comic vision by watering down either the sex or the violence just for wider distribution and more money. END_OF_DOCUMENT_TOKEN_TO_BE_REPLACED 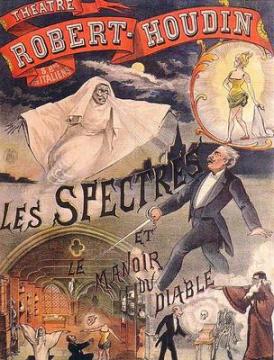 I’ve never made any secret out of the fact that I’m a hopeless silent movie geek. As we get closer to Halloween Balladeer’s Blog will examine the greatest silent horror films of all but for this little teaser I’ll take a look at the best silent horror shorts from 1896 to 1909.

THE HOUSE OF THE DEVIL (1896) – Unless an earlier example turns up this is the very first horror movie with a semblance of a story. This 3 minute film from THE Georges Melies features the Devil setting up housekeeping in a creepy mansion and conjuring up his infernal lackeys like witches, goblins and a living skeleton man to keep him company. Much as the early film world owes to Melies we all know if you’ve seen one of his flicks you’ve seen them all so this will be the last work by him that I cover for this list. His camera trickery and broad characters get old REALLY fast.

FAUST AND MEPHISTOPHELES (1898) – George A Smith, a British stage magician, presents this very brief depiction of Faust selling his soul to the devil named Mephistopheles.

THE MISER’S DOOM (1899) – Like an 1899 Twilight Zone episode this Walter Booth short features a clutching, grasping miser getting his comeuppance in the form of a fatal encounter with a woman’s ghost.

THE FREAK BARBER (1905) – In a sort of “Extreme Sweeney Todd” story a mad barber decapitates his customers until the tables are turned and he himself gets his head chopped off in the finale. 3 minutes of weirdness.

THE THIRTEEN CLUB (1905) – A group of END_OF_DOCUMENT_TOKEN_TO_BE_REPLACED