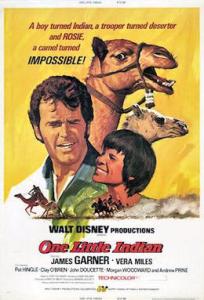 ONE LITTLE INDIAN (1973) – Light-hearted family western. James Garner portrays Corporal Clint Keyes, who, after clashing with his Indian-hating superior, escapes a potential hanging for it and rides off into the desert with a pair of camels left over from the ill-advised American Camel Corps attempt in the 1800s.

Clay O’Brien was the title character, Mark, a white boy who had been raised by Native Americans and who winds up tagging along with Keyes, Lone Wolf and Cub-style. Vera Miles plays the widowed Doris McIver and a very young Jodie Foster has the role of her daughter Martha. (“Why did you say that NAME!?”)

Morgan Woodward portrays the bad guy Sgt Raines, who relentlessly pursues Keyes to bring him back to be executed for mutiny and desertion. Robert Pine, Andrew Prine and Dallas‘ Jim Davis are in the cast as well. Naturally there’s a happy ending with Mark, the widow McIver and her daughter serving as a pre-packaged family for Garner’s character in the finale. END_OF_DOCUMENT_TOKEN_TO_BE_REPLACED