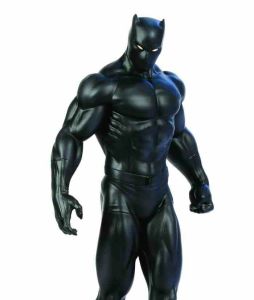 Here’s Balladeer’s Blog’s examination of Don McGregor’s 1973-1975 Black Panther story Panther’s Rage. I’m no comic book expert but in my opinion Panther’s Rage surpasses much of the work done by the overrated and overpraised Alan Moore.

This Marvel Comics figure first appeared in 1966 as a guest star alongside the Fantastic Four and Captain America before joining the Avengers. 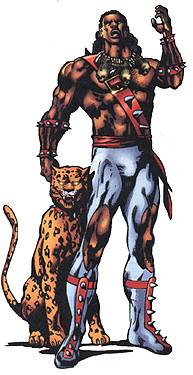 Here are chapter by chapter links to my review –

ONE: PANTHER’S RAGE – Prince T’Challa, the Black Panther, returns to his isolated African kingdom of Wakanda to try to put down a violent rebellion led by a Wakandan calling himself Erik Killmonger. CLICK HERE

THREE: MALICE BY CRIMSON MOONLIGHT – Killmonger sends a super-powered woman called Malice to help Venomm escape from the Royal Palace’s prison on the same night that T’Challa is undergoing his renewal of the Panther Herb ritual. CLICK HERE   END_OF_DOCUMENT_TOKEN_TO_BE_REPLACED 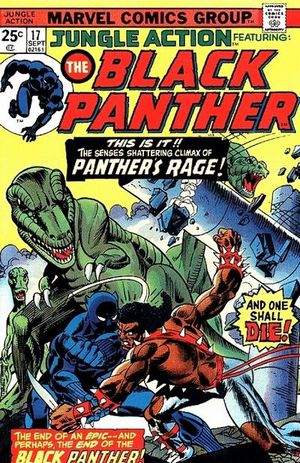 XII. OF SHADOWS AND RAGES

NOTE: This is the climactic chapter (Or T’Chapter if you prefer) of Panther’s Rage. The next, thirteenth part is the epilogue. The showdown between the Black Panther and Killmonger takes place this time around.

Synopsis: As this installment opens up, Erik Killmonger’s rebel army has begun its final, lightning campaign to overthrow T’Challa as the Chieftain of the Wakandas. Killmonger (N’Jadaka), his supervillain operatives Venomm and King Cadaver plus his comic relief lieutenants Tayette and Kazibe are all on hand.

Erik has committed all of his remaining troops to this assault, with many of his soldiers serving as Mounted Regiments riding into battle atop the dozens of dinosaurs that Killmonger and his men rounded up in prehistoric Serpent Valley recently.

Through training and electronic bits placed in the dinosaurs’ mouths these captive monstrosities are proving very effective at destroying and crushing all the beautiful monuments and government buildings of Wakanda City. The high-tech weapons and vibranium shields and spears wielded by Killmonger’s troops are taking a deadly toll as well.

The Black Panther’s own forces are trying to counter this brutal, devastating attack but are without their usual leader, W’Kabi the Security Chief. W’Kabi is still hospitalized after he was seriously wounded in Venomm’s escape from prison days earlier.

As a contingent of brontosauruses and their human passengers/ soldiers begin reducing the Royal Palace to rubble, our hero the Black Panther officially joins the fray, hurling himself from the crumbling rooftop to take out several of Killmonger’s mounted troops in his agile descent.

T’Challa’s Royal Consort, African-American singing star Monica Lynne, soon shows up at her man’s side, commenting on how she had no idea how terrifying these beasts would look in person. (And remember, this story came out long years before Jurassic Park and Dino-Riders.) For his part the Black Panther is horrified to see so many products of Wakandan culture and history being wiped out so swiftly and mercilessly by Killmonger and his army. END_OF_DOCUMENT_TOKEN_TO_BE_REPLACED

PANTHER’S RAGE ELEVEN: AND ALL OUR PAST DECADES HAVE SEEN REVOLUTIONS 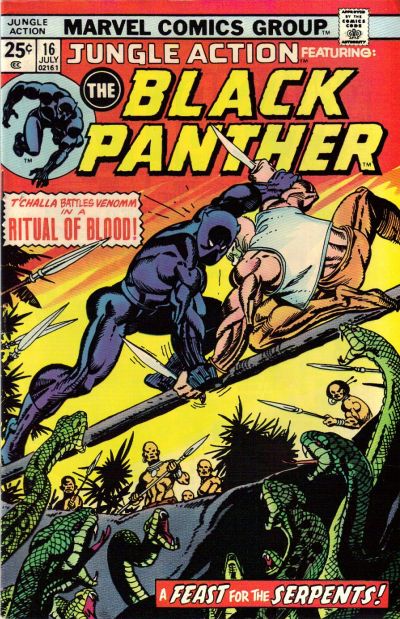 XI. AND ALL OUR PAST DECADES HAVE SEEN REVOLUTIONS

Synopsis: The Black Panther has been back from his pursuit of Killmonger through Wakanda’s Hidden Realms for several days now. Thanks to the super-powers he has from the Panther Herbs AND to Wakanda’s advanced medical technology T’Challa has fully recovered from his wounds.

Salamander K’Ruel, the minion of Killmonger defeated by the Black Panther last time around, has been imprisoned in the Royal Palace just like Venomm, Malice, Baron Macabre and Lord Karnaj. T’Challa has brought all his advisors and his Royal Consort Monica Lynne up to date on everything that happened the previous four installments. 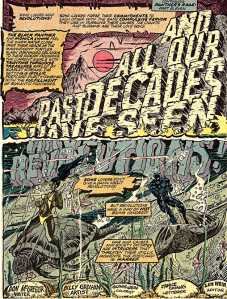 Our main character and Monica are frolicking on a beach at Twisted Visions Lake. They are swimming, riding giant trained turtles and having fun like consenting adults will have. Author Don McGregor has the two lovers exchange the kind of reasonably romantic dialogue that he would later have Sabre and Melissa Siren regularly spout to each other in his post-apocalyptic series titled Sabre.

Meanwhile, back at the Royal Palace, Taku, T’Challa’s Chief of Communications Technology, is in the middle of one of his daily visits with Venomm/ Horatio Walters, one of Killmonger’s supervillain operatives. W’Kabi, the Security Chief, eventually sits in with them. 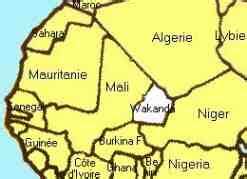 Venomm at last reveals how he – a white (but horribly disfigured) man from America – was brought to Wakanda by Killmonger. He talks about how N’Jadaka/ Killmonger had already recruited him as a follower years ago, even before he (Killmonger) gained an audience with the Black Panther at Avengers Mansion in New York City.   END_OF_DOCUMENT_TOKEN_TO_BE_REPLACED 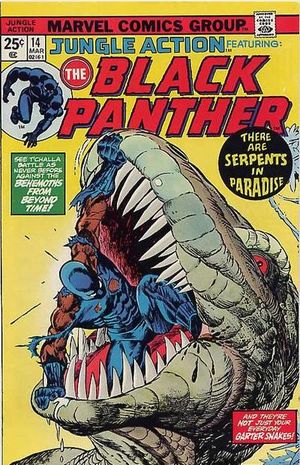 IX. THERE ARE SERPENTS LURKING IN PARADISE

Synopsis: This chapter picks up with the Black Panther surreptitiously following Sombre, the High Priest of Resurrection Altar, through the steamy jungle of Serpent Valley. The narration tells readers that T’Challa has spent the last 4 days and nights trailing Sombre in the steep, dangerous descent from the Land of the Chilling Mist.

That descent took place down the Grand Canyonesque walls of the Chasm of Chilling Mist, which terminates thousands of feet below sea level in Serpent Valley. Down this low there are no surface deposits of vibranium to absorb all the heat energy from the air like in the Land of the Chilling Mist.

That means that in Serpent Valley the “mist” is no longer “chilling” but is instead a heavy, humid natural steam bath. Serpent Valley’s mist is so thick that the sun can never be made out in the sky at all. The steamy mist simply becomes brighter with sunlight (and greater visibility) during the day and more like fog at night.

This sweltering, figurative green house was so thoroughly insulated from meteorological changes in the outer world above that countless species of dinosaurs and other creatures from Earth’s distant past still thrive in Serpent Valley.

We learned last time around that the Black Panther’s foe, Erik Killmonger/ N’Jadaka, plans to further his rebellion against T’Challa’s rule of Wakanda by rounding up dozens of Serpent Valley’s dinosaurs, training them and then using them as a mounted force in a major attack on Wakanda City. (And this was long years before either Jurassic Park OR Dino-Riders.)

Presently, T’Challa moves in to attack Sombre before he can reach Killmonger and warn him that the Black Panther still lives and was not killed by the Devil-Wolves or by the White Gorillas.  END_OF_DOCUMENT_TOKEN_TO_BE_REPLACED 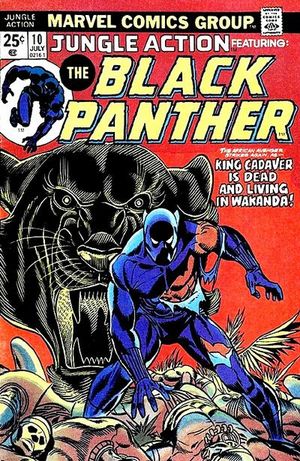 V. KING CADAVER IS DEAD AND LIVING IN WAKANDA

Synopsis: The Black Panther is sitting on one of the shores of the River of Grace and Wisdom. He is lost in thought over the way his people are calling for his Royal Consort, the popular American singer Monica Lynne, to be found guilty of Zatama’s murder and put to death. (Zatama was stabbed to death last time around by a shadowy figure but Monica’s fingerprints were found on the murder weapon.)

Presently a crocodile catches the brooding T’Challa by surprise and he must fight for his life, ultimately killing the crocodile. The Black Panther returns to the Panther Palace to visit Monica, who is terrified that she might be executed for a crime she didn’t commit.

W’kabi is among the advisors of T’Challa who is calling for Monica’s head but Taku is being a bit more level-headed. Our hero leaves the palace to attend a funeral ritual for M’Jumbak, one of the victims of Baron Macabre and his army of seeming zombies from our previous issue.

The man’s son Kantu touches a chord with T’Challa, who sees in the young man a bit of himself when he was filled with rage and bafflement after Klaw’s murder of his (T’Challa’s) father. Presently, the Black Panther heads off to the Wakanda City cemetery where he fought Killmonger’s lieutenant Baron Macabre and his possibly undead troops.    END_OF_DOCUMENT_TOKEN_TO_BE_REPLACED