TRANSGRESS WITH ME: NOVEMBER 18th

Balladeer’s Blog presents another edition of Transgress With Me. Like I always say, following the path of MOST resistance is the preferable path. I don’t advocate insincere contrarianism, I mean that there’s not much point in publicly proclaiming safe viewpoints.

For instance, I was an early proponent of gay marriage. In fact I openly supported it YEARS before the weak, inept, crooked and hate-filled Barack Obama decided it was safe enough to change from opposing gay marriage – the punk even voted for the Defense of Marriage Act (LMAO) as a Senator – to supporting it. 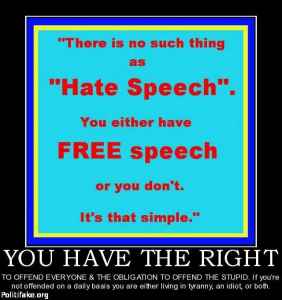 I still support gay marriage because I think marriage is anything that a society decides that marriage is, but I no longer bother spouting off that I support it because it’s no longer daring to do so. Considering the fact that people actually get in trouble for OPPOSING gay marriage now means we’ve reached the point where it’s mere virtue signaling to drone on and on about supporting it.

*** I support Donald Trump, our de facto Third Party President. At the present time this is a transgressive position to hold because the conformist forces opposing President Trump are fascistic, close-minded hatemongers who try to inflict all manner of harm on anyone who supports him.

*** I  have always despised George W Bush but that is NOT a transgressive position to hold. I could loudly proclaim my contempt for George W Bush all day long and there would be no risk involved.   END_OF_DOCUMENT_TOKEN_TO_BE_REPLACED

Tagged as Both Democrats and Republicans are Criminals, Both Liberals and Conservatives Suck, opinion, politics, populism, rebellion, Transgress With Me, transgression, WE NEED THIRD PARTIES