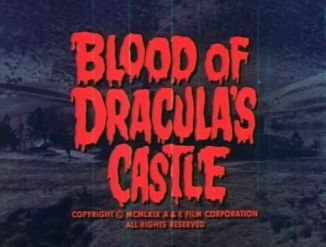 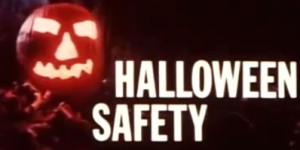 SERIAL: Before showing and mocking the movie our members of the Film Vault Corps (“The few, the proud, the sarcastic”) usually showed and mocked chapters of old Republic or Columbia serials. For this episode a break was taken from Flash Gordon Conquers the Universe. Instead the 1977 Centron Educational short Halloween Safety was shown and mocked for its seasonal relevance.

Halloween Safety was eleven minutes long and is as much fun to riff on as such old shorts generally are. The killjoy Safety Czars at Centron do their best to drain as much fun from Trick or Treating as they can, although they never approach Sid Davis levels of paranoia.

The funniest part of the short is when the little girl is browbeaten by the narrator to change from her black witch costume (poor visibility for drivers) to an all-white witch’s costume, which, with the peaked hat and flowing robe makes her look like she’s auditioning for a role in The Littlest Klansman. Though the little black kid in whiteface is a close second.

THE MOVIE: Blood of Dracula’s Castle was directed by Bad Movie icon Al Adamson and is a fun Monster Rally turkey for the Halloween time of year. The Texas 27 Film Vault also showed a few other Al Adamson anti-classics like Dracula vs Frankenstein and Vampire Men of the Lost Planet.

Count and Countess Townsend are really Count and Countess Dracula using pseudonyms. The pair are played by Alex D’Arcy and Paula Raymond, though Jayne Mansfield was originally cast as the Countess but she died before filming started.

At any rate Dracula and his Countess use various deceptions to lure naive but nubile beauties to their castle in the Arizona desert (just go with it). Once there the ladies are chained up, whipped by their hulking, Frankenstein’s Monster- style slave Mango and drained of blood by their sinister butler George (John Carradine. Yes, again!).

The blood is then served to the ritzy Count and Countess in cocktail glasses because, why not? The Dracula clan are joined by Johnny (Robert Dix), their bloodthirsty werewolf friend who has just escaped from prison. In addition Carradine’s butler character heads up a moon-worshipping cult that’s into human sacrifices.

When issues arise over the true ownership of the castle the weird menagerie try various murderous methods to keep their hideaway for themselves. Amid the usual Al Adamson histrionics, laughable special effects and a very odd song events unfold to their ridiculous – I mean horrifying – conclusion.