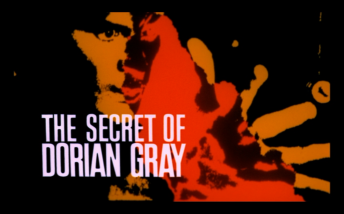 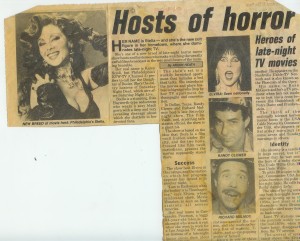 SERIAL: None this week. The movie, commercials and Film Vault Corps comedy sketches took up the entire running time.

HOST SEGMENTS/ COMEDY SKETCHES: There is some disagreement among Texas 27 Film Vault Fans. One faction argues that this was the episode in which Randy Clower – interested in preserving his youth like the main character in the night’s movie – took the nonexistent chemical Multiquixiphiline (see my exclusive interview with Randy Clower).

That chemical made him much younger, overdoing it to the point of restoring him to childhood. Randy’s real-life son Jaron played the young version of himself in the series of sketches. Once again Tex (Ken Miller) saved the day and Randy was restored to his normal age. Randy himself did not remember if this really was the movie with that storyline in the Host Segments. 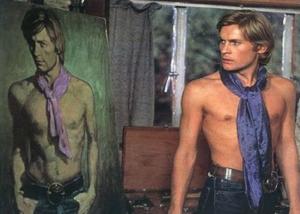 Dorian and his suspiciously Warhol-esque portrait

THE MOVIE: THE SECRET OF DORIAN GRAY (1970) – A terrific idea was blown in this hilariously flawed attempt to adapt Oscar Wilde’s Picture of Dorian Gray to swinging 60’s London. Helmut Berger, who was sort of a Nordic Michael York back when this movie was made stars as our title hero whose portrait begins to reflect all the physical and spiritual wear and tear of Dorian’s hedonistic lifestyle, thus preserving his young, beautiful physical form.

It also prevents Dorian’s body from aging, which has always made me think this adaptation might have worked better as a musical comedy in the 1980’s with Dorian a Mick Jagger-type rocker starting out in the 60’s but retaining his appeal two decades later. The contrast between the 60’s and 80’s cultural mindset would have provided plenty of comic and not-so-comic material.

Every girl’s crazy about a sharp-dressed man! Dorian shows off some of his “chick magnet” wardrobe

But that’s nothing but “what might have been” I’m afraid. The movie we’re stuck with tries to be serious but plays like Jesus Franco is directing an unfocused hybrid of Austin Powers (but without the charm), Absolutely Fabulous (but without the laughs) and the Emmanuelle movies (but with very clumsy attempts at eroticism). A nice 60’s touch is the way in which the portrait painter, played by Richard Todd, is an Andy Warhol pastiche and his rendition of Dorian looks like Warhol’s paintings of celebrities of the time period.

Given the time period in which it was made this movie has more freedom to deal with bisexuality than the 1940’s version so if you’ve ever wanted to see Herbert Lom sneak up on a showering Helmut Berger in the proverbial “don’t bend down to pick up the soap” situation this is the movie of your dreams!