NO SURVIVORS PLEASE (1964) – This obscure black & white wonder from West Germany is one of the most memorably weird movies of its time. It’s not easy to describe what makes it so appealing. The fundamental story – aliens plan to wipe out all life on Earth – has been done too many times to count. Not even their method is all that unique – the ET’s project their consciousness into the bodies of freshly-dead human beings – which has been done in other movies. 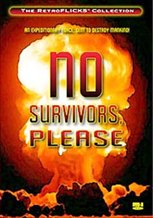 No Survivors Please is certainly not cheap, either. The action takes place in various international locations, the actors were all reasonably big in Europe at the time and the production values are impressive. There are no laughable spaceships, no goofy-looking aliens and no lame monsters on the loose.

There’s just something about this film, though. While not colossally bad it still keeps you laughing the entire running time. A large part of the reason is the fact that the people who get possessed by the aliens often behave LESS weirdly than the supposedly “normal” people do.

We join the story with the aliens’ plot already pretty far along. They’ve been engineering the deaths of assorted scientists, politicians and military figures from around the world and then possessing their bodies. From there they manipulated global events to the degree that they are on the verge of secretly provoking a nuclear war that will annihilate all life on Earth. END_OF_DOCUMENT_TOKEN_TO_BE_REPLACED