INCIDENT AT PHANTOM HILL (1966) – With the massive Frontierado Holiday just a few months away let’s start getting in the mood with a review of this 1966 western directed by Earl Bellamy.

In the closing days of the U.S. Civil War the Union Army was transporting a million dollars in gold through northern Texas only to have it stolen from them by Confederate forces at Phantom Hill. The gold was not recovered.

Barely two months after the end of the war a former Confederate named Joe Barlow claims to have been part of the southern unit which hijacked the gold shipment AND claims to know where it is buried. In exchange for a pardon for his many pre-war crimes Barlow agrees to lead a U.S. Army detachment to the fortune in gold. 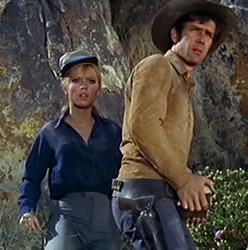 A major complication: The desert region where the bullion is buried is located in the Staked Plains, which were recently ceded to the Comanche Indians in the latest treaty. If uniformed troops are spotted poking around in the area a fresh Comanche war could break out.

An undercover Army detachment is sent in plain-clothes to recover the gold with the shifty Barlow as their guide. And so the stage is set for this underrated second-tier western that I like to call Beau West due to its entertaining blend of French Foreign Legion desert epic appeal with traditional western grittiness.  END_OF_DOCUMENT_TOKEN_TO_BE_REPLACED