BARACK OBAMA – COMMANDER IN FAILURE: AN AFRICAN-AMERICAN LOOKS AT HOW OBAMA FAILED

With so many other outlets covering the landslide of new evidence emerging against Barack Obama and his administration’s criminal behavior & other scandals, and with Mexico demanding answers about Obama’s Fast and Furious debacle, Independent Voter site Balladeer’s Blog has decided to instead focus on this underrated book. 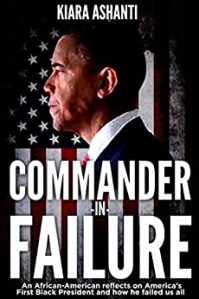 Martin Luther King Person of Courage Kiara Ashanti (above right) authored COMMANDER-IN-FAILURE: AN AFRICAN-AMERICAN REFLECTS ON AMERICA’S FIRST BLACK PRESIDENT AND HOW HE FAILED US ALL. It’s a riveting read.

No presidential administration has ever been “scandal-free” and only fools or fanatics try to claim otherwise. Such talk belongs in fiction, not serious, adult conversations.