MOONBASE 3 (1973) – This BBC attempt at realistic, “no aliens or monsters” science fiction is a mixed bag, but I think it deserves a much bigger audience. Among the elements in the show’s favor is the fact that only 6 fifty-minute episodes were made, so it makes viewers a little more willing to forgive the program’s faults.

Moonbase 3 is a sci-fi drama about the multinational European crew of the title lunar outpost. Other Moonbases are run by the United States, the Soviet Union, China and, oddly for the time, Brazil. The scientists, astronauts and administrative staff of the European Moonbase are fly-budgeted Davids up against superpower Goliaths.

Created by Barry Letts and Terrance Dicks of Doctor Who fame, Moonbase 3 is sort of like Doomwatch crossed with The Sandbaggers. However, Moonbase 3 keeps its science even closer to reality than Doomwatch did, so it can be a bit dry. Well, okay, VERY dry, but that’s a nice antidote to non-stop explosions, ray-guns blasting and other Space Opera cliches.

As for the show’s similarities to The Sandbaggers, there is bureaucratic in-fighting aplenty, unexpected deaths and an emphasis on dialogue over action. And, like both of those other programs, Moonbase 3‘s characters have to deal with perpetually tight budgets limiting the success of their missions. END_OF_DOCUMENT_TOKEN_TO_BE_REPLACED

THE PRISONER (1967): MORE RELEVANT THAN EVER BEFORE

Regular readers of Balladeer’s Blog are very familiar with my high regard for Patrick McGoohan’s 1967 science-fiction/ existential drama The Prisoner. Over the many times I’ve referred to this 17-episode program I’ve heard back from a few readers here and there saying they have heard of the show but never saw any episodes and don’t understand its appeal.

I’ve decided to do an in-depth look at The Prisoner, episode by episode, for the benefit of readers who’ve never seen the show and in the hope of reigniting interest among Prisoner fans who mistakenly feel the program’s relevance ended with the Cold War. Actually, The Prisoner is more relevant than ever, in my view, what with its brilliant blend of Orwell and Kafka plus its foreshadowing of shows like Twin Peaks and Lost.

The premise of The Prisoner reflects Patrick McGoohan’s disillusionment and disgust with the way pop fiction romanticized Intelligence Agents, who are actually just government thugs, not heroes. From interviews McGoohan did over the years he seemed to feel a certain sense of personal guilt over his own contribution to that romanticized image, especially from his successful run as Intelligence Operative John Drake on Danger Man and Secret Agent. (His acclaim from those programs was such that Patrick was supposedly approached to play James Bond in Dr No. He declined.)

LET’S GET THIS OUT OF THE WAY: Many Prisoner fans still engage in a fairly pointless argument over whether or not Patrick McGoohan’s never-named character on The Prisoner is supposed to be John Drake from his earlier series. IT. DOES. NOT. MATTER.  (And in one oft-cited episode another character rather clearly says “break” not “Drake,” but there’s no convincing the pro-Drake crowd.) 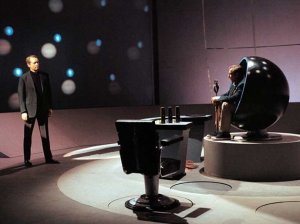 Either way, John Drake or not John Drake, the point is that McGoohan portrays a Secret Agent who resigns from the Intelligence Services in disgust. Soon after, he is gassed into unconsciousness and abducted.

He comes to in an isolated, high-tech but dystopian community known only as The Village (or “The Island” if you’re a fan of The Simpsons episode that parodied The Prisoner.)  END_OF_DOCUMENT_TOKEN_TO_BE_REPLACED

THE SOLARNAUTS (1967) – It’s kind of a shame that this pilot for a science fiction series didn’t get picked up. The Solarnauts combined some of the best (and worst) elements of Star Trek and Doctor Who plus Gerry and Sylvia Anderson’s countless “Supermarionation” programs like Thunderbirds, Supercar, Captain Scarlet and the Mysterons, etc.

COUNTERSTRIKE is a tragically forgotten British sci fi  television series from 1969. Jon Finch (left) portrayed Simon King, an alien agent who worked for the Intergalactic Council. This council had sent him to Earth to protect it from a group of renegade aliens  from a dying planet who wanted to conquer the Earth and make it their new home.

Not the most original of premises, but that inimitable British panache breathed life into the series, which END_OF_DOCUMENT_TOKEN_TO_BE_REPLACED