ALL THAT GLITTERS (1977): FORGOTTEN TELEVISION

ALL THAT GLITTERS (1977) – With the syndicated late-night soap opera satire Mary Hartman, Mary Hartman becoming a cultural phenomenon in the 1970s, Norman Lear launched this oddball, self-consciously “adult” program which added a touch of parallel world sci-fi stories to the soapiness.

All That Glitters was a comedy set in a world where women were in charge and men filled workplace and societal roles filled by women in our world at the time. The humor in this show is painfully dated but the inversion of roles still gives it a certain strange watchability. 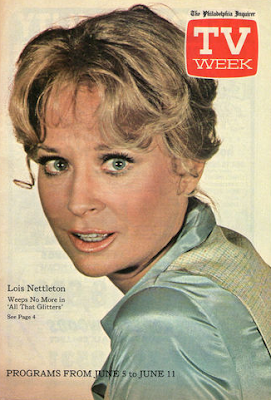 Anita Gillette, Vanessa Brown, Eileen Brennan and Louise Shaffer were along for the ride as assorted supporting characters and WKRP‘s Gary Sandy handled the role of Dan Kincaid, the secretary with “the cutest little buns in the corporation.”

The matriarchal theme was global in this show’s universe, even in the Muslim world, as we saw via female oil sheikh Madame Abu Bahn (Andrea Martin, I believe).

Stephanie Stills and Viva Knight were among the producers of All That Glitters.

This program’s premise might have made for a good telefilm or two but as a continuing series its one-punchline humor was really straining. On the plus side it had a weird theme song which adds to its geeky appeal. (“From the rib of the Madam/ Came Adam” – and, needless to say, God was referred to as “She.”)

All That Glitters is an interesting curiosity item but lasted only from April 18th of 1977 to July 15th of that same year. The program’s most enduring cultural legacy may well be the way that some of the show’s scarce fans seem to have thought they just imagined the series existed, Mandela Effect-style.

12 responses to “ALL THAT GLITTERS (1977): FORGOTTEN TELEVISION”