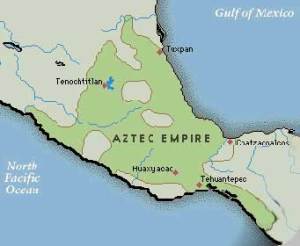 TEZCATLIPOCA – The god of sorcery and human sacrifice as well as the patron deity of thieves and other evildoers. Tezcatlipoca was originally also a war god but his martial attributes were later taken over by Huitzilopochtli. Many myths about Tezcatlipoca involve his conflicts with the wind and culture god Quetzelcoatl, conflicts that even caused the destruction of two of the previous worlds.

The First World was peopled by giants and was ruled over by Tezcatlipoca. After centuries of intermittent warfare between the two deities Quetzalcoatl at last succeeded in overthrowing Tezcatlipoca, who chose to destroy the world rather than cede it to his archrival. He did this by creating countless giant jaguars who devoured all of the giants and other life forms and then devouring each other.

The Second World was populated by monkey-type humanoids and was ruled over by Quetzalcoatl. Eventually, Tezcatlipoca overthrew the Big Q, who likewise preferred to destroy the world rather than see it ruled by the Big T. He destroyed that world with a massive global windstorm of unprecedented proportions. END_OF_DOCUMENT_TOKEN_TO_BE_REPLACED 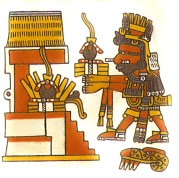 XIUHTECUHTLI – The god of fire who was also considered the god of time, which puts you in mind of the expression “time is the fire in which we are burning”. In addition Xiuhtecuhtli was also the patron deity of the nobility. END_OF_DOCUMENT_TOKEN_TO_BE_REPLACED

CHALCHIHUITLICUE – The Aztec goddess of lakes, streams, rivers and the ocean. She was also the patron goddess of birth, with the newly-born being soon after immersed in her waters to “cleanse” them. The diseased would often pray to Chalchihuitlicue for a cure before bathing in a body of water asking the goddess to wash away their illness. She was also considered the goddess of whirlpools, which the tectonics under Mesoamerica made fairly frequent back then. At Lake Texcoco in Pantitlan there was END_OF_DOCUMENT_TOKEN_TO_BE_REPLACED