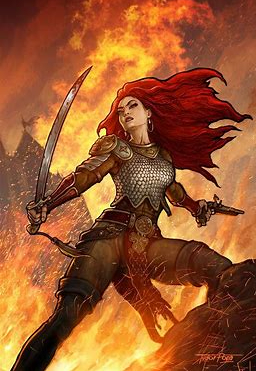 THE SHADOW OF THE VULTURE – This story by Robert E. Howard, the ONLY Howard story to actually feature Red Sonya, was first published in the January 1934 issue of Magic Carpet Magazine. As I’ve mentioned in many other reviews of old pulp characters, Howard’s REAL Red Sonya was indeed a warrior woman, but not one from his fictional Hyborian Age.

It was Marvel Comics who distorted Red Sonya into “Red Sonja” and placed her as a guest star in assorted Conan stories as well as her own series. That Red Sonja has more in common with female author C.L. Moore’s warrior woman Jirel of Joiry than she does with Robert E. Howard’s Red Sonya. 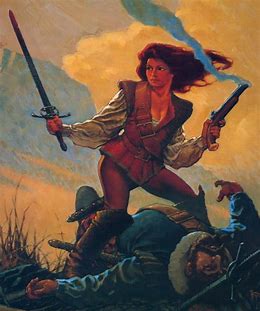 The Shadow of the Vulture is one of Howard’s historical adventures and it’s set during the 1520s, largely at the Siege of Vienna from September 27th to October 15th in 1529. Red Sonya of Rogatino is a Polish-Ukrainian woman who is more skilled than most men with swords and guns.

The storied red-haired woman has a personal grudge against Muslim Ottoman Sultan Suleiman the Magnificent, who was besieging Vienna with over 100,000 soldiers against Vienna’s 21,000. Red Sonya was glad to serve against Suleiman’s armies whenever she could.

Howard made his character Red Sonya the (fictional) sister of the real-life woman Roxelana, Suleiman’s favorite harem girl in the 1520s. Roxelana would become Suleiman’s chief consort and, in 1533, his legal wife. Roxelana aka Hurrem Sultan was a prominent figure in the Ottoman Empire.

In The Shadow of the Vulture, R.E. Howard made Red Sonya of Rogatino’s vendetta against Suleiman based on his use of her sister as a harem girl. (Sonya could not know the significant future awaiting Roxelana.) 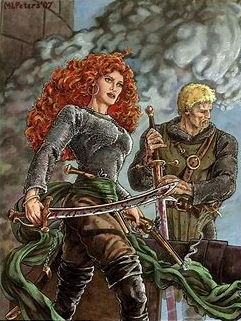 During the Siege of Vienna, Howard’s story depicts Red Sonya fighting alongside the male soldiers. She meets and develops a bickering but friendly rivalry of sorts with Gottfried Von Kalmbach, a knight who seriously wounded Suleiman at the Battle of Mohacs in 1526.

Ever since then, Suleiman has had Mikhal Oglu and his troops trying to track down Von Kalmbach to kill him and take his head back to the Sultan. Sonya and Gottfried’s shared antipathy toward Suleiman forms a loose bond between them and she winds up saving Von Kalmbach from death multiple times. 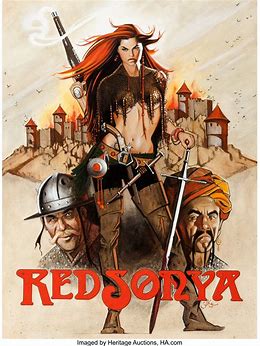 When Vienna prevails over the Muslim siege and Suleiman’s army withdraws, traitorous Austrian spies for the Ottoman Empire drug Gottfried and plan to turn him over to Mikhal Oglu and his forces. Red Sonya saves Von Kalmbach from that fate.

Next, Sonya turns the tables on Oglu, making him think he can ambush her and Gottfried and thus get his chance to take Von Kalmbach’s head back to Suleiman. In reality, our ruthless heroine leads Mikhal Oglu and his men into a trap that results in their slaughter.

It is Oglu’s head that is sent to the Sultan in Istanbul instead of Von Kalmbach’s. Red Sonya and Gottfried included a mocking note for Suleiman.