An alert reader reminded me that I did not remember to put up a blog post with links to all my reviews of female author C.L. Moore’s six Jirel of Joiry pulp stories from the 1930s. Here is that collection of links in one convenient blog post.

BLACK GOD’S KISS (1934) – The first story featuring Jirel of Joiry, a sword-wielding woman warrior from late Medieval France. From Castle Joiry she leads her army in frequent raids on rival domains while often battling mind-boggling supernatural menaces. Jirel really was the kind of red-haired action heroine that people think of Red Sonja as being, but Robert E Howard’s character Red Sonya (not Sonja) was from the 1520s, not the Hyborean Age, and used guns as well as swords.

BLACK GOD’S SHADOW (1934) – In this tale sleepless nights and her own tormented conscience prompt Jirel of Joiry to once again venture into the Black God’s unholy realm. Again she faces chilling monstrosities while on a quest to save one of that entity’s victims. Click HERE.

JIREL MEETS MAGIC (1935) – Jirel leads her army in conquering the troops and castle of the sorcerer Giraud. She also winds up clashing with Giraud’s mate, the sorceress Jarisme, whose powers and menagerie of creatures dwarf Giraud’s. Click HERE. 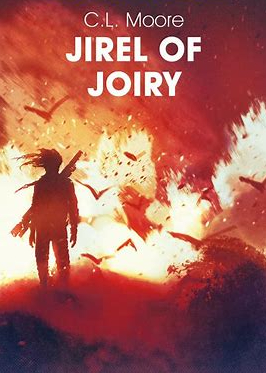 THE DARK LAND (1936) – Mortally wounded on the Battlefield of Sorrow, Jirel is abducted to the dark realm ruled by Pav. That entity has gotten the hots for our heroine while observing her in battle over the years against earthly armies and supernatural forces. Jirel is healed by Pav but then must fight him and a skull-faced sorceress to return to Earth. Click HERE.

QUEST OF THE STAR STONE (1937) – This is a crossover story in which C.L. Moore’s two most famous pulp creations – Jirel of Joiry and 26th Century space outlaw Northwest Smith share an adventure. The time-spanning warlock named Franga transports Smith back to Jirel’s time period in his quest to recover the powerful Star Stone. Click HERE.

HELLSGARDE (1939) – To save twenty of her soldiers from being tortured to death, Jirel must enter the long-damned castle of Hellsgarde. The vile deeds of its dead master and the lure of his dark treasure linger in the very air of the place. A unique breed of supernatural predators also lurk within. Click HERE.