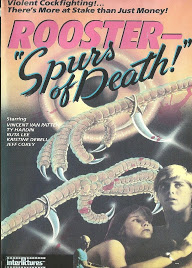 ROOSTER: SPURS OF DEATH – This cosmically bad and tasteless movie was completed in 1977 but not released until 1983, presumably because there’s never been much demand for films from the ugly subgenre of cockfighting flicks. (Cocksploitation?)

Previously, Balladeer’s Blog reviewed the horrific movie Cockfighter, in which star Warren Oates portrayed a man who trains roosters for cockfights and at one point takes a vow of silence until one of his roosters wins a fight. (Hey, it’s not exactly the Dothraki custom of cutting a man’s hair if he loses a fight, but what can you do?)

Some of my remarks regarding Cockfighter can also be applied to Rooster: Spurs of Death, a Quinn Martin Production. Okay, I’m kidding about the Quinn Martin part, but anyway, R:SOD makes you understand exactly why the cruel activity of cockfighting became so despised.

If, like me, you often endure the ugliness of Italian cannibal movies and Category 3 horror films from Hong Kong, you should be able to suffer through the wince-inducing Rooster: Spurs of Death. Same as Cockfighter, this movie often seems like a very dark-humored parody of standard sports movie cliches.

Where Rooster: Spurs of Death distinguishes itself is with the additional element of so many scenes playing like dark-humored spoofs of Tennessee Williams plays. Ruta Lee plays her “long-suffering female” role like she at least THINKS she’s in a Williams production.

The other cast members, including Vincent Van Patten, either ham it up to the point where soap opera acting seems underplayed by comparison or they take the material much more seriously than conversations about cockfighting could ever possibly be taken. Almost every scene made me laugh like I was watching SCTV’s soap opera satire The Days of the Week.

WARNING: Don’t play the “slow-motion scenes of cockfighting” drinking game when watching this or you’ll quite possibly die from alcohol poisoning.

The “spurs” part of the title comes from the sharp spurs that the roosters wear when slashing each other up for the entertainment and enrichment of sadistic yahoos. The painfully serious approach of some performers makes you want to scream at them “You’re in a damn COCKFIGHTING movie! Stop trying to act like this is Rocky!”

The most absurd of this production’s attempts to make cockfighting seem badass and dramatic comes with this line from a song on the soundtrack – “Here we come from far away, bringing with us the death on wings!” But, hell, even as silly as that sounds, Death on Wings might have made a better title for this flick than the one it got stuck with.

Rooster: Spurs of Death also features unwholesomely bizarre scenes with a midget named Chicken (Tommy Madden), including bits with him getting teased & denied by a southern-fried tart, plus one feverish segment dealing with the circumstances of the midget’s birth. All of which adds a certain David Lynch feel to the proceedings.

Rooster: Spurs of Death is listed as having been filmed in Pittsburg, Kansas but I understand from Pittsburg State Gorillas fans that it was actually lensed elsewhere. I was shocked, I tell you, SHOCKED to find such a lack of integrity from a movie about cockfighting!