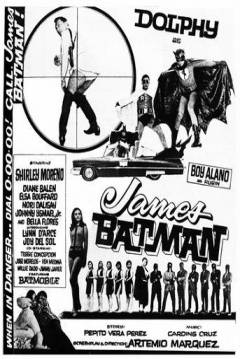 JAMES BATMAN (1966) – HAPPY THANKSGIVING! Balladeer’s Blog takes a Turkey Day look at a film from the Philippines. This movie teams up Batman, Robin and James Bond as they battle an evil organization called C.L.A.W. It’s another of the many unauthorized Batman movies from around the world. 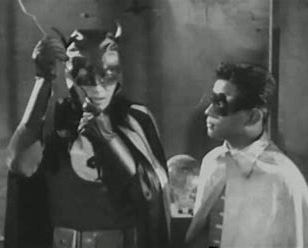 Dolpho is in love with Shirley (Shirley Moreno), but she considers Dolpho boring and has the hots for Batman. Just as Shirley is oblivious to the fact that Dolpho really IS Batman, she has no idea that her sister (Bella Flores) is secretly the sultry costumed villainess called Black Rose.

Shirley and Bella’s father is the Chairman of the Free Nations, a quasi-United Nations outfit which is given five days to surrender to C.L.A.W. – a communist organization that desires world domination.

Like some of the other unauthorized Batman movies James Batman is ostensibly a comedy (Dolphy is the Filipino King of Comedy). However, this film actually plays like the creative team was more interested in making a genuine action/ adventure movie but were forced to sprinkle lame, sub-Jerry Lewis level “comedy” throughout.

There’s an odd feel to James Batman. On one level it plays like those So Bad They’re Good Mexican wrestler movies from the 1950s and 1960s which starred the likes of El Santo, Blue Demon, Neutron, Mil Mascaras and others as they battled Mad Scientists and other menaces.

On another level it plays like the two 1940s Batman serials, especially with the lengthy yet bizarrely inconclusive fight scenes between the heroes and the minions of the villains. Those two “brothers” Batman and Robin even seem like El Santo & company crossed with the caped crusaders from serials. Their Batmobile is a dead ringer for the one from the 1960s Adam West series. 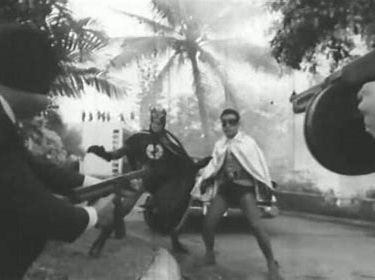 After a brief opening vignette with our faux James Bond/ Wong/ Hika the first several minutes of James Batman are pure badfilm nirvana. The actors all seem to be performing under duress as they behave completely unlike any human beings have ever behaved under any circumstances.

Soldiers of the communist organization C.L.A.W. raid a meeting of the Free Nations and deliver an ultimatum: they have five days to surrender to the villains and join them in destroying the United States or their countries will be obliterated.

To back up this threat the C.L.A.W. operatives show the assembled delegates one of those old short films depicting nuclear explosions wiping out dummy buildings in the American southwest. Even though all this proves is that C.L.A.W. has access to old A-Bomb shorts the Free Nations representatives feel they have no choice but to surrender.

Unless, of course, they can be saved before the five days are up. The Chairman (Shirley and Bella’s father) calls in Batman, Robin and James Bond/ Wong/ Hika. Batman and the master spy are reluctant to work together at first but then begrudgingly agree. 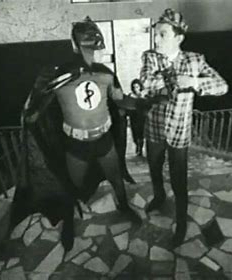 Naturally the use of the Batman mask and costume makes the scenes where both of Dolphy’s characters are on screen at the same time much easier, since Bond wears no mask.

C.L.A.W. is run by Drago, a half-decent pastiche of a James Bond villain. Among his underlings are the Penguin (yes) and the beautiful Black Rose. Drago also commands a seemingly limitless army of masked and armed thugs of both sexes.

All his underlings have been implanted with devices that let him blow up their innards remotely if he needs to stop captured lackeys from blabbing to the authorities, etc.

Scenes rarely flow smoothly into the next. Instead, we viewers are abruptly plopped into the middle of fights in progress or conversations among characters we haven’t been introduced to, etc. It’s all plugged into the pleasure centers of Bad Movie fans like me. The lame-ass attempts at comedy are groan-inducing.

Like all the best So Bad They’re Good flicks, James Batman is compellingly watchable. No matter how bad the production is there is almost always something eye-catching going on onscreen. The fight and chase scenes especially are filmed with a certain undeniable energy.

Everything comes to a head in a battle royal at C.L.A.W’s high tech headquarters, which boasts their nuclear arsenal and a huge wall-mounted hand construct the fingers of which shoot energy beams that vaporize human beings. 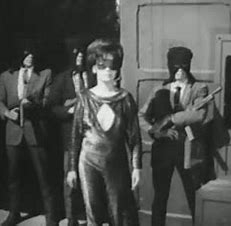 Ever wanted to see a knock-down, drag-out fight between James Bond and the Penguin? This finale’s got it! Plus Batman winds up going mano a mano with Drago and his giant, wall-mounted hand. Shirley confronts her evil sister the Black Rose, too.

The real hero of the closing minutes is “Johnny” – a spy character who shows up out of nowhere but proves crucial to the victory of the good guys. No, we viewers have no idea who he is but that’s part of the charm of movies like these.

And speaking of Bad Movie charms, there is an unexpected all-English speaking segment of about a minute or so during a hospital scene. I don’t know why it’s there but afterward we plunge right back into Tagalog dialogue with English subtitles. Go figure.

Oddly, throughout the film Robin is called Robin whether in costume or when he and his brother Batman are out in public in their civilian identities. Yet nobody catches on that he is the same Robin as Batman’s sidekick.

At any rate, I figured a Golden Turkey like this would make a nice change of pace from the usual types of Bad Movies I review.

FOR MY REVIEW OF THE GRADE Z SCI-FI FILM MYSTERIOUS PLANET CLICK HERE.