MYSTERIOUS PLANET (1982) – Written, produced and directed by Brett Piper, this was his first film ever and it manages to be bad in every conceivable way, running the gamut from fun-bad to boring-bad to incomprehensibly bad and even rising to “how could you NOT be ashamed to release this under your real name” bad at times.

Mysterious Planet is, as the opening titles say, “very freely based” on Jules Verne’s novel Mysterious Island. If you’ll recall, that book featured Civil War POWs escaping in a hot-air balloon and being taken far off course to a mysterious island. In this movie, which may be set in the far future or in deep space given the level of technology, a spaceship loaded with medical supplies is the vessel which transports our main characters.

Some reviews of this movie claim our heroes are escaped prisoners or prisoners of war but nothing in the actual film supports that. Those reviewers may just be assuming they were POWs simply because the characters in Mysterious Island were. The dialogue is so hard to understand that I can’t really blame any reviewers for jumping to conclusions while trying to make sense of this jumbled mess.

As the story opens, some kind of space fleet is informing all of its ships that no take-offs will be permitted until an “asteroid storm” passes through. Most of the captains are content to obey, but not Commander Rogan (Paula Taupier), the combined captain and science officer of the medical transport ship. (If you can make out the name of the vessel you’ve got me beaten, and I replayed most of the dialogue several times to pick out what nuggets of information I could.)

Rogan argues over the radio with her superiors and insists that the inhabitants of some planet whose name I could not make out are in desperate need of the supplies on board her ship. Our heroine is still insisting she should be allowed to take off when fate intervenes on her behalf.

A fleet of some alien race whose name I could not understand attacks the star-base and amid all the chaos, Commander Rogan takes off without permission so she can get the desperately needed medical supplies to the Whoevers. Rogan’s craft tangles with some of the raiders while simultaneously dodging asteroids from the storm/ swarm.

With no warning, a wormhole in space opens up, with Rogan’s ship, four raider vessels and the asteroid storm disappearing into it. Following this fluke the craft bearing our main characters crash-lands at sea on a ringed planet whose atmosphere and gravity are conveniently conducive to their survival. Somehow they all make it to shore (but we aren’t shown how) where they contemplate their situation.

Let me introduce our characters and what I THINK their names are, based on the often indecipherable dialogue: 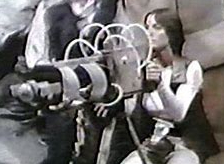 COMMANDER ROGAN – Played by the aforementioned Paula Taupier, she’s a gutsy, resourceful leader and a dedicated humanitarian who is also a science whiz. She does her best to keep her crew members alive and motivated during this crisis.

Both Taupier and her character Rogan deserve to be in a much better movie. If only you could understand more of her dialogue she’d really be something. I’m only partly joking. This was 1982 but Commander Rogan is a more fully-realized character than many of the self-consciously “strong” women in current films.

SUB-COMMANDER CRANE – Possibly played by Boydd Piper (“Mysterious Nepotism”). I say possibly because we never get who played who credits and not even IMDb was any help with this. Boydd Piper is listed as the second lead behind Paula Taupier, but both Sub-Commander Crane and one of the other male characters are very prominent, so I could be wrong about which one is played by Piper.

At any rate, Crane is “a Class 7 Telepath” and so all of his dialogue is done in voice-overs that apparently all the other characters can hear inside their minds. His lips never move while we hear his lines, causing some reviewers to jump to the conclusion that this is ineptitude on the filmmakers part, but that’s not so.

THE MERCENARIES – Given the apparently dangerous nature of Commander Rogan’s missions, her crew includes two deadly mercenaries. Their names, as far as I could make out, are Arliss (or Oniss) and Ang. Arliss/ Oniss is a humanoid and Ang is a blue-skinned, brawny and beast-faced member of an alien race called Poltrusians. (Possibly. If you can make out his race’s name let me know.)

The humanoid is the brains of the pair and is obviously supposed to be a Han Solo type of charming rogue. He bickers with Rogan in a Han and Leia way, plus he gets into mischief like making his own moonshine liquor out of ingredients on the Mysterious Planet.

Ang is big and brutish like Chewbacca but he speaks understandable English. Ang’s race is known for their warlike nature and for the way they practically obliterate their enemies’ planets and races. After being a decorated war hero in his own people’s conflicts he went into business as a mercenary. His dialogue is at times reminiscent of the Klingons on Star Trek. Especially Worf’s comments about his race’s harsh, Spartan nature.

TELLUS MARCUS – A civilian engineer who wasn’t even supposed to be on board Rogan’s ship. He was playing cards with the mercenaries when the asteroid storm got near enough for all vessels to be forbidden to take off or unload.

Tellus therefore bitches and moans a lot about this twist of fate and argues with the other characters most of the time but never becomes a Doctor Smith type of menace. He’s more like a C3PO whiner whose endless complaints are supposed to be funny. Sort of.

SILENT WOMAN (Marilyn Mullin) – A beautiful bikini-wearing babe who has been stranded on the Mysterious Planet since infancy and therefore can’t talk. Sub-Commander Crane is able to determine this telepathically. Her parents and their crew all died in the crash or at the hands of the planet’s creatures and now-extinct skull-faced intelligent aliens.

This woman has special powers like the ability to heal with her touch and to mentally control some of the alien beasts on this world. Weaponry and other technology from her parents’ crashed ship is cannibalized by Commander Rogan. Among other things, Rogan makes weaponry to blast away at the ships of the attacking raiders from earlier when they finally catch up with our heroes.

Now I’ll cite examples of the various levels of badfilm achieved by Mysterious Planet. Some spoilers will be included.

FUN-BAD – The incredibly cheap special effects, including obviously slapped-together models for the spaceships and Equinox-level stop-motion animation for the monsters. The opening action scenes are low budget fun like from old 1960s sci-fi movies or like super-marionation productions from Gerry and Sylvia Anderson. 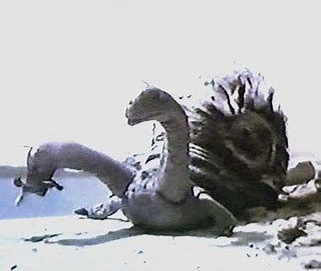 Also in this category are the periodic battles with the impossibly lame and cheap monsters on the planet. Pee Wee’s Playhouse would go on to feature more realistic creature effects. Hilariously enough, the first monster, a kaiju-sized two-headed snail-beast, is driven away by throwing a few sticks at it, despite the way it towers over our heroes. Later, a winged monster is defeated with snow balls. I’m not kidding.

Rounding out the Fun-Bad category is the way the intelligent skull-faced indigenous life-forms on the Mysterious Planet (IF that’s what they are) had used some of their technology to carve out an enormous Mount Rushmore-style skull-like face on a mountain. The face is so big that one of its empty eye sockets becomes the cavern shelter for our stranded heroes.

BORING-BAD – In the time-honored tradition of bad movies, way too much time is taken up with pointless walking around and with inane conversations that go nowhere (Even when you CAN understand them). Yet even with all that time wasted in so many scenes, this film’s runtime is a mere 70 minutes.

INCOMPREHENSIBLY BAD – A great deal of the time it’s not clear what’s going on in Mysterious Planet, nor why it’s happening. I’m enough of a Bad Movie fanatic that I was willing to watch it multiple times, so I was able to piece together what I have, but no casual viewer would want to sit through this confusing mess.

The height of incomprehensibility comes after our heroes have fought off the aforementioned raiders who went through the wormhole with them. Commander Rogan somehow (I have no idea) finds herself in contact with some superior race of aliens who monitor the Mysterious Planet. It’s sort of like the part of Mysterious Island when the castaways meet Captain Nemo if you want to force a comparison.

What is so incomprehensibly bad is the way that virtually NOTHING being said by the enormous visage of the superior alien can be understood. It’s all so much blurry gibberish. The most I could make out is that this race has godlike powers and they were observing and helping our heroes when it turned out they were more peaceful than the raider aliens. Or something. Maybe Rogan’s medical mission of mercy had something to do with it? Your guess is as good as mine.

Anyway, the alien spokesman is called a Member of the Jury, played by Vance Dallas. From that title I guess these omnipotent aliens have “judged” our heroes to be worth saving, so they warn them that the asteroid storm which entered the wormhole with them and the raiders is approaching the planet and will destroy it in 23 days. We are never told how the raiders and the asteroids wound up taking so much longer to reach the title planet than our main characters took.

Commander Rogan rallies the others to salvage some more tech, this time from the raider vessels they shot down earlier in the movie. Amid more chaos and confusion a craft capable of interplanetary flight is cobbled together but in the end only Rogan and Tellus Marcus escape the planet alive before it is destroyed. So … maybe Tellus Marcus was played by Boydd Piper? Who knows?

HOW COULD YOU NOT BE ASHAMED TO RELEASE THIS UNDER YOUR REAL NAME BAD – Worst and most amateurish of all is how bad the sound editing is for this film. How bad is it? So bad that in many scenes we can hear BOTH the sound of the characters saying their dialogue on set AND hear it being looped in later. ALL AT ONCE.

At times it’s like we are hearing the lines in stereo but at other times there is a partial delay on the part of the looped-in dialogue, making it very difficult to make out what is being said. The overall effect is like hearing the same person talking over themselves while saying the same words, just one or two syllables behind. I can honestly say that I have never before watched a movie that was bad in this particular way.

And all that’s on top of the overall blurry nature of much of the dialogue in the movie.

Brett Piper went on to do more cult films in the 1980s, like Galaxy Destroyer and Mutant War, both of them led by his post-apocalypse hero Harry Trent. He continues working to this day, with a filmography that features titles like A Nymphoid Barbarian In Dinosaur Hell, Shock-O-Rama and Triclops.

As for Mysterious Planet, it even managed a German release under the title Die Reise zum Planet des Grauens (The Journey to the Planet of Horror). I highly recommend this movie for hardcore fans of Bad Movies but not for casual viewers. +++