Synopsis: The morning after Harry Osborn was taken away by the authorities in the previous issue, Spider-Man sits, mask off, amid the wreckage of what had been his and Harry’s apartment. NOTE: The apartment was demolished by the bomb Harry set hoping to kill Peter a few issues back.

He switches to Peter Parker before Mr Templeton, the landlord, enters for an inspection of the damage. He angrily mentions all the destruction to the floors above and below Peter’s apartment as well, tears up the lease and orders Peter to vacate the premises by the next day.

The following morning, Peter gathers what few belongings he was able to salvage from the destruction and stops by the adjoining building’s rooftop to retrieve the spare Spider-Man costume, web fluid cartridges and web shooters that he tossed there days ago to prevent them being found in his apartment after the bomb went off.

To Peter’s shock, they are all gone. Alarmed, he suspects that maybe Harry found them and made off with them during his brief period as the new Green Goblin. He adds replacing those stolen items to his list of things to do.

NOTE: Our hero is not yet aware that the Jackal, who had been keeping Peter and Harry’s apartment under video surveillance, saw Peter toss out the bundle of Spider-gear on the day of the explosion and has taken the items for his ongoing vendetta against Spider-Man.

An hour later, at a pay phone, Peter has nearly exhausted all the names in his contact book but no one has room for another roommate at present. The only name left in the book is Flash Thompson, his old enemy since high school.

With nothing to lose he tries Flash anyway, only to be surprised that Flash heard about how Harry blew up their apartment and volunteers to let Peter stay with him until he finds a new place. Peter is pleasantly surprised. He hails a cab, loads his things and rides it to the Far Rockaway apartment building in which Flash Thompson lives.

As Peter exits the cab, his presence is psychically detected by the Mindworm, a new villain lurking in a nearby old, rundown house slated for demolition. The Mindworm has an ugly face but a muscular body. His mutant powers have picked up on Peter’s greater complexity compared to the other occupants of the apartment building, due to our hero’s much more adventurous life.

The Mindworm reflects on how he has been periodically feeding on the residents of the apartment building while hiding out in the run-down house. He nourishes himself from the thoughts and emotions of his victims without them realizing it. He does not read minds, he just feeds on the psychic output of other beings.

Meanwhile, Peter and Flash spend the day breaking in their new friendship and burying their past disputes over the years. When Flash falls asleep, Peter dons his Spider-Man costume and swings around his temporary new neighborhood.

Overnight he witnesses the inhabitants of the apartment building – Flash Thompson among them – filing out in various stages of undress, drawn zombielike by the nightly psychic call of the Mindworm. As the mind-controlled crowd gather outside his abandoned house lair, the villain feeds and/or gets high on their combined psychic energy.

He reflects on his origin. He was born a mutant and his psychic vampirism manifested itself in his infancy, draining psychic energy from first his mother and then his father. When they both died prematurely he was put in an orphanage, where he used his growing abilities against anyone who dared harass or bully him because of his freakish appearance.

At age 18 he left the orphanage to live on his own. Recently he’s been living in this abandoned house near the out of the way apartment building, feeding nightly on the inhabitants during the wee hours. Spider-Man clings to the side of the apartment building, watching the drama unfold, uncertain of when to act.

A police car drives by and the cops inside decide they should report the barely-clothed mob around the dilapidated house, only to fall under the Mindworm’s control themselves and shuffle zombielike to join the others. Spider-Man decides it’s time to intervene, and swings down to the crowd.

Detecting a threat in Spider-Man since he is much more resistant to his psychic powers than the others, the Mindworm orders his thralls to attack and kill our hero. They try, but naturally Spider-Man can outfight them without hurting them, mostly by webbing them up.

Next he looks for the source of the problem inside the run-down house and battles the Mindworm. Ultimately it comes down to a battle of wills between Spider-Man and the villain, who is not able to control our hero no matter how hard he tries.

Instead, the power of Peter’s emotions added to everyone else’s is intoxicating him, almost to a deadly level, so he tries to snuff out Spider-Man’s mind. Our title character swats the Mindworm on both ears, nearly knocking him out.

Ultimately, the Mindworm collapses in defeat and the enthralled apartment dwellers are freed from his control with no memory of the other nights he did this to them. Spider-Man switches back to Peter Parker and blends in with the rest of the crowd as they question each other about what’s going on. (He wants to keep Spider-Man’s presence there a secret since it would be too convenient for that superhero to just happen by shortly after Peter Parker moves in.)

The Mindworm, reduced to insanity and gibbering, is taken away by the revived police. Peter, Flash and the others go back in, presumably after giving statements of what little they know to the cops.

Villains: The Keepers of the Cobalt Flame

Synopsis: This story picks up an unknown amount of time after the previous story. Our hero is alternating between his Spider-Man and Peter Parker identities as he makes his way around New York looking for a new apartment so he can stop imposing on Flash Thompson.

Elsewhere in the city, the former Avenger Hercules is walking around, taking a break after he and Thor recently defeated the Dweller in Darkness over at Thor’s comic book.

His first tour of duty with the Avengers began in Avengers #38 (March 1967). As a team member he helped them take on the Enchantress, the Super-Adaptoid, the Executioner, the Living Laser, the Mandarin and others. Returning to Mount Olympus at the end of that run, he would rejoin the team off and on over the years. 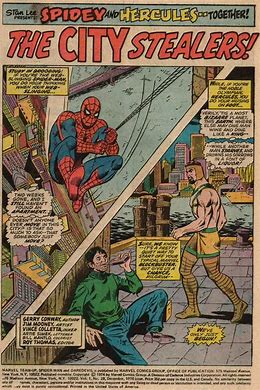 Back to the story, both Spider-Man and Hercules in their separate locales, are on-hand as earthquakes rock Manhattan. Our heroes use their powers to save innocent bystanders, then Spider-Man swings over to Empire State University, where he switches to college student Peter Parker.

Peter dodges his bio-chemistry instructor/ academic advisor Professor Miles Warren to avoid another lecture from Warren about his sparse attendance in class. Making his way to the Seismology Department, Peter blends in with other students listening to experts there discussing how such earthquakes in New York should be scientifically impossible.

That convinces Peter there’s supervillainy afoot, so he turns back into Spider-Man and swings off to investigate further. Meanwhile, Hercules is walking along Wall Street, trying to investigate the earthquakes himself. When a fresh one hits, he immediately uses his enormous, Hulk-level strength to dig under the streets to see what he can find.

Spidey is soon saved by Hercules, who wants to learn the armored men’s plan. They reveal they are literally stealing the city, shaking it from its stability so that a high-tech submarine can use advanced technology to pull Manhattan away, no matter how much damage occurs. 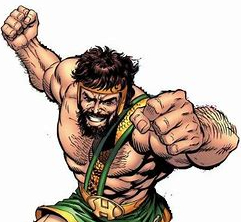 Our heroes battle the armored men again and their armor’s high-tech weaponry. Spider-Man and Hercules win, and Herc tears open the suits of armor to reveal elderly men inside. Those confused oldsters say they were mesmerized by beings called They Who Wield Power and forced to serve them in this strange undertaking, but they don’t know why.

NOTE: “They Who Wield Power” would pop up off and on in Marvel Team-Up and other comic books over the years. In 1979 the mysterious beings were revealed to be the Keepers of the Cobalt Flame, former Avengers foes who lived in an advanced subterranean civilization. They were trying to rekindle the Cobalt Flame, their supreme weapon, in order to conquer the world.

At any rate, even with the City-Stealers defeated, Manhattan is on the verge of sliding into the ocean until Hercules uses all his might to restore it to a stable position. Spider-Man and Hercules are thanked by the arriving Mayor and part as friends.

I’LL COVER THE NEXT CHAPTERS SOON. KEEP CHECKING BACK.

FOR CHAPTER LINKS TO THE 1970s BLACK PANTHER VS KILLMONGER STORY CLICK HERE.

3 responses to “SPIDER-MAN: 1970s CLASSICS 10 – MINDWORM, HERCULES AND THE CITY-STEALERS”