AN ORIGIN FOR THE FOOL KILLER – In the 1830s a Devil mated with assorted women of East Tennessee’s “Hill Portughee (Portuguese)” and one of them bore him a son. The son grew up to drive that Devil out of the Tennessee hills after tricking his infernal father into forging an iron staff that he used as a weapon against him.

That son then became the Fool Killer, using his iron staff/ walking stick/ club to prey on outsiders “foolish” enough to come looking for the hidden gold of the Melungeons in the eldritch Tennessee woodlands. He also battled federal agents trying to stop the Melungeons from printing their own gold coins.

OPPOSING THE KU KLUX KLAN – In the Spring and Summer of 1870 the Fool Killer battled the KKK, whose violence in a few North Carolina counties had grown so extreme that the governor declared Martial Law. The folk figure opposed Klan influence in North Carolina politics as well as their brutal acts of maiming and killing people who opposed them.

A FOOL KILLER CHRISTMAS – The Fool Killer spent the Christmas and New Year’s holiday of 1878 into 1879 roaming North Carolina. He struck down violent Millerite-style apocalypticists, recovered Christmas candy stolen from some Free Negro children, thwarted a serial rapist and dealt with a gang of outlaws who had served in North Carolina’s “Company Aytch” during the Civil War.

FOLLY, TEXAS – On December 31st, 1899 an old west gunslinger version of the Fool Killer wandered into a West Texas town called Folly. The wild and unruly town had proven to be a magnet for violent and depraved fools of every stripe. This Fool Killer rang in the New Year by exterminating the citizenry in a symbolic purging of every vile folly of the 19th Century.

BUFFALO, NEW YORK – In 1909 Buffalo, New York, the Fool Killer – in the guise of a street cop – patrolled the city. He confronted a murderous little boy, a fool who killed mosquitos by shooting at them with a rifle, a church deacon who collected donations at gunpoint plus assorted foolish politicians and businessmen. 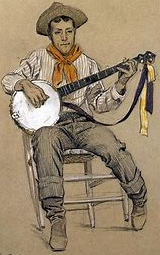 NINETEEN SEVENTEEN – This lengthy cycle of tales presented a Fool Killer who roamed the west by railroad with a banjo or guitar and armed with a gun which fired “smart” sidewinding bullets which would find and penetrate whatever fools the folk figure aimed at. The bullets were made deadlier by having been dipped in rattlesnake venom.

After the brutal winter of 1916 into 1917 this Fool Killer battled the atrocity of child labor, fought to get women the right to vote nationwide and battled a veritable army of criminal, civil and corporate wrongdoers in Oklahoma.