This letter is the first surviving letter after the fictional Fool Killer had emerged from his self-imposed hibernation in a cave since 1861, driven there by his disgust at the fools who had brought on the Civil War. Jesse Holmes (the name the Fool Killer claimed was his real identity) had emerged like a butterfly from a cocoon and was dressed in up to date men’s fashions. Wielding his usual club/walking stick/ cudgel and the set of Bowie knives that he adopted shortly before hibernating, the Fool Killer resumed his deadly attacks on corrupt politicians and societal nuisances.

These letters were really written as dark-humored commentary by Charles Napoleon Bonaparte Evans, Editor of the Milton Chronicle newspaper.

This Fool Killer Letter saw its first revived publication in November of 1978, making it the last of the surviving letters to come to light but the fourth chronologically.

The homicidal vigilante turned his attention to the corrupt Democrat political practices in Reconstruction-Era North Carolina. As always the Fool Killer preyed upon the favorite targets of the Milton Chronicle and its courageous Editor Charles Evans – the Ku Klux Klan AND the northern Carpetbaggers.

It’s very easy for us Independent voters of today to relate to the position taken by Evans and his fictional Fool Killer. We often feel caught between two irrational and destructive breeds of fanatics just as Evans and “Jesse Holmes” were caught between the Democrats of the Ku Klux Klan and the Republicans running the Carpetbagger forces.

The Klan – like their ideological fascist descendants who, ironically enough, call themselves Antifa (really KLAN-tifa) – did not take kindly to criticism or the kind of irreverent ridicule presented by the Fool Killer. In real life Evans had to endure attempted violence by the Klan but – though now technically a Democrat himself – kept criticizing both sides of the unfolding conflict just as he had as a Whig until that party died out shortly before the Civil War began.

Through the Fool Killer, Charles Evans could attack what anti-Klan North Carolinians called “Ku Klux Democracy” including whippings, maimings and hangings carried out with no legal proceedings. (See the poster)

By 1870 the Democrats of the Ku Klux Klan were committing so many acts of violence throughout North Carolina (the home state of Evans and his Fool Killer) that the Shoffner Act was passed. That act enabled the Governor to declare a county to be “in a state of insurrection” if Klan violence was of a sufficient scale.

In March of 1870 Governor William Woods Holden declared Alamance County, NC to be in such a state of insurrection and imposed martial law. (He later did the same to Caswell County) 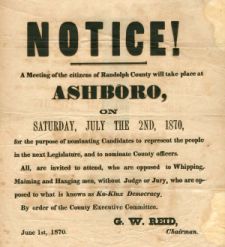 Amid this chaotic air North Carolinians began calling nominating conventions for candidates willing to aggressively address this unsettled state of affairs. On the Democrat side that involved rival factions of – on the one hand – sensible, open to compromise Democrats like Evans and his allies and – on the other – Klan fanatics who had a vested interest in continued tension, division and violence.

Since many of North Carolina’s power players on the Democrat side were secretly Klansmen, the nominating conventions were a rigged game against the sensible people like Charles Evans. Uncompromising Klan sympathizers, both open and concealed under their white robes, openly cheated to get their candidates selected through any dishonest means available.

This brings us back to the Fool Killer Letter dated May 29th, 1870. It recounts the vigilante’s death-dealing activities at one of the nominating conventions. Holmes unleashed his wrath upon crooked delegates who supposedly cast multiple votes instead of just the one they were entitled to.

Evans’ allies cried foul but with who knows how many secret Klansmen among the people overseeing the nominating conventions it was a foregone conclusion that the cheaters got their way. (For a modern parallel think of the Democrats cheating Bernie Sanders out of their presidential nomination in 2016.)

Charles Napoleon Bonaparte Evans used the convention chaos as a framing device for running this Fool Killer Letter. It turns out that rather than mail it himself as he usually did, Jesse Holmes accidentally dropped this letter on the ground on May 21st while using his club and knives on delegates casting their vote four or five or six times.

The letter was mailed to Evans by a self-confessed “repentant delegate”, relieved to be let off by the Fool Killer with just a savage beating instead of death. This delegate claimed to be so disgusted by his role in the cheating that he was through with such rigged conventions forever. He expressed contrition for casting his vote six times “instead of just the two times that would have been proper” (more wry humor on Evans’ part).

The fragmentary and partially illegible nature of this fourth Fool Killer Letter prevents me from being able to offer the usual blow by blow, death by death details that I did regarding the previous letters. We’ll be back to such details with the next surviving letter.

I can’t help but reflect once again on how hard to categorize the Fool Killer is. On the one hand he’s fighting the Klan but on the other he seems to share the post-Confederacy tendency of southerners to see a Carpetbagger under every bed.

I’m convinced this mixed bag contributed to the neglected nature of the folk figure’s Reconstruction tales. The Fool Killer, like his creator Evans, would have been regarded with suspicion and hostility by both sides. His activities as written by Evans would prevent him from being fully embraced by either Democrats or Republicans.

Even today he would be an iffy character to depict in his contemporary environment. In this comic book crazed culture I can’t help but compare the Fool Killer to Jonah Hex, hated by both sides.

The virtually post-apocalyptic setting of the Reconstruction South is tailor-made for drama but the late Confederacy was so repulsive no reasonable person could be sympathetic to it. Even with the Fool Killer’s anti-Klan actions, his (and Evans’) hostility to the occupying Northern troops makes it a no-win effort.

For more details about the conditions in North Carolina at this point in 1870 you can read up on the Kirk-Holden War and the death of Wyatt Outlaw. +++

I WILL EXAMINE THE NEXT LETTER SOON. KEEP CHECKING BACK FOR UPDATES.