How much Seventies can you handle? If dialogue like “Think I’ll take the money and just groove for awhile. Man, I can dig it!” appeals to you get ready for some “relevant” “now” and “with-it” comic books! Skywald Publishing tried to make its mark with adult black & white comic books in the 1970s. Some of their horror and sci-fi titles picked up a little momentum but when it came to superheroes, Skywald made the biggest blunder imaginable. They screwed up the copyright, making their superheroes like Hell-Rider and Butterfly public domain.

Their female horror character Lady Satan partially suffered that same fate, but changes to copyright law in 1974 made it so that only her first two issues from 1973 fell into the public domain and from the third story onward she was an owned IP. Anyway, the adventures of Hell-Rider and Butterfly (the first black female superhero) stood out with their toplessness, drug use and references to sex. Otherwise they were mediocre. Here are Skywald’s two public domain superheroes. Solid! … And all that stuff.

VICTIM: Hey, stop shooting that flamethrower in my face! WOMAN: That man is the worst nuisance on the beach!

Origin: Brick Reese (“Brick?”) rebelled against his affluent background. After graduating from Harvard Law School he drifted around the country, experimenting with sex and drugs, eventually joining the roguish but “heroic” biker gang called the Wild Bunch (Think the Howling Commandos meet the biker gang craze of the 60s and 70s).

After 6 months of this lifestyle, Brick got drafted and sent to serve in the Vietnam War. When he had just a few weeks left in his tour of duty he was seriously wounded, with his injuries being such that they threatened to paralyze him at any moment for the rest of his life. Rather than live with that forever hanging over his head, Brick volunteered to be a human guinea pig for the experimental drug Q-47. Injections of that drug every day for a month cured Reese but, unknown to anyone but him, also granted him superpowers with which he battled the forces of evil as the superhero Hell-Rider. 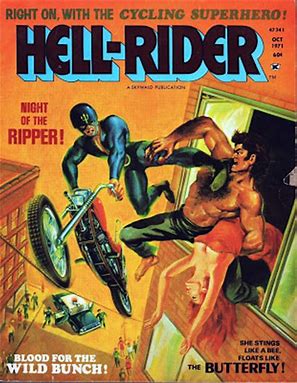 Powers: Hell-Rider possessed enough strength to comfortably lift and toss objects that weighed in excess of 1,000 pounds and could heal more quickly than normal human beings. He was very skilled at unarmed combat and was at stunt-rider level with his motorcycle. That cycle was outfitted with a flamethrower under the headlight, napalm tanks, a rocket-booster for vertical driving up the sides of buildings AND with a device for shooting out an oil slick against pursuers.

Comment: Gary Friedrich, the man behind Hell-Rider, went on to co-create Ghost Rider at Marvel Comics a few years later. He also had experience with Sgt Fury and His Howling Commandos tales. In Hell-Rider’s case Friedrich provided a quasi-scientific means for his motorcycle hero to be able to drive up the walls of buildings, while his later Ghost Rider character did it via supernatural means.

Hell-Rider sometimes had crossover adventures with his old pals in the Wild Bunch, who also had their own separate set of escapades. In his secret identity of Brick Reese, this hero worked as an attorney for entertainers in Los Angeles and Las Vegas. He also partied hard and, though okay with “mild” drugs, he studiously avoided heroin.

In his three published adventures, Hell-Rider tangled with:

*** The Claw, a claw-handed mystery man who pushed heroin to finance his fascist organization which was planning to take over the country. For some weird reason his troops wore green cat-themed costumes. When unmasked, this villain turned out to be Brick Reese’s uncle, who owned the law firm our hero worked for at the moment.

*** The Ripper, a Jekyll and Hyde type of monster who murdered and mutilated women who performed at night-clubs and who worked for a young, up-and-coming Hugh Hefner type. The Ripper was the girlie empire owner’s younger brother who had willingly used Q-47 on himself, giving his villainous persona powers enough to rival Hell-Rider’s. Just as Hell-Rider’s powers would suddenly conk out every so often for unknown reasons, the Ripper’s transformations to and from his super-powered form happened at unpredictable times. If there was a larger storyline intended for the mysteries behind Q-47, unfortunately Hell-Rider was canceled before it could be dealt with.

*** A human trafficking ring which smuggled Mexican men and women into the U.S. illegally and used them as slave labor and/or sex slaves. A fourth story pitting Hell-Rider against a cult of Zodiac-style serial killers was advertised but the series folded before it came out.

Powers: Butterfly wore a costume which included a jet-pack for high-speed flying, wings for gliding and suctioned fingertips to allow her to cling to the sides of buildings or to vehicles and aircraft. In addition she could trigger sudden bursts of light from bulbs all over her costume, temporarily blinding her adversaries. This feature helped in battles against overwhelming numbers and in quick escapes.

Comment: Given Butterfly’s status as the first black female costumed superhero, it’s amazing to me that she is still so comparatively obscure. In her secret identity of Marian Michaels, she was an up and coming singer in Las Vegas. Her attorney was Brick Reese, which made crossovers with Hell-Rider pretty easy.

In her two adventures, Butterfly took on: 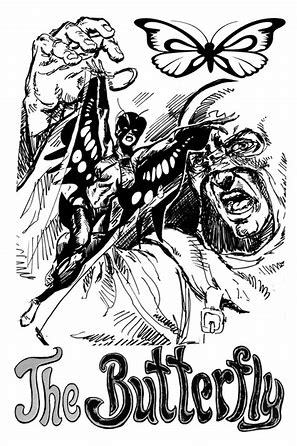 *** The Claw and his fascist organization of green-cat soldiers. (?) That was a crossover story with Hell-Rider and the Wild Bunch in the debut story for all three sets of characters.

*** A KKK-style racist hate group out to utterly exterminate all black people in the U.S. The group was called the Brothers of the Crimson Cross and wore hooded costumes. Their leader, called the Grand Master (as opposed to Grand Wizard) turned out to be a white Senator who seems modeled on real-life Democrat Senator Robert Byrd, who really did hold high rank in the Ku Klux Klan during his political career, a career which ran from the 1950s onward into the 21st Century. Joe Biden delivered the eulogy at this KKK man’s funeral. Disgusting.

In that second and final adventure, Butterfly worked with Special Agent Tony Morris, a black fed. Tony was attracted to both Marian Michaels AND Butterfly, but didn’t know they were one and the same.

On an unrelated note, how has Quentin Tarantino not done a movie adaptation of Butterfly and/or Hell-Rider? It’s got all his favorite things – the 70s, blaxploitation, drug culture, bikers and, in the Claw storyline, a fortune in heroin has been secretly stashed in singer Marian Michaels’ stage boots, which become as sought-after as the Maltese Falcon. C’mon, Quentin! This was tailor-made for you!