Superheroes still dominate pop culture right now and readers just keep demanding more and more articles about them. Here is a look at the heroes from another defunct comic book company, in this case Spark Publications. 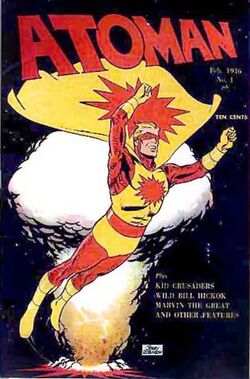 Origin: While working at the Atomic Institute, scientist Barry Dale was exposed to so much radium and uranium that he absorbed “the power of the atom.” Barry’s powers manifested themselves when agents who wanted to sell America’s nuclear secrets to the highest bidder tried to kill him over his refusal to help them. With his new superpowers he donned a costume and fought the forces of evil as Atoman.

Powers: Atoman possessed massive super-strength, could fly, run at super-speed, was invulnerable and had “atomic vision” (x-ray vision). In addition he could heat his body to such a degree that he could weld objects together with his bare hands.

Comment: This hero boasted that he could “smash mountains, wipe out whole cities” and “travel for thousands of miles in one leap.” He was also convinced he was just the first of many atomic-powered beings which the nuclear age would spawn. I guess to prove he wasn’t just another Superman imitation, Atoman claimed he would “help all people, regardless of race or creed or nationality” instead of fighting for “truth, justice, and”… you know. 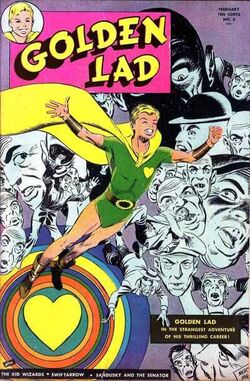 Origin: Young Tommy Preston was working in his grandfather’s neighborhood antique shop when he discovered an ancient relic called the Aztec Heart of Gold. Yes. In an antique shop. (WRITER: Hey, Editor, do items like Aztec artifacts wind up in antique shops or in museums? EDITOR: You’re joking, right?  WRITER: Yeah, uh … joking. Who wouldn’t know the answer to that, right? Ha, ha, ha!)

Anyway, the Aztec Heart of Gold holds the mystic power of “the blood of a thousand martyred Aztecs.” This relic bestowed superpowers on “pure hearted” people who were “devoted to justice.” And so Golden Lad was born!

Powers: Upon Tommy Preston reciting THE ENGLISH WORDS “Heart of Gold” this Aztec relic granted its wearer incredible super-strength, the power of flight, a degree of invulnerability and “high voltage vision.” The Heart of Gold’s magic also prevented people from clearly seeing that Tommy and Golden Lad were one and the same. (That’s not me being snarky, that’s right in the comic books.)

Comment: I would have also given the Heart of Gold that Tommy wore certain abilities similar to the Golden Age Green Lantern’s ring, like ray-blasts, etc. 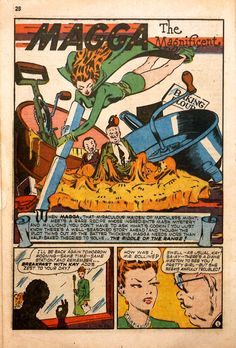 Origin: Kay had mastered Tibetan Magic and could transform into the superheroine called Magga the Magnificent after saying “om mani padme hum.” (A slight variation of the Green Lama’s more famous incantation.)

Powers: Magga the Magnificent could fly, levitate objects and possessed a large measure of super-strength.

Comment: Magga, “the miraculous maiden of matchless might” was in reality a gender-switched Green Lama from an unsold and rewritten Green Lama story. 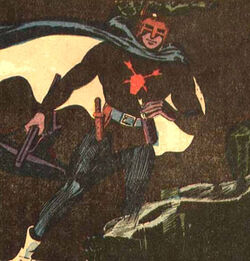 Origin: Newspaper Editor Jon Dart wanted to extend his crusade against crime while keeping his friends and loved ones from being targeted by the foes he would thus acquire. He adopted a costume and the nom de guerre Swiftarrow and took action.

Powers: Swiftarrow was at the peak of human condition and had more agility than an Olympic gymnast. He was highly skilled in unarmed combat and had uncanny skill with his crossbow and special, gimmick bolts. In addition, this hero used a knife in battle.

Comment: It’s nice to see a crossbow-wielding variation of the Arrow, Alias the Spider, Diana the Archer and all the other bow-and-arrow superheroes. Swiftarrow switched up the red and black color scheme to his costume after awhile.

Origin: Radio Station managing director Don Wickett put his anger at rampant crime to good use by donning a costume and fighting the forces of evil as the superhero called Shaman.

Powers: Shaman was at the peak of human condition and was highly skilled at unarmed combat. In addition he was more agile than an Olympic gymnast. He drove a high-tech Jetcar with futuristic features.

Comment: Shaman’s home base was in Knickerbocker City. If you need a backstory on his costumed name, let’s assume it comes from his “wizardry” with radio and vehicular technology. It’s not out of the question that he might have served as a fighter pilot or tank crewman during World War Two. 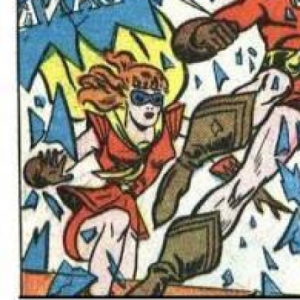 Origin: When Kandy’s boss at the radio station where she worked became the costumed superhero Shaman she donned a costume of her own and fought at his side as Flame.

Powers: Flame was in the peak of human condition and was as strong as a human female can possibly be. In addition she was highly skilled at unarmed combat and was more agile than an Olympic gymnast.

Comment: The creative team showed real lack of imagination here. She’s called Flame so give her something like a pistol that shoots fire like a flamethrower does. Or some kind of fire-related superpower. No wonder Spark Publications only lasted a few years. 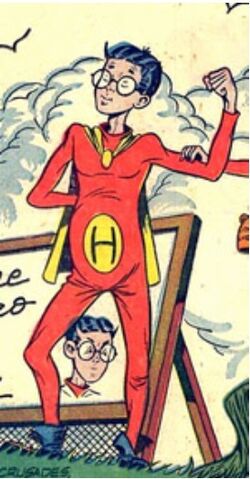 Origin: The wizard Merlin appeared to Wilbur Klotz in the present day. Declaring him “worthy” he magically granted him superpowers to fight the forces of evil.

Powers: Lieutenant Hercules possessed super-strength, indestructibility, super-speed and the power of flight. He also had the wisdom of a sage and was “master of the forest,” whatever that means. This hero could magically switch from his human to superhero forms at will.

Comment: Almost 4 decades before the Australian-created superheroine Lieutenant Smith, this figure’s creators beat the Aussies to the punch with the “lieutenant somebody instead of the overused CAPTAIN somebody” joke.

Another way that Lieutenant Hercules was a bit ahead of his time was the way he planted ads in the newspaper offering his superhero services for hire. (But he wasn’t the first to do that, Hourman was.) Merlin remained at Wilbur’s side to advise him and manage his superhero cases. 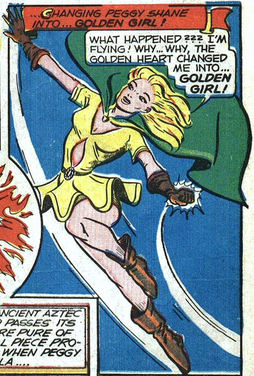 Origin: Peggy Shane, a classmate of Tommy Preston/ Golden Lad, recovered a small portion of Golden Lad’s Aztec Heart of Gold after it was slightly damaged. When she would recite the words “Heart of Gold” she turned into the superheroine called Golden Girl. (Insert your own Bea Arthur joke here.)

Powers: Since Golden Girl had only a small fragment of the Heart of Gold she possessed lesser versions of Golden Lad’s super-strength, flight and invulnerability. The Heart’s magic also prevented people from noticing that Peggy and Golden Girl were one and the same.

Comment: Golden Girl wore her piece of the Heart of Gold in a small necklace. 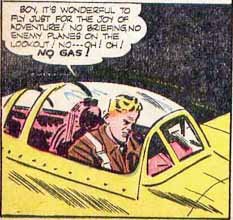 Powers: Air Rover was in the peak of human condition and excelled at unarmed combat. In addition his technological genius was impressive, as was the battle savvy he gained serving in World War Two.

Comment: Air Rover had Pulp Magazine/ Indiana Jones-style adventures, like on an uncharted island full of Amazon women and in a supernatural Lost Valley of a Thousand Demons in the Himalayas.

If you want to think of the short-lived Spark Publications setting as a “shared universe” we could assume that maybe Johnny Hopper and Don Wickett (Shaman) were war buddies, and maybe Hopper provided the secret funding and material behind Shaman and Flame’s Jetcar. 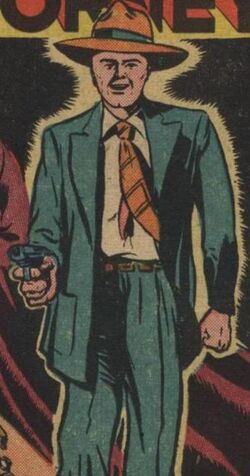 Powers: The uncanny ability to take action in his hat, suit and tie and start punching and shooting criminals without getting arrested or losing his position as a District Attorney.

Comment: The District Attorney was especially tough on crimes that victimized America’s returning Veterans. He also had the worst secret identity this side of Super President (qv).