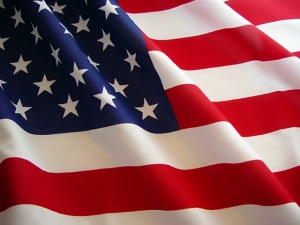 Balladeer’s Blog wishes a happy birthday to the USA! What happened in early July of 1776 certainly needs no rehashing so in keeping with my blog’s theme of addressing more out of the way subjects this post will examine various events that took place on other July 4ths throughout American history.

JULY 4TH, 1778 – George Rogers Clark led his rebel forces in taking the British stronghold of Kaskaskia, near the confluence of the Mississippi and Kaskaskia Rivers. Clark and his Rangers were on a mission for then-Virginia Governor Patrick Henry.

JULY 4TH, 1783 – The Massachusetts Supreme Court is finalizing its written decision holding that slavery has been illegal in the state since adoption of the Massachusetts Declaration of Rights in 1780.

JULY 4TH, 1788 – The Constitution of the United States is starting to come into full effect this calendar year,  instituting the government we are still officially ruled by. First elections are scheduled for later in the year.

JULY 4TH, 1789 – Back in the days before the country took pride in masochistically subordinating its own best interests in order to please all the countries that hate it, it was on this date that Congress passed a tariff that taxed goods imported in American ships at a rate 10% lower than on goods imported in ships under foreign flags.

JULY 4TH, 1794 – The “Whiskey Rebellion” is underway in western Pennsylvania. Farmers protesting a federal tax on grain alcohol act against it by refusing to pay it and by tarring and feathering the revenue agents sent to collect the tax money. They also take to burning down the homes of revenue officials. The rebellion ends in November.

JULY 4TH, 1797 – The Judiciary Committee of the House of Representatives was preparing to exercise its impeachment power for the first time. Senator William Blount of Tennessee was the target. Blount would be accused of attempting to provoke a war between the USA and Spain by using clandestine agents to incite the Cherokee Indians into staging attacks on frontier outposts of both nations. The full list of charges was submitted to the House on July 7th, and though impeached, Blount was found not guilty by the Senate on January 14th, 1799.

JULY 4TH, 1802 – The United States Military Academy opens at West Point, NY, near the fortress famed for its importance in keeping the British out of the upper Hudson River area and for Benedict Arnold’s plot to betray it to the British.

JULY 4th, 1814 – In War of 1812 action General Jacob Brown and his troops celebrate the USA’s 38th birthday in Fort Erie on the Canadian side of the Niagara River. The previous day Brown and his men had taken the crucial fort from the British in battle.

JULY 4TH, 1817 – New York’s Governor DeWitt Clinton marks the 4th by breaking ground at Rome, NY for the building of the Erie Canal.

JULY 4TH, 1820 – The capital of Alabama is moved from Huntsville to Cahawba … forever changing the course of American history.

JULY 4TH, 1826 – John Adams and Thomas Jefferson, the only U.S. Presidents to have signed the Declaration of Independence, both passed away on this date, the 50th anniversary of that document’s signing.

JULY 4TH, 1831 – The very first public singing of the song America, by Samuel Francis Smith, takes place in Boston, MA to mark the nation’s 55th birthday. Also on this date former President James Monroe tried to extend the tradition begun by Adams and Jefferson by passing away, but, oddly, no other former presidents have followed his lead on this.

JULY 4TH, 1836 – The House of Representatives marks the USA’s 60th birthday by passing a resolution recognizing the nation of Texas, a sister republic that has just fought its own war of independence from the tyrannical Mexican government.

JULY 4TH, 1848 – The cornerstone of the Washington Monument is laid at a public celebration of Independence Day in Washington, DC.

JULY 4TH, 1863 – The Confederate stronghold of Vicksburg, MS is surrendered to the Union forces led by General Ulysses S Grant. Because of this, Democrats being as strange as they are about losing the Civil War, Vicksburg would not celebrate the 4th of July again until World War 2. I’m serious.   ###   Today also saw the Union forces at Helena, AR repulse the Confederate attempt to retake the city.

JULY 4TH, 1875 – White Democrats in Vicksburg, still bitter over the way the war turned out, murder several freed black people in the town. By the 21st Century Democrats will have perfected having African Americans who are obedient to the Democratic Party machine harass free-thinking black people instead of soiling their hands with their own dirty work.

JULY 4TH, 1876 – On the nation’s Centennial, an African American painter named Edward M Bannister wins first prize for his painting Under The Oaks, presented at the celebration in Philadelphia.

JULY 4TH, 1881 – Many in the nation are praying for the survival of President James Garfield, who was shot by Charles Guiteau two days earlier. Garfield would linger until September 19th before passing away.

JULY 4TH, 1884 – In Paris, the French ceremonially present the Statue of Liberty to the United States.

JULY 4TH, 1894 – This date is deliberately chosen to announce the proclamation of the Republic of Hawaii, led by President Sanford Dole, in one of those simultaneously stirring yet repulsive moments in history.

JULY 4TH, 1902 – President Theodore Roosevelt marks the nation’s 126th birthday by literally “declaring victory” in the undeclared war with Philippine nationalists that has been raging since February of 1899.  ***   This marks the end of hostilities everywhere except in the Moro province of the southern Philippine Islands where slave-holding Muslim forces remain under arms. The undeclared war against those slave-owning forces would continue until June 15th, 1913, when Bud Dajo, the last bastion of Moro resistance fell after a frontal assault that lasted for three days. Bud Melman fell one day earlier. (I’m kidding!)

JULY 4TH, 1910 – Supreme Court Chief Justice Melville W Fuller passes away after heading the Court for the past 22 years. Future Chief Justices see through this transparent attempt to start a “let’s die on the 4th of July” custom like Adams, Jefferson and Monroe did for Presidents and refuse to follow suit.

JULY 4TH, 1917 – American troops serving in World War One France pay a ceremonial visit to the tomb of the Marquis de Lafayette.

JULY 4TH, 1918 – At Maryhill, WA a full-scale replica of Stonehenge is dedicated because when you think of the 4th of July, dammit, you think of Druids!

JULY 4TH, 1946 – In a ceremony in Manila, the Philippine Islands are granted their full independence from the United States.

JULY 4TH, 1976 – The nation celebrates its 200th birthday as everyone collectively catches their breath after the Vietnam War and the Watergate Scandal.

JULY 4TH, 1997 – The United States Pathfinder Probe landed on Mars. Al Sharpton expressed outrage that there were no African Americans living on the Red Planet and blamed it on White Privilege.

JULY 4TH, 2012 – Denmark celebrates the 100th Rebildfesten in Rebild Park. The park was donated by Americans of Danish descent (a family which includes the Patron Saint of Bad Movies John Carradine) in 1911 and in 1912 saw the first Rebildfesten. This celebration is the largest 4th of July event outside the United States.

FOR QUICK FACTS ON ALL THE SIGNERS OF THE DECLARATION OF INDEPENDENCE CLICK HERE:   https://glitternight.com/2012/07/03/sacred-honor-quick-facts-about-the-signers-of-the-declaration-of-independence/