If it’s the Friday after Thanksgiving then that means it’s the start of this year’s Christmas Carol-A-Thon! This is the TENTH Annual edition. Between now and Christmas Day Balladeer’s Blog will examine multiple versions of A Christmas Carol, both new reviews AND old favorites mixed in. 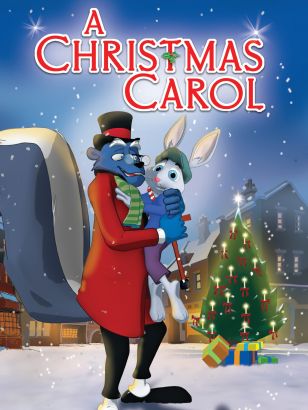 A CHRISTMAS CAROL (2006) – This computer-animation version of the Dickens classic was produced by BKN and distributed by Genius Entertainment, Kidtoon Films and Image Entertainment. Ric Machin directed. The 48 minute film had a brief theatrical run in November of 2006 before being released on home video.

If you’re in the mood for a shallow, “just going through the motions” rendition of A Christmas Carol then THIS is the version for you! The target audience seems to have been very, very young children so all strong emotional content has been removed, leaving the shell of the actual story.

The computer animation, though dated by 2019 standards, was very good for 2006 and probably delighted children. Anthropomorphic animals play the characters, with skunks as Ebenezer Scrooge and his nephew Fred, rabbits as Bob Cratchit and his family, an anteater as Jacob Marley and so on.

Taking the story beat by beat:

OPENING AT SCROOGE AND MARLEY’S – Mrs Cratchit and Tiny Tim, bum leg and all, are outside in the streets waiting to walk Bob Cratchit home when his workday is over. Inside the office, Ebenezer Scrooge is trying to blame the timid Bob Cratchit for the loss of a shilling from his fortune.

VISIT FROM NEPHEW FRED – Fred arrives and saves Bob from disciplinary action by finding the missing shilling. He then proceeds to invite his uncle Ebenezer to Christmas Dinner the next day. Scrooge refuses, of course.

This is one of those annoying Carol adaptations whose creators think they can “improve” on what Charles Dickens wrote. NONE of the familiar exchanges of dialogue are featured, not even one just to throw us a bone.

ENCOUNTER WITH THE CHARITY COLLECTORS – This encounter takes place on the streets of London instead of at Scrooge’s counting-house. We viewers also get treated to some more oh-so-zany changes to the dialogue. Surely not even 2 year olds were entertained by these exchanges.

VISIT FROM MARLEY’S GHOST – If you were expecting the scene where Scrooge sees Jacob Marleys’ face on his door-knocker, then consider those expectations subverted, long before Rian “Man-Baby” Johnson came along. And for just plain no reason, Marley has been dead for only 2 years instead of 7.

An actual clever touch is the way the ghost emerges from Scrooge’s fireplace, nicely invoking the way Marley’s insubstantial hair seems stirred “as if by fire.” (Presumably the person responsible for that nod to the source material was fired when they were found out. I’m kidding.)

GHOST OF CHRISTMAS PAST – A female stork portrays this Christmas Ghost. It’s possible that this is to imply that a stork delivered baby Jesus but I’m so starved for actual Christmassy touches in this flick I’m probably reading too much into it. And even though “Long past?” followed by “No, YOUR past.” takes up mere seconds we don’t even get to hear THAT.

Regular readers of Balladeer’s Blog know that I don’t like Carols which show us Scrooge’s father instead of leaving him to the audience’s imagination. This already-annoying rendition does THIS, too. Even worse, the filmmakers screw up the scene where Ebenezer’s sister Fan comes to his boarding school to take him home for a rare Merry Christmas. In this version Fan visits him at school just to tell him he CAN’T come home because with her son Fred having been born there’s not enough room.

On the plus side, Scrooge’s lost love Belle is left out, so we don’t have to suffer through what BKN would have done to this frequently mishandled character. On the minus side, we don’t get to see Fezziwig either.

GHOST OF CHRISTMAS PRESENT – Another good touch here. This ghost is depicted as a kangaroo, so he speaks with an Australian accent. He’s not surrounded by plenty, however, nor does he show Scrooge Ignorance and Want or refer to “a vacant seat in the poor chimney corner.” Tiny Tim doesn’t even say “God bless us, everyone!” but that should go without saying at this point.

GHOST OF CHRISTMAS YET TO COME – This ghost is called the Ghost of Christmas Future in this version, but many Carols make that change so no harm done. A walrus with one broken tusk portrays this spirit, who speaks instead of being a silent wraith like in the book but that change at least makes sense in a film aimed at children who will need explanations for what is happening.

Tiny Tim does not die in this future, but instead becomes as bitter and mean-spirited as Scrooge himself, which anguishes Ebenezer even more. It’s a bold and oddly touching change, unlike the pointless changes which riddle the movie, so that’s enjoyable. It also reflects what should be a rule of thumb in such productions: If you’re going to change something have a reason for doing it!

SCROOGE’S CONVERSION – This home stretch is astonishingly faithful to the novel. We get the boy who tells Scrooge what day it is, we get the second encounter with the charity collectors, Scrooge having a meal sent to the Cratchits, plus his arrival for Christmas Dinner at his nephew Fred’s. Even Scrooge’s trick on Bob Cratchit the day after Christmas is intact, but with none of the actual dialogue. Marley’s Ghost is freed from his damnation, though, in a touch which misses the actual point by a mile.

A Christmas Carol: Scrooge’s Ghostly Tale (the alternate release title of this work) would best serve as video wallpaper for the adults while young children can safely watch it on their own. There’s nothing truly upsetting for them and the genuinely brilliant, top-notch renditions of the animated animals will probably keep them riveted.

FOR MORE VERSIONS OF A CHRISTMAS CAROL CLICK HERE:   https://glitternight.com/category/a-christmas-carol-2/

8 responses to “A CHRISTMAS CAROL (2006): COMPUTER ANIMATED BY BKN”