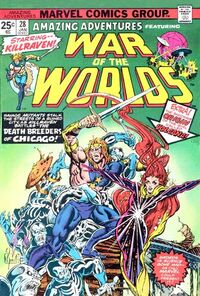 Title: The Death Merchant of Chicago

Synopsis: This issue starts off with a splash page featuring narration which nicely captures the charisma and warrior majesty of Killraven, leader of a group of Freemen rebelling against Earth’s alien conquerors (Martians in the original War of the Worlds comic book but Zetans in my revisions).

We get a reference to his years as a gladiator in the arena circuit set up in a bread and circuses manner by the Martians/ Zetans and the ruling class of human quislings who help them subjugate humanity. We also get a reminder that he is the focal point of the ongoing war, a reference to Killraven’s possession of The Power (a pre-Star Wars variation of The Force) which he is still struggling to master.

The story picks up in early April of 2019 (lol) but you can just picture it as 44 years in the future, as it would have been to readers in 1975. The Freemen and their new member Volcana Ash have traveled from last issue’s Milwaukee battleground with the Death Breeders to the ruins of Meig’s Airfield outside Chicago.

Killraven and his Freemen have been using the place as an observation post to prepare for their assault on the futuristic, skyscraper-tall alien fortress called Death-Birth. Last time around we learned that it is a Martian/ Zetan stronghold built by human slave labor as a combined military post and breeding station for human beings, since the aliens feed on humans like cattle.

Presumably Killraven’s previously-established ability to cloak himself and his Freemen from alien detection scanners via The Power has prevented the extraterrestrials and their quisling soldiers the Death Breeders from realizing they are there.

It is still very cold outside Chicago and M’Shulla, the African-American member of the Freemen, is ice-fishing through a hole in the frozen surface of Lake Michigan. He asks Killraven why he is still reluctant to trust Carmilla Frost, the scientist of the group and M’Shulla’s romantic partner.

M’Shulla presses the issue, since Carmilla is even guiding the Freemen toward Yellowstone National Park (“the place of Yellow Stones” as K.R. and company call it), where the High Overlord told Killraven his older brother Joshua is being held. Killraven points out that it is because Carmilla worked for years as a human quisling for the aliens PLUS she still refuses to tell them the truth about her creation Grok (Deathlok in my revisions).

The former Jonathan Raven also dismisses M’Shulla’s accusations that the flirty Volcana Ash lures him on like a Siren of Seventh Avenue (from Part Two). Killraven reminds M’Shulla, his closest friend on the team, that he wants to destroy Death-Birth and free the human captives, and Volcana DID find them this observation post.

Old Skull, the big, bald, brawny but mentally challenged member of the Freemen, is having trouble lighting a fire to cook the fish M’Shulla has caught. Volcana shoots flames from her hand, starting the fire for him, then once again vamps Killraven by saying “Let me light your fire, red. And anything ELSE you’ve got in mind.”

M’Shulla wryly notes “Yeah, HER you trust, right K.R.” and returns to his fishing only to be attacked by a walrus-sized salmon bursting up through the ice. The fish has been mutated by pollution and residue of the biological warfare agents unleashed during the war against the aliens 18 years earlier.

The mutated creature chomps down on M’Shulla’s arm while Killraven attacks it with an ionic knife. This is the first mention we’ve gotten of this weapon, which not only penetrates the fish’s scales and flesh but whose ionic energy causes ruptures throughout the creature’s internal organs.

Volcana shoots flames from both hands this time, helping to destroy the fish-creature. M’Shulla gets his arm-wound tended to by Carmilla, who again shares with him her worries that the injured Deathlok may be dying. She says only his eyes remind her of the man he was before the aliens forced her to experiment on him, turning him into what he is now. 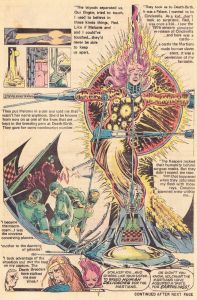 Killraven now insists that Volcana Ash reveal her origin and she does so. Years ago she and her sister Melonie were captured by the Death Breeders. Melonie was taken off to become one of the “Eves” (the breeding stock in Death-Birth are all called Eves – for the women – and Adams – for the men).

Volcana (she does not reveal her real first name) was taken to be a human guinea pig for genetic experiments by the scientists helping Earth’s alien conquerors. Just as the Freemen’s former ally Mint Julep was a plant/ human hybrid so Volcana turned into this mutate capable of generating and shooting fire from her hands. Her skin turned reddish-pink and her hair fiery red.

Ms Ash wasted no time using her newfound powers on her captors and escaped. She had been fleeing the Death Breeders ever since, until she joined up with the Freemen in Milwaukee last time around.

Meanwhile, we rejoin Adam 3031 and Eve 3031 inside the breeding pens of Death-Birth. They know her child is close to being delivered but that it will be delivered purely as a delicacy for the alien overlords of Death-Birth. As Atalon, the hideous, fastidious, white-clad human quisling who oversees the breeding pens approaches, Eve 3031 considers fighting him, preferring to lose their child that way rather than the horrific way that is intended.

Atalon arrives, full of taunts as always. Despite the leash around his neck Adam 3031 manages to kick Atalon in the stomach. The quisling is more outraged that Adam’s foot has gotten mud on his pristine white uniform than he is at the pain. (Atalon’s obsession with cleanliness is a clear reference to Doctor Mengele from the Nazi Death Camps.)

As punishment for the offense Atalon orders two nearby Death Breeders to take Adam 3031 off to be executed. The Death Breeders fly off on their hoverboards, carrying Adam between them while Eve 3031 screams and cries. Atalon taunts her that after her baby is extracted and served up as the piece de resistance at the alien dinner table another Adam will be assigned to her to replace the slain Adam 3031.

Atalon escorts the terrified Eve 3031 from the breeding pens to the interior of Death-Birth. They ride the pneumatic displacer (a futuristic version of an elevator) up to the dining hall. Out of pure sadism Atalon shows Eve the party of tentacled alien overlords who will be dining on her newborn baby as the crowning touch to their feast of human flesh.

Cut to the outskirts of Battle Creek, MI. One of the survivalists that the Freemen fought there a few issues back is visiting the grave of one of his comrades who died in that battle. He is scooped up by a mechanical arm of the tripod piloted by Skar, the yellow-skinned mystery being with a face that is just a mouth and a dark hole above it. (In my revisions the vehicle would be a triphibian craft instead of a tripod and Skar is named Warscar instead.)

Skar is still on Killraven’s trail at the behest of the High Overlord (Abraxas the High Overlord in my revisions). Skar/ Warscar extracts what info he can about K.R. and his Freemen from the survivalist, then drops him to his death as his head splatters against the tombstone of his fallen comrade.

Back with our heroes: Carmilla Frost and the injured M’Shulla have been left behind at Meig’s Airfield to guard the helpless Grok/Deathlok. Killraven, Hawk (Native American), Old Skull and Volcana Ash are creeping up on the gates of Death-Birth. The group banters and Hawk at one point tells Killraven that even though M’Shulla isn’t along for K.R. to play straight-man to, Volcana Ash’s tongue matches his.

The Freemen come upon the two Death Breeders who have brought Adam 3031 with them to kill him. Killraven attacks, defeats and slays the pair by tossing them to their deaths.

The spared Adam 3031 expresses his astonishment that it really IS the legendary rebel Killraven. He tells the Freemen that when you’ve lived the degraded, captive life that the Adams and Eves lead you stop believing in hope and rescues.

Killraven recognizes Adam 3031 from his “Vision” last issue, courtesy of The Power. Through the eyes of one of the alien overlords of Death-Birth K.R. saw Atalon force the chained Adam 3031 to lick mud from his boots. Killraven compassionately greets Adam, comforting him and eloquently restoring his crushed dignity.

Hawk, Old Skull and Volcana Ash watch as Killraven goes into another trance-vision. This time he is seeing through the eyes of one of the alien overlords as Eve 3031 is given pain-killers – but is NOT rendered unconscious, so that she must bear witness to her child being carved out of her womb by a new quisling called the Sacrificer and served up to the aliens.

At any rate, when this Vision breaks, Killraven knows where Eve 3031 is. The Freemen plus Adam 3031 fight their way through Death-Birth against legions of the Death Breeders in a race against time before the Sacrificer can slice out her unborn baby.

At the banquet hall, a Death Breeder announces the arrival of the Sacrificer to the handful of alien diners. Suddenly that Death Breeder is killed from behind by one of Killraven’s throwing stars worn on a bandolier across his chest.

The Sacrificer is at last glimpsed. He is dressed in various shades of green and gold, has a face as malformed as Atalon’s and wears an array of razor-sharp bladed cybernetic equipment on his amputated right arm.

With savage satisfaction Hawk slaughters the alien diners with his photonuclear rifle while Old Skull and Volcana fight more Death Breeders. When Killraven sinks his sword into a tentacled alien overlord who gets the jump on him, he feels the being’s “death” through its own eyes.

At long last K.R. realizes that his “Visions” happen when The Power enables him to enter the minds of random Martians/ Zetans. This is the first time this has been explained in the actual stories but I explained it properly earlier just to avoid confusion. Our main character also realizes that is why he got no “visions” at Battle Creek: there were no aliens around so there were no minds for him to enter.

Next Killraven sword-fights with the Sacrificer who, since this is pulp-fiction, is able to use his long bionic blades as weapons as well as surgical instruments. Volcana, Hawk and Old Skull wipe out more Death Breeders.

Presently Killraven outfights the Sacrificer and knocks him far away from Eve 3031 on the operating table. She and Adam 3031 embrace and cry with happiness, their discarded shackles lying at their feet while the Freemen appreciate the pleasant tableau.

Volcana Ash again flirts with K.R. who asks “Tell me, Volcana, when you’re … uh … amorous … can you control that heat of yours?” “That would be telling” she slyly replies.

That ends this particular issue but obviously our heroes are still deep in the heart of Death-Birth and still determined to free the Adams and Eves.

I’LL EXAMINE THE NEXT ISSUE SOON. KEEP CHECKING BACK FOR UPDATES.

FOR MY LOOK AT HOMBRE, SPAIN’S POST-APOCALYPTIC COMIC BOOK FROM THE 1980s, CLICK HERE

14 responses to “KILLRAVEN ELEVEN: THE DEATH MERCHANT OF CHICAGO”