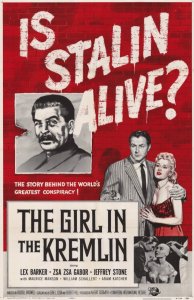 THE GIRL IN THE KREMLIN (1957) – The tagline for this Golden Turkey should have been “STALIN’S BACK AND GABOR’S GOT HIM!” The world of Bad Movies is pretty thoroughly littered with hilariously lame films proceeding from the premise that Adolf Hitler survived his supposed death and plotted a Fourth Reich.

The Girl in the Kremlin gives equal time to Hitler’s equally insane but even more murderous contemporary Joseph Stalin.

And feel free to choose your preferred caption to the photo at right. Either: a) ONE … MILLION … RUBLES or b) Zsa Zsa Gabor IS Mrs Kojak, this fall on the CW!

Adding to the joyously tasteless atmosphere of this flick is the fact that the guy playing Stalin is named Maurice MANSON! The Marilyn Manson and shock-rocker Hitler “Where Are They Now” Stalin jokes pretty much write themselves.

THE STORY: The Girl in the Kremlin begins in March of 1953, when in real life the subhuman piece of filth Joseph Stalin died. In this movie we see Stalin have a plastic surgeon transform a hapless stooge into a lookalike of the mad Soviet Dictator. (They Saved Stalin’s Face!)

The lookalike is killed and presented for burial while Stalin – who passed the time during the surgery indulging his famous fetish for watching a woman suffer a forced head-shaving – undergoes plastic surgery of his own to disguise his features. The murderous scumbag then flees Russia with – we are told – HALF THE MONEY IN THE SOVIET TREASURY plus a few aides including Nurse Grisenko, one of the twins portrayed by Zsa Zsa Gabor herself.

Years later, the OTHER Grisenko Twin wants to find her long lost sister and hires Private Investigator Steve Anderson, played by famed Tarzan actor Lex Barker. Anderson worked for the OSS during World War Two and has been making a living as a PI in Europe since war’s end.

Barker gives his character the kind of smug prick portrayal that George Nader could only dream of. While searching for the missing twin, Anderson discovers that she was really Stalin’s personal nurse and drops his client Zsa Zsa for withholding that vital information.

The Great Gabor begs and pleads with our hero to forgive her and once again take up the case. Naturally, he does so. Some of Steve’s former wartime associates are now highly placed figures in European Intelligence Agencies and one, Mischa Rimilkin (Jeffrey Stone), is a one-armed horndog who shamelessly flirts with Zsa Zsa right in front of him. (Once you have a man with one arm you never go back)

Anderson and Rimilkin exhaust their contacts while good-naturedly vying for the affections of the bland-to-the-point-of-comatose Gabor. At one point during the investigation Steve and Zsa-Squared even meet Stalin’s supposedly dead son Jacob, who lives down his shame in hiding. His shame for being Stalin’s son, that is, not his shame for being in this movie. Although …

Anyway, not even Jacob (William Schallert) has any useful info.

At their less than considerable wit’s end Steve and Mischa decide the only alternative left is to stop focusing on the obscure Nurse Grisenko and throw some unwelcome publicity at her alleged boss Stalin. Anderson and his client Zsa Zsa pretend to get married and plant news stories that former OSS man Steve has evidence that Joseph Stalin is still alive and at large.

This has the intended effect of flushing out the hidden dictator’s agents, since Stalin can’t take the chance that Anderson doesn’t really have some kind of proof. Multiple assassination attempts and death-traps later, Steve and Mischa track Joseph Stalin down to a monastery in Greece, where the madman has been living under the false name Count Molda.

SPOILERS: The “good” Grisenko Twin gets captured and reunited with her evil nurse sister for the ultimate in split-screen and shot/reverse shot cat-fights. Steve gets tortured by Stalin and his thugs and we learn that the murderous loon is plotting to return to the Soviet Union when the time is right, proclaim that he has risen from the dead and reassume national leadership.

Once the seemingly resurrected Communist Messiah is “back in the USSR” he’ll … uh, well, since he doesn’t have a Fourth Reich to launch like Hitler does in these horrible films, I guess Stalin will just make the Iron Curtain even iron-er. Or something. (I know, probably the old take over the world bit, but this film is so lazy they never have Stalin say it.)

We get more laughs from the fact that Joseph has apparently been spending the Rubles he absconded with like crazy, since he only has a few cabinets-full of cash left. Stalin and his goons obligingly have our captive heroes imprisoned in the same room as his remaining money AND a fireplace. D’OH!

Needless to say the good guys burn all of the daffy dictator’s Rubles, following which they escape confinement and engage in a running gunfight with the Commie No-Goodniks throughout the monastery. Just when things look their darkest, Son of Stalin shows up to save the day and take his crazed father down into death with him.

Mischa got killed during the closing action so Steve gets uncontested stud duties with Zsa Zsa and the world is saved from the prospect of a “newly risen” Joseph Stalin. Our male and female leads contemplate God’s Mysterious Ways before going off to produce a litter of presumably bland, dim-witted children.

The Girl in the Kremlin is fun but doesn’t play up its built-in campiness enough to make it a Bad Movie Classic. Plus sexy Wanda Ottoni is utterly wasted in a brief appearance at an outdoor cafe.

However, my fellow fans of Psychotronic films will enjoy the fact that one of Stalin’s accomplices is played by Aram Katcher, the Tractor Factory Commie from the Cold War potboiler Invasion USA (1952 version). +++