With comic books and their film adaptations dominating pop culture right now it’s time once again for the OLDEST superhero team in history: DC’s Justice Society of America. FOR PART ONE CLICK  HERE 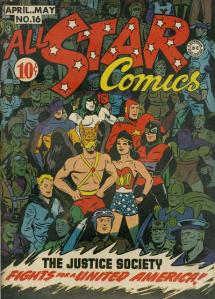 Title: THE JUSTICE SOCIETY FIGHTS FOR A UNITED AMERICA

Synopsis: The Justice Society of America steps in to thwart Nazi agents and infiltrators who are sowing discord and plotting sabotage across the U.S. The villains are especially active in industries vital to the American war effort.

The JSA battles the Fifth Columnists and recruits a “Junior Justice Society of America” to keep alert for signs of Axis agents. Our heroes defeat Nazis at the Bolton Steel Works, the Brackus Coal Mine and a southern Defense Plant.

They also shut down a Nazi propaganda publication called The New Way and stop the Axis from using America’s organized crime outfits against us.

A. My revised lineup of heroes would substitute the original Superman for the annoying Johnny “Jar Jar Binks” Thunder. Also, it’s tempting to substitute Hawkgirl for Hawkman in EVERY JSA story given how Hawkgirl has much more cultural cache these days because of her popularity in DC’s animated shows.

B. As usual I would also have Wonder Woman actively taking part in the adventure instead of the absurd way they had her serving as the JSA’s secretary. Yep, you’ve got someone as strong as Superman so relegate her to secretary duties back at your headquarters instead of taking her into action with you. Ridiculous.

C. I would, as always, keep the heroes together AS A TEAM instead of separating them for individual adventures like in the real story.

D. PART ONE – I would completely eliminate the silly “Junior JSA” from the story. This first part would feature our heroes’ old foes the Greyshirts, the army of American Nazi agents from the JSA’s second story. I prefer to bring them back rather than just have random Fifth Columnists at work. Our heroes would defeat the Greyshirts’ attempts to sabotage the Brackus Coal Mine and the Bolton Steel Works.

E. PART TWO – For variety I would have this part feature some Mussolini agents to break up the boredom of non-stop Nazis. “Mr Fortune” would be making a name for himself as a psychic/ seer able to predict the future. Soon he starts predicting industrial accidents, crop failures, etc and they all come true. The Justice Society would discover that Mr Fortune can’t tell the future, he’s just a Mussolini agent allied with the stateside Mafia to clandestinely make the “accidents” that hinder America’s war effort happen. The JSA would put a stop to it.

F. PART THREE – For variety I would make Agent Z an Imperial Japanese agent instead of a Nazi. He and his men would be running a pirate propaganda radio network in the U.S. to demoralize the nation in conjunction with The New Way, a fake newspaper pretending to “expose” the ways that the Allies are supposedly LOSING the war, despite official “lies”. Agent Z would be tracked down and exposed, plus his radio network and newspaper would be shut down.