JOE MAGARAC: NEGLECTED AMERICAN FOLKTALE – What Paul Bunyan was to lumberjacks, what John Henry was to railroad men and what Pecos Bill was to cowboys, Joe Magarac was to workers in Steel Mills.

Balladeer’s Blog examined Steel Man folktales and legends from both before AND after Joe Magarac’s rise to fame among Polish-American steel workers in Pennsylvania. CLICK HERE

THREE LABOR DAY MOVIES – In honor of Labor Day Weekend I reviewed three films that are very appropriate for that holiday.

That trio of movies:

APOLLO MISSIONS TWELVE THROUGH SEVENTEEN – Since the lion’s share of the attention always goes to the Apollo 11 moon landing I decided nothing could be more Balladeer’s Blog-ish than to cover the subsequent moon missions instead.

For a concise breakdown on those six missions just CLICK HERE

THREE BOOKS FROM THE GREAT DON SURBER – The one and only Don Surber churned out three of the most riveting and refreshingly offbeat political chronicles of recent years.

For Don’s books Trump the Press, Trump the Establishment and Fake News Follies of 2017 you can simply CLICK RIGHT HERE

RECENT MOVIES: SOME REVIEWS – Instead of the old Golden Turkeys or obscure foreign films that I usually review I gave in to reader requests and posted my takes on assorted recent big-name releases.

For my reviews of Solo: A Star Wars Story, Alien: Covenant, The Last Jedi, Trumbo and Ocean’s 8, as well as micro-reviews of Justice League and Avengers: Infinity War CLICK HERE 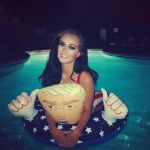 Those words perfectly describe the strong women and positive role models who participated in this account.

LINKAPALOOZA: SEPTEMBER 17th – I linked to multiple news items that tended to get overlooked. Click HERE