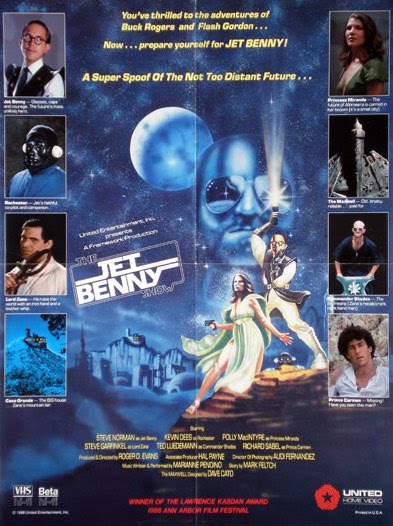 I was glad to finally see this video curiosity after having heard tantalizingly little about it over the years. It was not remotely worth the wait but it was good to see it and check it off my list, bird-watcher style, like I did with Ganjasaurus Rex years ago.

Yes, I know this overlong, under-entertaining Star Wars/ Jack Benny Show parody won a Kasdan Award in the 1980s but I think that winning that award says less about this project than does the fact that the people involved went on to do virtually nothing else afterward.

Roger Evans directed The Jet Benny Show from a script by Mark Felch. Steve Norman stars as Jet Benny, a take-off on the real-life comedy legend Jack Benny. Norman does not do nearly as good a Jack Benny impression as we’re led to believe by the few positive remarks this pant-load of a film receives.

Steve’s rendition of Benny’s voice is reasonable but wouldn’t stand on its own without the aid of his more than reasonable facial resemblance to the late comedian. The mediocre nature of Norman’s imitation might not have stood out so much if he wasn’t expected to carry almost every moment of the 77 minute run time.

Yes this slog lasts SEVENTY-SEVEN minutes and is centered around a central gag that would be straining to fill SEVEN minutes as a comedy sketch.

Rich Little, whose impression of Jack Benny’s voice blows Steve Norman’s away, was wise enough to know that even a quality Benny impression would grate on an audience’s nerves if sustained for too long. That’s why when Little expanded his classic Christmas Carol comedy routine to an hour-long television special he dropped Jack Benny as Scrooge and made W.C. Fields the tent-pole for the show in the Scrooge role. 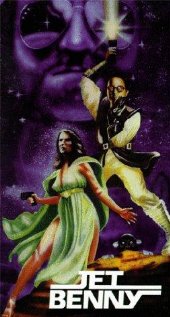 The first few minutes of The Jet Benny Show make a viewer optimistic. Norman as Jet Benny welcomes his female guest star Polly MacIntire in a black & white opening that perfectly captures the feel of the real-life Jack Benny’s program right down to the self-deprecating humor.

Then, the production switches to color and we realize that the rest of the way we are going to have to put up with a very lame Star Wars parody featuring “Jet Benny” as a Han Solo type of intergalactic rogue. Yes, in the right hands Jack Benny trying to play a badass Han Solo character would be HILARIOUS, but here nothing much is done with it.

Jet’s spaceship is called the Maxwell, which will please Benny fans since the comedy legend often referred to his fictional Maxwell automobile on his show. Remember, I admitted that these first few minutes of the movie make a viewer optimistic and the Maxwell bit definitely brought a smile to my face.

Jet’s co-pilot is a robot named Rochester (Kevin Dees), another half-decent Jack Benny reference, especially since the robot talks just like Eddie Anderson did as Jack’s frequent foil on Jack Benny’s shows. Unfortunately, after a few exasperated shouts of “RAW-chester” and “Now cut that OUT!” from Jet Benny this production goes downhill fast.

NOTE: Before we go further I need to get one big complaint off my chest. Despite the creative team’s obvious familiarity with Jack Benny and much of his lore they repeatedly make an enormous blunder regarding what may be Benny’s most well-known comedy bit.

That bit is when a crook is holding up Jack at gunpoint with the standard threat “Your money or your life.” Getting no response from his intended victim the impatient robber repeats his ultimatum to the legendarily stingy comedian: “I said your money or your life!” As even casual Jack Benny fans like me know, that is followed up by Benny’s classic reply “I’m thinking it OH-ver.”

Well, The Jet Benny Show presents multiple variations of the threatening setup, but when prodded for a reply Jet instead says “I’m thinking about it” rather than the REAL line. This is especially self-sabotaging because I genuinely think Steve Norman’s limited Benny impression could perfectly capture “I’m thinking it OH-ver” in grand style.

Moving on, the villain of the movie is Lord Zane, played by Steve Garfinkel with absolutely NO attempt to do a sendup of Darth Vader. Hell, he doesn’t even attempt a sendup of Ming the Merciless or any other sci-fi villain.

This utter blandness from the other cast members is part of the reason viewers are left with nothing but Steve Norman’s increasingly repetitious and tiresome Jack Benny shtick carrying the entire film. Richard Sabel as Carmen, the Luke Skywalker pastiche, likewise does absolutely nothing to convey that he’s in the Mark Hamill role. We only realize this from his outfit and the fact that he’s the princess’ brother.

There’s not even a joke about the awkward “Luke and Leia turning out to be siblings” situation. Instead, Carmen’s sister the Princess is named Miranda, setting up the audience for a lame Carmen Miranda joke that we have to spend over 40 minutes waiting for.

Even a bad-taste joke about Carmen ruining his face in a car accident would have at least been a little something. As it is MacIntire’s painfully colorless portrayal of Princess Miranda is as off-putting as it was inevitable by this point in the movie.

By the way, outside of these general similarities to Star Wars characters there’s no real attempt at comedic renditions of the Star Wars storyline. The overall plot in The Jet Benny Show is as listless and non-compelling as the worst dreck from Tom Baker’s 6th and 7th years of Doctor Who.

Many story elements are annoyingly pointless. Jet Benny and his Maxwell crash on a planet and are stranded for six years we are told. Why? No reason. They might as well have just had him crash-land and then soon afterward meet Carmen and Princess Miranda. No purpose is served by having Jet be a castaway for six years before anything happens.

A minute or so from the end the movie switches back to black & white to simulate the end of a comedy sketch on Jack Benny’s real-life shows. Jet thanks Polly, Kevin and Steve and teases “next week’s show.”

And that’s all. The creative team behind The Jet Benny Show doesn’t even do much with the intentionally cheap “Captain Z-Ro meets The Wizard of Mars” level special effects.

I’ve mentioned in the past that failed comedies are my LEAST favorite type of Bad Movies. I can get into bad sci-fi, horror, martial arts, safety films or any other example of badfilm, but something like The Jet Benny Show is so unentertaining I cannot recommend it on any level, not even the “so bad it’s good” level.

This thing is boring-bad, not fun-bad.