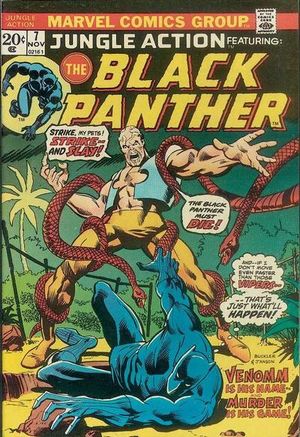 MARVEL’S BLACK PANTHER FILM HAS PROMPTED PLENTY OF READERS TO ASK ME TO REVIEW THIS QUINTESSENTIAL BLACK PANTHER STORY FROM THE 1970s. FOR PART ONE CLICK HERE

Synopsis: This issue picks up right where our cliffhanger ending left off last time around. N’Jadaka/ Erik Killmonger defeated T’Challa/ The Black Panther in battle and threw him to his supposed death over Warrior Falls.

Typically for fictional villains, Killmonger assumes the Black Panther could not have survived and leads two of his subordinate officers – Tayette and Kazibe – away from majestic Warrior Falls and toward their carefully concealed and camouflaged home village. That village is called N’Jadaka. Killmonger named it after himself by bestowing upon it his pre-revolutionary name.

Reflecting Erik’s contempt for T’Challa he is very blasé over what he thinks was the Black Panther’s death. He shrugs off Tayette and Kazibe’s obsequious praise and directs them to take in the masterful performance being given by the snake-dancer Venomm (see cover above).

Venomm is Killmonger’s only non-Wakandan follower and the two met in America before Erik’s return to Wakanda a few years ago. Venomm is a white man, has an acid-scarred face and has absolute control over Vipers and other poisonous snakes. He even wears a few Vipers on his person in battle and uses them to as much deadly effect as his lariat and whip.

Venomm – real name Horatio – has a poetic yet bitter nature and is the only one of Killmonger’s subordinates who is allowed to get away with treating Erik in a familiar manner. After Killmonger and Venomm trade a few Revolutionary’s Quips about their plans for Wakanda’s future Horatio heads off on his nightly assignment.

That assignment: overseeing the mining operation carried out by the Death Regiments. Every night Venomm and dozens of Killmonger’s masked elite warriors walk straight into Warrior Falls and into a secret cavern behind the Falls.

Each member of the Death Regiments wields a spear and a shield made out of vibranium, the fictional Wakandan ore that absorbs all energy including sound and vibrations. The mining operation has been going on for months and not only provides the vibranium for the Death Regiments’ weapons but serves other purposes as well.

Lest anyone find it odd that an elite corps of warriors carry out an activity like mining it is made clear that the soldiers themselves regard it as a privilege and an honor, given vibranium’s sacred nature in Wakandan religion and its importance to their revolutionary cause.

Vibranium absorbs all the sound caused by the mining operation so all the work is done in absolute silence. That silence is why Killmonger chose Venomm to oversee the mining, accustomed as he is to conveying silent orders to his snakes.

Meanwhile the Black Panther’s enhanced healing abilities, courtesy of the heart-shaped Panther Herbs that give him his powers, have enabled him to survive the rocky plunge down Warrior Falls. His unconscious body eventually floats by the skinny-dipping Monica Lynne, T’Challa’s Royal Consort, an African-American singing star from America.

The horrified Monica summons medical aide for T’Challa, who is completely recuperated by morning. Next our hero declares a week of mourning for the men, women and children butchered by Killmonger and his troops during last issue’s slaughter of a village loyal to T’Challa.

Don McGregor, the story’s writer, throws in some tidbits about Wakandan mourning rituals, some including the scraping out of turtle shells. After the meal on that first night of mourning T’Challa holds court.

The members of his court that we readers met last issue – W’Kabi the Security Chief and Taku the Communications Technology Chief, are joined now by a young firebrand named Zatana plus assorted older men whose names we are never told.

These “Cabinet Meetings” that get sprinkled throughout the 13 parts of Panther’s Rage are fun little bits of business. Looking at them from 2018 they play like combinations of meetings held on I, Claudius, The Sopranos, House of Cards and Monarch of the Glen with bits of Shaka Zulu and Star Trek: TNG thrown in for good measure.

Monica Lynne is permitted by T’Challa to sit in on the meeting, which bugs W’Kabi, who is also irked by the rabble-rousing Zatana’s overly aggressive way of challenging T’Challa’s policies. Zatana has no constructive alternatives to offer, he just makes snarky remarks about every setback for T’Challa, then pretends this makes him “bold” and “visionary”. (So, Wakanda has Democrats, too!)

At one point during the meeting the Black Panther informs his Advisors that he recognized Killmonger during their battle. N’jadaka, as he was then called, was one of the young male Wakandans seized for slave labor by the Nazi officer Ulysses Klaw when Klaw raided Wakanda during World War Two and killed T’Challa’s father.

(Obviously this timeline and other details have been retconned since 1973)

N’Jadaka had eventually ended up in New York City and was one of the few Wakandan abductees to turn up alive. A few years ago N’Jadaka was granted an audience with T’Challa at Avengers Mansion and he explained his plight to the Black Panther.

T’Challa had N’Jadaka flown back to Wakanda in a Quin-Jet and the abductee rejoiced at his return and lost himself in the jungle. Now the Black Panther knows what he’s been doing with himself this whole time: planning, then launching the ongoing revolt.

Meanwhile, Killmonger has been letting Venomm and the Death Regiments show less attention to stealth since he assumes Wakanda City is mourning T’Challa’s death, not the massacred village. He also assumes their presumed panic over the loss of their ruling Chieftain may make them vulnerable to a sneak attack over the next day or two.

That abandonment of stealth lets some of T’Challa’s roving patrols spot Venomm and the Death Regiments. The Black Panther takes the point, reaching Warrior Falls just in time to covertly follow Venomm and the D.R. through the waterfall and into the mineshafts.

Eventually Venomm attacks the Black Panther as the latter scouts the mining setup. A thrilling battle ends with T’Challa disarming Venomm of his lariat and whip, killing his two body-vipers and capturing the villain. +++

CHECK BACK TOMORROW FOR PART THREE.