What a year 2017 was! With so much going on there were stories I felt didn’t get the attention they deserve. 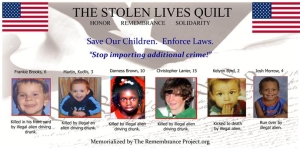 LAURA WILKERSON TO DEMOCRAT NANCY PELOSI: WHICH OF YOUR CHILDREN IS EXPENDABLE TO AN ILLEGAL IMMIGRANT? – Laura Wilkerson spoke truth to power at a CNN Townhall by mentioning the death of her son at the hands of an illegal immigrant and asked Pelosi the question that should be asked of ALL virtue-signaling Democrats.

Needless to say Democrats – who have become barely human political robots – tried their usual tactics of threats and character assassination against this brave woman.

FRANCE’S BRIGADE OF MOTHERS CONTINUES EXPOSING NO-GO AREAS IN THE FRENCH SUBURBS – The Brigade of Mothers continue doing the work that most Western “feminists” are afraid of doing: exposing the way that Muslim males impose 7th Century restrictions on women in the No-Go Areas that Western “journalists” like to pretend don’t exist.

The Brigade’s courageous reporting captures on film the REAL conditions that suffering Muslim women live under in free nations just because Left-Wing Archie Bunkers are too cowardly to speak the truth. But they pretend The Handmaid’s Tale will come true any day now. (Well, I guess it HAS, but since it’s being perpetrated by Muslims instead of Christians they’re too gutless to criticize it.)

A CONSEQUENTIAL PRESIDENT IN A TIME OF PYGMIES was a terrific piece which examined hundreds of ways that our de facto Third Party President Donald Trump has undone some of the damage done to the working class and the poor by the weak, inept and crooked little man named Barack Obama.

I don’t agree with every single item but it’s a great read and – no matter where you stand – I’m comfortable that the piece will remind you of how shallow the American media is.

As above I don’t agree with every single item that Dan From Squirrel Hill lists but it’s a handy reference guide regarding Obama’s ineptitude and corruption, and can easily be verified elsewhere on line.

DEMOCRATS LOVE VOTE FRAUD – As always, my emphasis on Democrat wrongdoing is NOT an endorsement of the Republican Party, it’s just that there’s no lack of negative coverage of the Republicans. The Democrat media tries to sweep their party’s misdeeds under the rug.

Democrat Andrew J Spiele in Virginia pleaded GUILTY to the still-frequent Democrat crime of submitting the names of dead people as Democrat voters to the Registrar’s Office. Spiele is just a small player, however. Bigger criminals like Hillary Clinton still walk the streets.

Tagged as Both Democrats and Republicans are Criminals, Both Liberals and Conservatives Suck, news, politics, WE NEED THIRD PARTIES