MANTIS 24: THE SWORDSMAN’S FUNERAL AND THE MYSTERIES OF MANTIS’ PAST 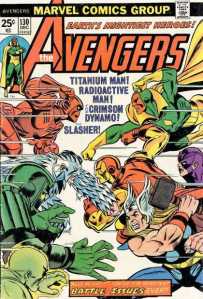 The Swordsman is dead. So is Moe Greene … Barzini … Tattaglia … All the heads of the Five Families. Today I settle all family business, Carlo, so don’t tell me you’re innocent. It insults my intelli- OH, sorry. I started channeling Michael Corleone there.

In any event the Swordsman (Jacques Duquesne) IS dead, to begin with. As dead as a doornail. SORRY! I promise that’s the last time I’ll do that! The Swordsman was killed by Kang the Conqueror last time around, giving his life to save his beloved Mantis.

Mantis, who was proven to be the mysterious Celestial Madonna that Kang is after, realized how much she really loved the Swordsman, despite her recent callousness toward him while she tried to romance the Vision away from the Scarlet Witch. She deeply regretted her actions, pleading with her dying lover to forgive her and to chalk it all up to her youthful pride.

Two or three days have gone by since the Swordsman’s death in Peking as the Avengers battled Kang. Our heroes have been mourning the loss of their comrade while regrouping and trying to comprehend the universe-threatening situation they have found themselves in.

And there’s a lot to take in:

*** It’s the first time an Avenger has ever been killed in battle.

*** The Madonna Star continues to shine brightly over Avengers Mansion. Crowds remain thronged around the mansion for blocks because of this strange phenomenon which has spawned rumors that the End of the World is near.

*** The shocking death of an Avenger has added to the grim environment, magnifying global fears of imminent doom. The international tension caused by Kang’s attacks in Egypt, at the U.N. and in China doesn’t help any, either.

*** Kang is still at large and still determined to have the Celestial Madonna.

*** Exactly WHAT the Celestial Madonna IS and how she affects all time and space is still not known.

*** The Vision and his teammates still cannot determine the cause of his recurring panic attacks/ deja vu traumas, more of which occurred while fighting Kang.

*** There is some speculation that the android Vision may be experiencing traumatic memories related to life experiences of the dead supervillain Wonder Man (Simon Williams), since HIS mental patterns were used for the Vision’s artificial intelligence. That was done back when Ultron-5 used them while creating the Vision as a weapon against the Avengers.

(NOTE: This was similar to the way Hank Pym’s OWN mental patterns were used on Ultron’s artificial intelligence, leading to Ultron’s oedipal obsession with the Wasp, the wife of his creator/ “father” Hank Pym.)

Returning to the action, the Avengers have held off burying the Swordsman to let Mantis make up her mind how she wants it handled. She – much more subdued now and genuinely anguished over her treatment of the Swordsman – wants to bury him in Vietnam, where they met. To her knowledge it was where the late Jacques Duquesne knew the most happiness.

No matter where they buried him the Avengers would have had to return to Vietnam to try to investigate more of Mantis’ mysterious past and try to learn how and why she affects the entire universe.

The sorceress Agatha Harkness forbids the Scarlet Witch to go with them, since it is crucial that Agatha’s tutoring of Wanda on the better use of her hex powers continues. The Scarlet Witch is still distrustful of the seemingly repentant Mantis, and is worried that she may try to put the moves on the Vision again while the Avengers investigate the Celestial Madonna’s past. But she obeys Agatha and stays behind.

Thor, Iron Man, Hawkeye, the Vision and Mantis take the Swordsman’s body in a Quin-Jet and fly to Vietnam. Once there they land at the Temple of the Priests of Pama, since Mantis decided the beauty of the surroundings was ideal for the Swordsman’s final resting place.

The Vision makes the mistake of asking Mantis if the beauty of the temple is the only reason or if she is finally beginning to remember being trained there by the Priests of Pama, like her father Libra claimed. Mantis coldly yells “NO” to cut off any further probing of this still-delicate topic.

Thor, Iron Man, Hawkeye and the Vision serve as the Swordsman’s pall bearers, carrying his body as they follow Mantis to a grove which is part of the temple grounds. Near a large, odd tree with smaller ones in a line (remember them) is the spot Mantis chooses for the burial.

The Swordsman’s body is placed on an altar near the trees and the Avengers pay their last respects to the man. Mantis sings a song of lament for her late lover, a very personal song in which she uninhibitedly lays bare all her pain and remorse as well as her good memories of her time with the Swordsman.

Hawkeye gets a nice character bit as he internally says goodbye to his mentor and later rival. He reflects on how he always thought of the Swordsman and himself as two of a kind.

He further reflects that he got a few crucial breaks that let him leave their life of crime behind years before the Swordsman was able to. He hopes his late friend somehow knows how sorry he is now for all the hard feelings between them over the years.

Next Mantis asks Thor, since he is an actual bona fide “god” to speak the eulogy. Thor does so and then, as Mantis watches, the other Avengers bury the Swordsman. Mantis places a flower on the grave as the group silently contemplates the scene for several minutes.

Moving on to their investigations into Mantis’ past there in Vietnam the Avengers encounter three super-powered operatives of the Communist Chinese government: Iron Man’s old foes Titanium Man and the Crimson Dynamo plus Thor’s old foe the Radioactive Man.

NOTE: Titanium Man and Crimson Dynamo were Soviet Russian operatives who clashed individually with Iron Man a few times and later sought asylum with the Chinese government to avoid punishment after their losses to Iron Man. The Crimson Dynamo caused the death of Tony Stark’s (Iron Man’s) girlfriend Janice Cord, adding to the tension.

The Radioactive Man always WAS a Chinese operative who battled Thor a few times AND served in Baron Zemo’s and Ultron’s teams of supervillains against the Avengers years earlier.

Back to the story: the trio of villains call themselves the Titanic Three and are a forerunner of the Soviet Union’s later Soviet Super-Soldiers. The Titanic Three deal out some harsh justice on a terrified North Vietnamese citizen as the Avengers watch.

The three point out to our heroes that they have no jurisdiction here and are tolerated merely as a diplomatic favor. The Titanic Three – “on loan” from the Chinese government to Vietnam’s government – will monitor the Avengers actions as they go about their investigation but warn them that THEY not them – are the authorities here and order them from the area.

Iron Man – for obvious reasons – is the most reluctant and wants to attack the Crimson Dynamo. Thor orders him not to, since the Titanic Three now enjoy the same kind of diplomatic immunity that Doctor Doom, the Mandarin and the Sub-Mariner do.

Iron Man disobeys him and Thor is forced to fight him in front of the amused Titanic Three. Thor gains a quick advantage over Iron Man and talks his old friend into standing down. He does and the Avengers move on to other areas of Vietnam, like the capitol city where Mantis says she recalls growing up as a street urchin..

The five Avengers must use the U.S. Embassy as a base while they conduct their search. (I know that doesn’t match up with what would be politically plausible at the time but, hey, it’s fiction.) They also use the embassy’s equipment to broadcast a repeating summons to the Kree superhero and Avenger called Captain Marvel. They hope his Kree knowledge might help since the Priests of Pama’s sect began in the Kree Empire thousands of years earlier.

Everywhere they go in the days ahead, people that Mantis says should know her insist they do NOT, adding to her frustration as it becomes more and more apparent that – as she feared – the memories of her childhood were programmed into her by the Priests of Pama. 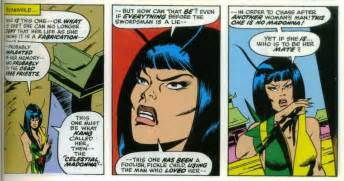 Mantis’ crimelord uncle killed all of those priests several installments back, so none are left to explain what special destiny they were seemingly preparing Mantis for with their training.

Meanwhile, a Vietnamese martial arts supervillain called the Slasher – later called Razorblade – has robbed some diamonds and is killing time waiting for his fence to meet him at Midnight. He catches sight of the Avengers in the streets below and mistakenly thinks they are after HIM.

The Slasher – so named because of the sharp-edged armor he wears, armor whose head-to-toe blades make his martial arts blows even deadlier than they would normally be – pretends to the Titanic Three that he is being harassed by the Avengers, in violation of the terms of them being allowed in the country.

He joins the communist operatives, making them the Titanic FOUR, and helps them when they attack the Avengers. The usual destructive battle takes place in the streets of the capitol city as our heroes fight the Titanic Four.

A mysterious Hooded Man dressed like one of the presumably-extinct Priests of Pama watches the battle from the rooftops, intensely interested in Mantis and her well-being. He’ll pop up again in our next installment.

Eventually the wild fight between super-beings causes the Slasher’s stolen diamonds to fall out of the hidden compartments of his razor-studded armor. His feeble explanations for them make it plain he’s lying and the Titanic Four realize he’s a thief and must be turned over to the law.

Thus the battle between the teams ends in a stalemate for now as the Slasher is arrested and the Avengers resume contemplating the mysteries of the Celestial Madonna.

Next time around things go back to being all “Timey-Wimey” as we catch up with Kang the Conqueror and his future self Rama Tut II. +++

24 responses to “MANTIS 24: THE SWORDSMAN’S FUNERAL AND THE MYSTERIES OF MANTIS’ PAST”