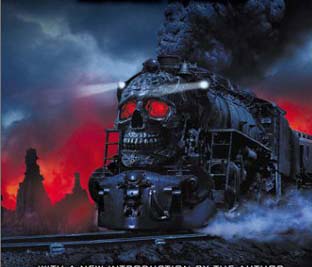 A MEXICAN MYSTERY (1888) – Written by W. Grove. (No other name available) This is the first of two novels by Grove. This one features a sentient and evil train referred to only as The Engine.

In 1864 Mexico the Emperor Maximillian holds a contest for the best design of a new locomotive. The winner or winners will be awarded a lucrative contract to build trains to run all across Mexico on rail lines already laid – a project overseen by a Scottish engineer named John Brown.

Brown meets Pedro da Luz, the wealthy descendant of Montezuma AND Spanish Conquistadors. The brilliant but mysterious da Luz works out of the Mexican town of Xiqipu and his train engine is a marvel of technology, capable of automatically handling many duties that other trains require human workers for.

One of those duties is piloting the train and another is the feeding of wood into the Engine’s furnace to keep it running. At the contest before Emperor Maximillian da Luz’s creation outshines all the other entrants, but then things begin to go wrong. The Engine has depleted its on-board supply of wood and, in its hunger, uses its mechanical arms to uproot telegraph poles, chop them up and feed them into its furnace. 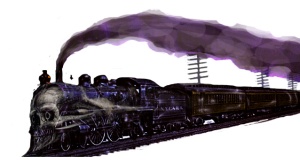 The furious Emperor disqualifies Pedro’s Engine and awards the prize to another designer. Da Luz rants and raves to such a bloodthirsty degree that his fiancee Inez dumps him, adding to his anger. Meanwhile, the Mexican people begin regarding the Engine with superstitious awe and claim it is possessed by the Devil.

Pedro da Luz pretends to be repairing the technical glitch in the Engine in order to remove it from the vicinity but in reality he makes further “refinements” to its programming. The next day da Luz feigns surprise when daybreak reveals that the Engine has apparently left on its own and is nowhere to be found.

The story unfolds as diary entries by the Scottish engineer John Brown, mentioned earlier. Da Luz turns up dead days later, a victim of a stabbing in Mestra. Mysterious events start happening at train stations throughout Mexico, like fatal accidents and the disappearance of wood for train engines. Water towers are drained in the dead of night as well. The missing Engine, apparently acting on its own, is sighted around the country.

As panic spreads, evidence mounts that the Engine has begun feeding on human beings who cross its path. In many areas of Mexico the land around rail lines and train stations become abandoned out of fear. The Bishop of Mexico organizes a cadre of priests to perform an exorcism of the railroads to stop the Engine’s reign of terror.

The exorcism goes wrong, however, and the sentient train attacks, grabbing a child with its mechanical arms. It tears the child to pieces and feeds the body parts into its engine, confirming the rumors about its attacks on humans.

Our Scottish engineer John Brown becomes a Captain Ahabesque figure after this outrage and gathers a band of men to follow him around Mexico trying to catch and destroy the bloodthirsty Engine. The sentient machine manages to evade Brown’s traps and outfight him and his men when cornered. The Engine uses its mechanical arms in battle but also shoots steam at its opponents, scalding them to death.

Brown and his men get in some licks of their own and manage to destroy one of the Engine’s mechanical arms during one encounter. At one point a letter mailed to Brown by da Luz before his death at last catches up with the Scotsman. The missive informs Brown that Pedro succeeded in providing life and intelligence to the Engine, which had already tried to kill him before he mailed the letter.

Da Luz’s closing lines terrify John Brown with the information that the dead Pedro even programmed the Engine with the capacity to design and construct more of its own kind.

The Scotsman intensifies his efforts to find and destroy the malevolent creation. Armed with elephant guns Brown and his men engage in a final battle with the Engine. Most of John’s men are slain by the mechanical menace but it seems to have met its own end by plummeting into a ravine after being damaged by the elephant guns.

Months later, however, John Brown begins to hear rumors that the Engine survived and is being worshipped by Mexican mountain tribes who feed it human sacrifices. Expeditions to learn the truth have either found nothing or have never returned, and on this chilling note (which nicely anticipates countless sequel setups in future fiction) A Mexican Mystery ends.

As always with these works of “ancient” science fiction I am astonished that this wonderful item is virtually unknown today. “W Grove” penned a followup novel in 1889 called The Wreck of a World, set in the “far future” of 1948.

The story depicts an army of sentient machines eventually beginning to overhaul other machines until an all-out Revolt of the Machines occurs. Humanity winds up being driven out of North America by that revolt.

I will review that sequel novel in the near future. ++