ANCIENT SCIENCE FICTION: THE MEN OF THE MOON (1809) BY WASHINGTON IRVING 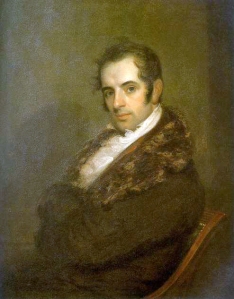 THE MEN OF THE MOON (1809) – Several decades before H.G. Wells would use his fictional invasion from Mars in War of the Worlds as an allegorical condemnation of colonialism the American author Washington Irving beat him to it. In Irving’s work The Men of the Moon a technologically advanced race from the moon conquered the Earth and treated its inhabitants the way that European and Muslim colonialists treated the indigenous inhabitants of the areas they subjugated.

Irving tongue-in- cheekly called his invaders from the moon “Lunatics” and depicted them as green-skinned humanoids with tails and one eye each instead of two. Their most bizarre feature is the fact that they carry their detached heads tucked under one arm with a spinal column “cord” attaching the head to the body. For refreshment the moon men drink liquid nitrous oxide.

After reaching the Earth in their spaceships the lunar invaders defeat the armies of the Earth by riding into battle astride winged horses with the heads of eagles. The moon men wear body armor that deflects the bullets and cannonfire of the Earthlings and return fire with solar-powered guns that Irving described as shooting “concentrated sunlight”. The invaders also employ huge catapults that fire enormous moon rocks.

Once the Earth has been conquered the “Lunatics” decide that Earthlings are savages because they don’t speak a word of the moon men’s language. The men from the moon also feel contempt for humanity’s primitive religions and way of raising their own families instead of rearing children communally. They’re also aghast that the Earth people don’t practice polygamy like they do.

Earth’s new masters take the world’s various heads of state (including Napoleon and President Madison) back to the moon to pay homage to the moon men’s ruler. Meanwhile the Lunatics move Earthlings to reservations in the middle of the world’s deserts and in the frozen polar regions. Citizens from the moon are given all the workable land on our planet and settlers from the moon begin to arrive in large numbers.

Unlike H.G. Wells Irving does not throw in a happy ending in which the invaders are defeated.

67 responses to “ANCIENT SCIENCE FICTION: THE MEN OF THE MOON (1809) BY WASHINGTON IRVING”