The one and only Wayne Rogers passed away recently and since everyone else will be covering his time on M*A*S*H, House Calls, Stagecoach West, City of Angels and more, Balladeer’s Blog will do its usual oddball salute. Here’s a look at Doctor Sex (1964) and The Astro-Zombies (1968), two of the films Rogers co-wrote and co-produced with bad movie legend Ted V Mikels. Wayne even has a tiny role in Doctor Sex!

DOCTOR SEX (1964) – Like Doris Wishman, Russ Meyer, Herschel Gordon Lewis and so many others, Ted V Mikels got his start as a director doing Nudie Cuties. For newbies to the realm of Psychotronic Psynema, Nudie Cuties were big in the 1950s and 1960s and despite their name NEVER featured nudity.

Toplessness and some butt-shots were all you got, with strategically and/or improbably placed branches, shrubs or rail fences covering pubic regions. Fans of Peter Sellers will remember the classic sendup of those nudie cuties that he worked into one of his Inspector Clouseau films.

The appeal of these movies is barely understood today, when you can find any visual stimulation you want with just a few clicks on your keyboard but decades ago Nudie Cuties really packed ’em in. Enter Doctor Sex.

The titular doctor is holding a brainstorming session with his fellow psychiatrists Dr Schmutz and the gorgeous Dr Lovejoy. They plan on co-authoring a book to put the recently released Kinsey Report to shame.

To that end they share stories about some patients of theirs who suffered exceptionally peculiar sexual fixations. The tales are told through flashbacks and feature:

a) A patient who fixates on having a dog’s-eye view to watching the sexy female owner of a pooch take her bath and other activities.

b) A patient whose work at a department store includes dressing and undressing mannequins and holding make-believe tea parties with them and otherwise treating them like they’re real women. In a horror film they would come to life and tear the man limb from limb or something but in this movie the patient just imagines that the mannequins come to life as incredibly beautiful women who want to hang around with him.

c) A female patient who loves taking her clothes off and, in a rags to even fewer rags story she becomes first a nude model and then a stripper.

And d) A patient who – in another idea torn straight from a horror anthology instead of a Nudie Cutie – lives in a house haunted by beautiful nude female ghosts. The ghosts do housework for the guy. No, I’m not kidding.

To wrap up their presumably successful venture Dr Sex and his colleagues cut loose with some lascivious behavior of their own. In the wildest moment Dr Schmutz turns into a dog and plans to use this canine form to land a sexy female owner so he can watch her bathing and in various stages of undress.

I have no idea why he thinks that’s better than just going out and starting a real relationship with a woman, but that bit of business nicely anticipates the man in love with a sheep portion of Woody Allen’s 1972 movie Everything You Always Wanted to Know About Sex.

Renaissance Man Wayne Rogers had an unbilled cameo as a man in a trenchcoat in Doctor Sex, and his writing credit was listed as Juan Rogero. 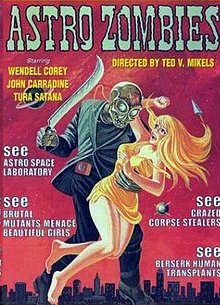 Astro Zombies is one big groan-inducing hybrid of science-fiction and horror. A mad scientist plans to use electronically controlled zombies as astronauts to avoid jeopardizing human astronauts.

His research is sought by rival intelligence agencies from around the world who want to use the astro-zombies instead as … well, as what is never actually spelled out. Probably as an undead army or such.

The creatures are powered by sunlight and there is a scene where an astro-zombie running low on power holds a flashlight up to its head to keep itself running.

Enjoy Carradine’s usual air of confusion, Tura Satana’s very odd sex appeal and Wendell Corey’s usual slurring of all his lines. If this movie didn’t tend toward boring-bad instead of fun-bad it could have been a Bad Movie Classic.