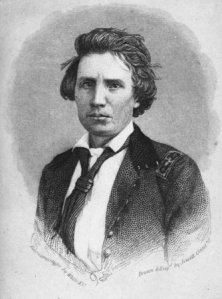 Comment: This unit of the American Army was named for its leader, Alexander William Doniphan, who had served in his native Missouri’s Mormon War of 1838. Though Doniphan led troops against the Mormon forces he was instrumental in sparing the life of the Mormon leader Joseph Smith, whom his men had captured.

In the Mexican War Doniphan led his eponymous “Thousand” in the longest geographical campaign since the days of Alexander the Great. Doniphan’s Thousand was with General Kearney when he took Santa Fe and in December they defeated  Mexican forces at El Brazitos on Christmas Day.

Later, outnumbered four to one, Doniphan’s Thousand crushed the Mexican Army at the Battle of the Sacramento. They even linked up with the main army in Mexico and paraded before General Zachary Taylor before returning to the United States amid much acclaim.

One response to “DONIPHAN’S THOUSAND FOR MEMORIAL DAY”